The second quarter earnings season continues in earnest this week with over 1,200 firms announcing results in the coming five days. On the heavily shorted side, there are 20 firms seeing more than 9% of their shares out on loan. 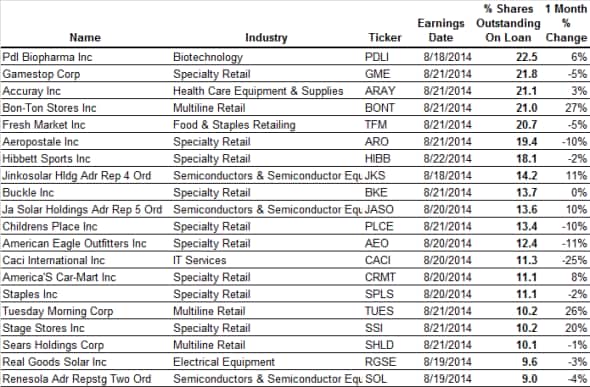 The most shorted company announcing results next week is PDL Biopharma which has 22.5% of shares out on loan. The firm has had to delay its earnings as it is trying to get clarification on how to account for royalty payments of recently acquired Depomed. 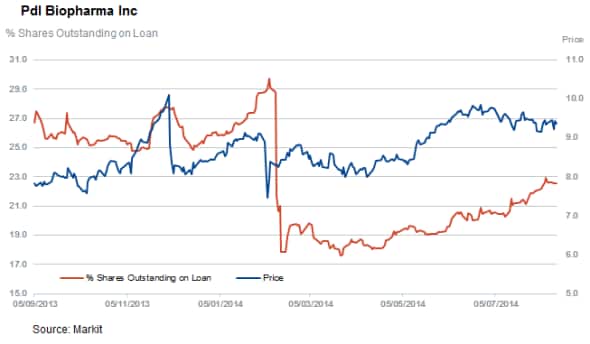 This comes at a time when short sellers have been taking a renewed interest in the company with short interest up by a quarter from the recent lows in March.

Also shorted in the health space is oncology firm, Accuray which comes in as the third most shorted firm. Accuray is not expected to turn a profit in the near future and has seen a pickup in short selling in the weeks leading up to its results announcement.

While biopharma firms make up two of the three most shorted names, retailers make up over two thirds of the most shorted companies announcing results next week and ahead of the crucial back to school shopping season.

The other firms seeing sustained short selling ahead of earnings are solar firms, with three Chinese based ADRs and one US firm making the most shorted list.

While the recent solar news out of China has been positive with the country recently overtaking the US in terms of install base, shorts continue to stay active in these names, particularly given the fact that energy prices seem to be on a downward slope.

Leading the pack as the most shorted firms are Jinkosolar and Ja Solar which both see more than 13% of shares out on loan ahead of earnings. 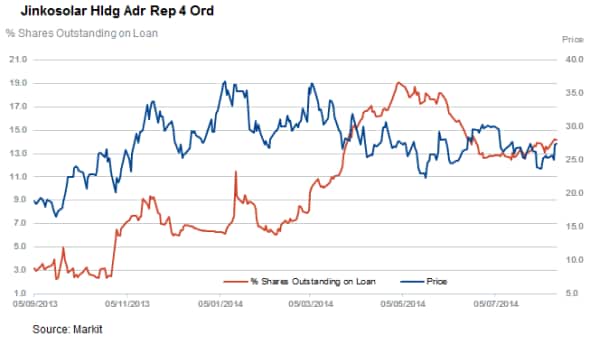 Europe sees relatively low earnings activity and as such only 10 firms see heavy demand to borrow in the lead up to results.

Topping the list as the most shorted firm ahead of results in the region is Koninklijke Bam which has just under 10% of its shares out on loan. The firms has seen its shares dive over the last few weeks after it announced the loss of a UK tender and weakness in German infrastructure spending. This news has seen shorts pile into the firm as current demand borrow is over four times higher than a year ago. 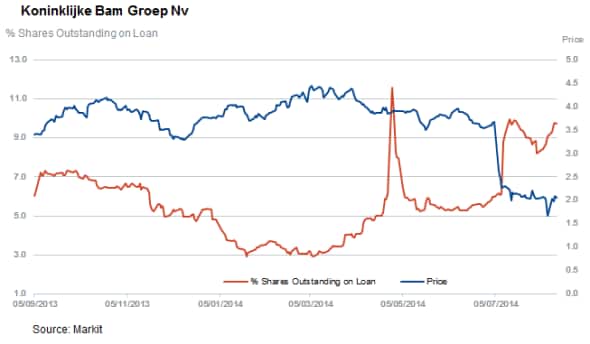 Another firms making the most shorted list is Heijman which has 3.5% of shares out on loan.

In the UK, IT services firm, Quindell is the most shorted firm with 7.8% of its shares out on loan. The demand to borrow shares of the firm climbed to record highs in recent weeks after rumours of possible trouble with the firm's partnership with the RAC was in trouble. 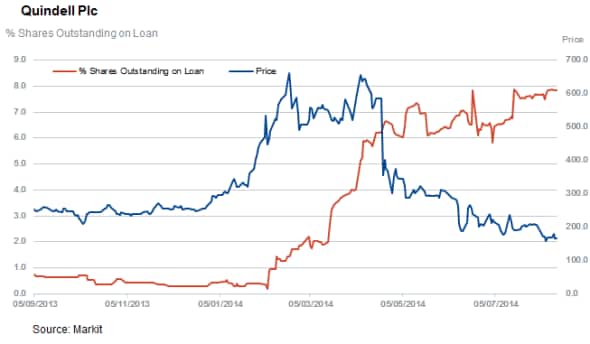 The other UK firm to see significant demand to borrow is New World Resources which has 3.7% of its shares out on loan. Short sellers have been closing out their positions in the silver miner, however, as the firm has seen its shares fall by over three quarters over the last year.

Asia also sees plenty of earnings activity with 17 firms seeing more than 5% of shares out on loan ahead of earnings. 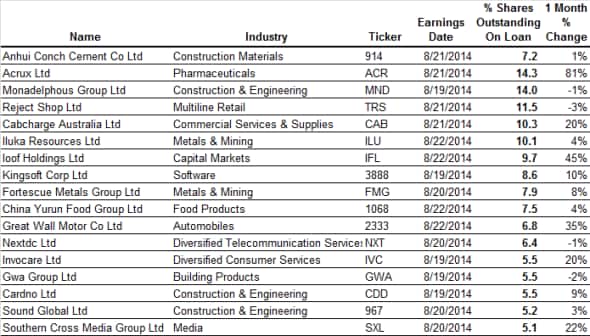 Hong Kong listed Anhui Conch Cement comes in as the most shorted Asian firm with over a quarter of its shares out on loan.

The possibility of a Chinese hard landing has drawn shorts to the name over the last six month, but its share price has been pretty resilient in the face of improving Markit PMI numbers. Shorts seem undeterred however, as short interest has stayed over 25% despite several price surges. 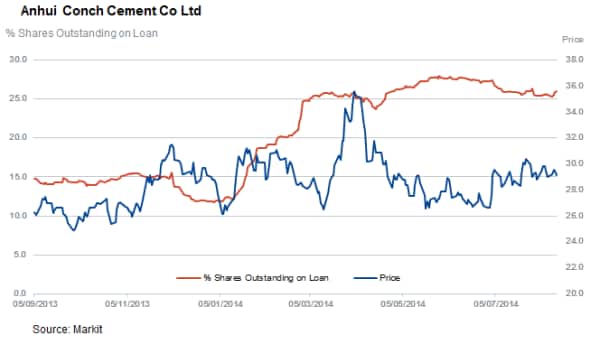 Australian firms make up the majority of heavily shorted names, with pharma firm Acrux which has 14% of its shares out on loan. Acrux has seen a surge in demand to borrow despite a US licensee having reported positive results in its testosterone therapy division. 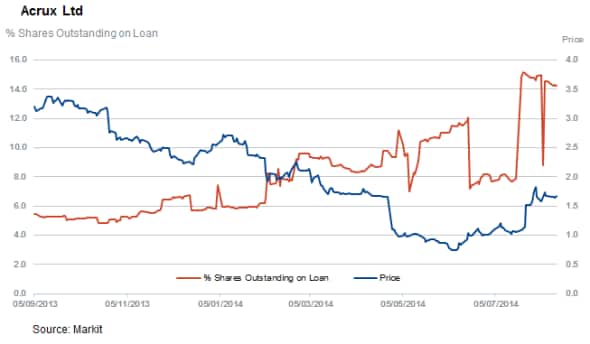 The country's mining industry continues to prove popular for shorts with both primary producers such as Iluka Resources and Fortescue Metals and support firms such as Monadelphous making the most shorted list.