Official data showed that Thailand's economy started on a strong note this year, expanding at the fastest pace in four years during the first three months of 2017, which confirmed earlier PMI survey results of faster growth. However, the very latest survey data pointed to a loss of growth momentum at the start of the second quarter.

The National Economic and Social Development Board announced that gross domestic product (GDP) rose 1.3% from the prior three months during the first quarter. That took the annual GDP rate to 3.3%, which is the fastest since the second quarter of 2013. Stronger household consumption and export growth more than offset weaker expansions of private investment and public spending.

The pick up in first quarter growth momentum had been signalled in advance by the Nikkei PMI, but the renewed dip in the PMI during April adds to concerns that the acceleration of GDP in the first quarter may prove short-lived. IHS Markit is expecting a GDP expansion of 3.1% in 2017, slightly lower than the 3.2% seen in 2016. 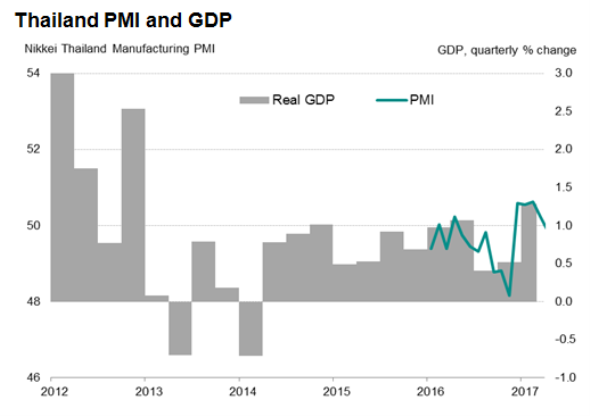 The April survey data showed that operating conditions in the Thai manufacturing sector deteriorated slightly after an improvement throughout the prior four months. Both PMI output and new orders indices sank to five-month lows. Inflows of new export orders meanwhile eased to show only marginal growth despite recent improvements in global trade conditions, which reflected weaker foreign demand for Thai manufactured goods.

Moreover, there were further signs of increasing pessimism about future prospects. Business confidence among PMI respondents for the year ahead sank to the lowest in the survey history, which could further weigh on private investment. Lower employment levels reported in the last three months added to the sense that firms have become cautious about the business outlook.

Subdued client demand meanwhile placed less pressure on operating capacity, resulting in Thai manufacturers reporting a fall in new work backlogs for the first time in four months. The drop in backlogs of work indicates the presence of spare capacity in the sector. As a result, firms will likely remain reluctant to increase staff headcounts in the months ahead. 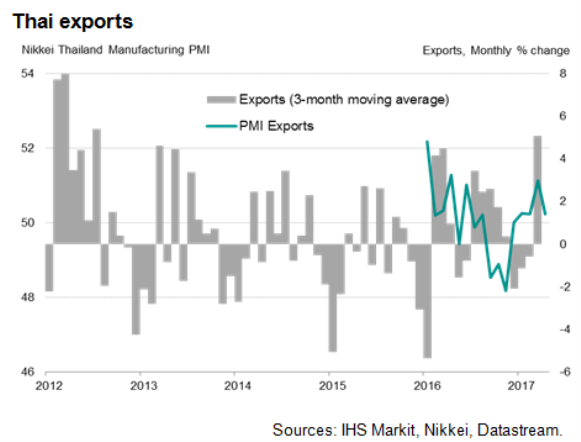 🇺🇸 US Manufacturing #PMI hit several new records in July, including the headline index (63.4) as goods demand and o… https://t.co/AwzEsGQaOf

Growth at Germany’s manufacturing sector gained momentum in July, with the #PMI at 65.9. A record rise in employmen… https://t.co/PJPNN0yzV4