After the IMF has downgraded its growth forecast for the global economy, data watchers are eagerly awaiting flash PMI results for the first available information on economic trends at the start of the second quarter. Meanwhile, the European Central Bank announces its latest monetary policy decision, while labour market and retail sales data are updated in the UK.

It is expected that the European Central Bank will leave monetary policy unchanged when it meets on Thursday. In March, the bank introduced more aggressive stimulus measures as inflation remained ultra-low and economic growth had been "weaker than expected" at the beginning of the year, according to Mario Draghi. However, the ECB's Nowotny stated that low inflation should not be "over-dramatized" and that the effect of the slump in oil prices should fade away in the summer, thereby automatically leading to higher inflation. Recent business survey data point to subdued growth in the first quarter of 2016, with PMI data consistent with growth of around 0.3%.

Eurozone economic growth and the PMI 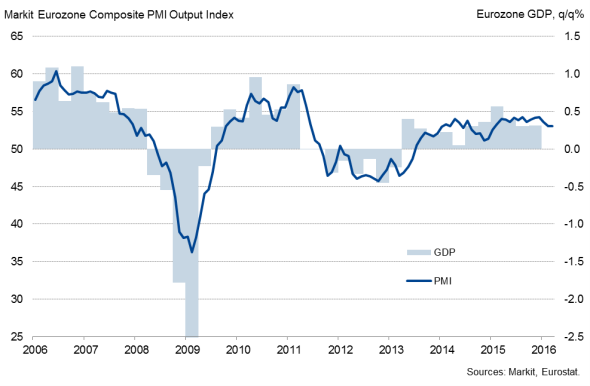 The release of Markit's flash PMI data for the eurozone will meanwhile provide policy makers with the first available information on economic trends in the region at the beginning of the second quarter after in March the PMI failed to gain significant traction from February's 13-month low. Moreover, the European Commission publishes latest consumer confidence data, providing information on how confident consumers feel about the overall state of the economy and their personal financial situation. In March, the index fell to a 15-month low of -9.7.

In the UK, the Office for National Statistics releases updated labour market data on Wednesday, which will include important information on wage growth. The start of 2016 saw UK unemployment fall and employment hit an all-time high. While pay growth also showed signs of picking up, it remained muted by historical standards. However, there are signs that the labour market is slowing, with PMI data signalling the weakest rise in workforce numbers since the summer of 2013. 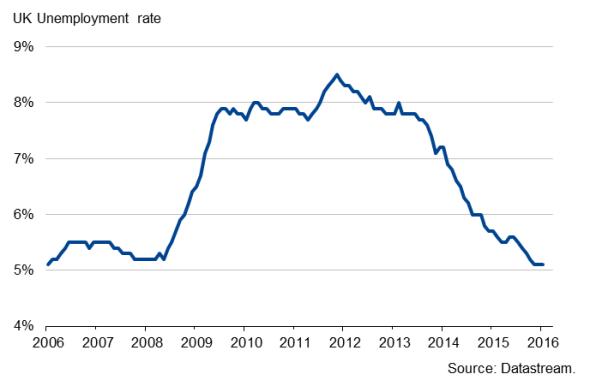 The release of retail sales numbers will provide further information on the health of the UK's economy in the opening quarter of the year. Data for the first two months of the year suggest that sales are running 1.6% higher than in the fourth quarter, pointing to consumers remaining in an upbeat mood so far this year. However, there are increasing signs that households are growing concerned about incomes, which could weigh on spending in coming months.

A big question mark hangs over the true performance of the US economy, with Markit's PMI data and the Atlanta Fed signalling a disappointing start to the year, while other institutions suggest the US economy grew robustly in the opening quarter of 2016.

Moreover, while the Fed's latest Beige Book highlights that manufacturing activity increased in most districts covered in late February and March, latest PMI data from Markit pointed to the sector's worst performance since late-2012, with subdued client spending patterns within the energy sector, ongoing pressure from the strong dollar, and general uncertainty about the business outlook continuing to weigh on industry during March, according to the business survey data. Markit releases flash US manufacturing PMI results for April on Friday.

US manufacturing output and the PMI 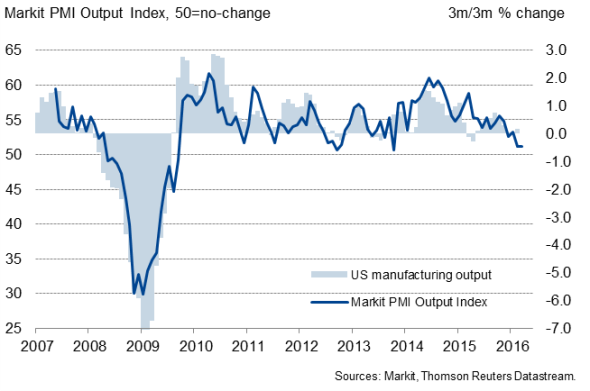 In Japan, manufacturing results for March suggested that the Bank of Japan may soon see the need for further stimulus, with the Nikkei PMI falling to its lowest level for over three years. Policy makers will therefore pay attention to Flash PMI numbers for April, which are out on Friday. The central bank ended its latest monetary policy meeting having taken no action but saying it was prepared to add more stimulus if required. The IMF has lowered its growth projection from +1.0% to +0.5% for 2016 and expects Asia's second-largest economy to contract by 0.1% in 2017.

The Bank of Korea announces its latest monetary policy decision.

Current account numbers are issued by Eurostat in the currency union.

In the US, building permit and housing starts figures are out.

In Germany, producer price numbers are out.

Latest jobless figures are out in Brazil.

Mortgage approval and existing home sales data are meanwhile issued in the US.

Initial jobless claims numbers and results from the Philadelphia Fed manufacturing survey are out in the US.

Flash PMI results for April are released in Japan, Germany, France, the eurozone and the US.

In Italy, industrial orders and retail sales numbers are updated.