China's economy expanded by 6.7% on an annual basis in the first quarter of 2016, down from 6.8% in the final quarter of 2015. This was the slowest expansion of GDP since the global financial crisis in early-2009, adding to evidence that economic growth looks set to slow for the sixth successive year in 2016.

The downward trend in GDP continued to reflect the Caixin/Markit China PMI survey data, which has struggled to remain in positive territory so far in 2016. The average Composite Output Index reading of 50.3 in Q1 was only just over the no-change 50.0 mark. 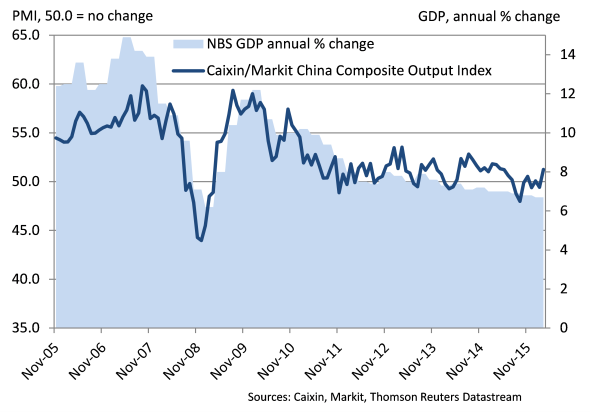 The monthly data do, however, suggest that growth may be picking up as we head into the second quarter. The March PMI survey results showed that China's economy rebounded slightly at the end of the first quarter, with the Composite Output Index posting at an 11-month high of 51.3, up from 49.4 in February. Renewed signs of life could perhaps indicate that stimulus measures taken by the government, such as lower lending rates and cuts to banks' reserve ratio requirements, are starting to bear fruit.

The uptick in the Composite Output Index at the end of Q1 was helped by stronger growth in services activity alongside a renewed rise in manufacturing production in March. Notably, it was the first time that manufacturing output had increased for a year, albeit at a marginal pace, as the sector continues to deal with the combination of weak demand and excess capacity.

Nonetheless, service sector growth remains slower than the long-term trend, indicating that there is still some way to go for the economy to transition successfully away from its industrial and infrastructure investment roots to become more consumption and services orientated. Moreover, the latest official retail sales figures indicate that growth in consumption continues to slow on an annual basis. 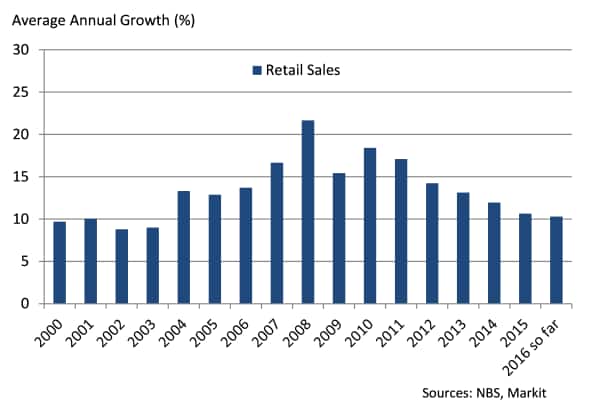 Even though growth momentum improved in March, further steep job cuts were recorded at manufacturers, while service sector firms reduced their staffing levels for the first time in over two-and-a-half years. Subsequently, the Composite PMI Employment Index showed the sharpest rate of job shedding since early-2009 as a number of companies remain concerned about the business outlook.

A spreading of the downturn in employment from manufacturing to services in March will be of particular concern to policymakers, who have hoped a stronger service sector could shoulder the burden of a declining manufacturing industry. Therefore, the deteriorating outlook for overall employment may encourage further stimulus measures in coming months. 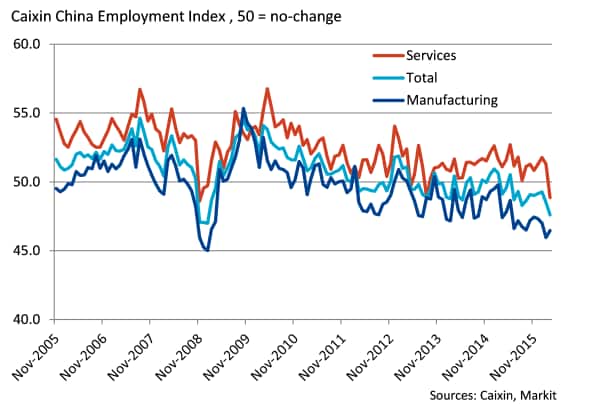 Chinese firms saw a faster increase in average cost burdens in March, with the Composite PMI Input Prices Index posting its highest reading since July 2014. This largely reflected renewed price pressures at manufacturing companies, which have experienced a modest recovery in the prices for key raw materials such as oil.

The return of inflationary pressures to China's economy suggests that stimulus measures have succeeded in staving off any fears of deflation, which can be detrimental to growth.

However, pricing power remains limited, as shown by only a slight rise in prices charged by Chinese companies, suggesting that demand conditions still remain relatively weak. As the official Consumer Price Index remains below the government target of 3%, there still appears to be scope for further stimulus to help boost demand and stem job losses. 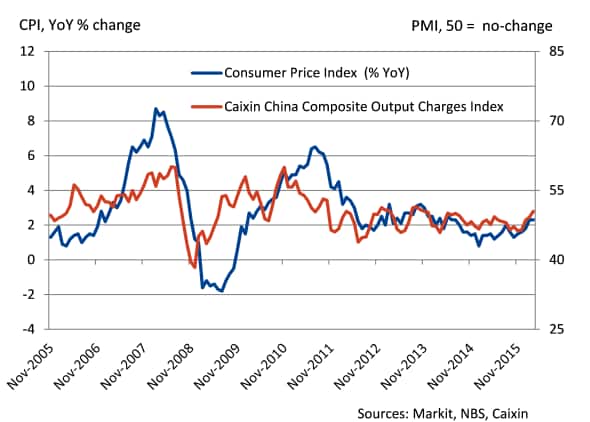