Record inflows into fixed income ETFs have seen assets under management surge to new highs, but should investors be concerned about liquidity?

As bonds continue to outperform other asset classes, fixed income ETFs have become a popular product for both retail and institutional investors. Assets under management (AUM) have grown from $87bn to $481bn in the last seven years. 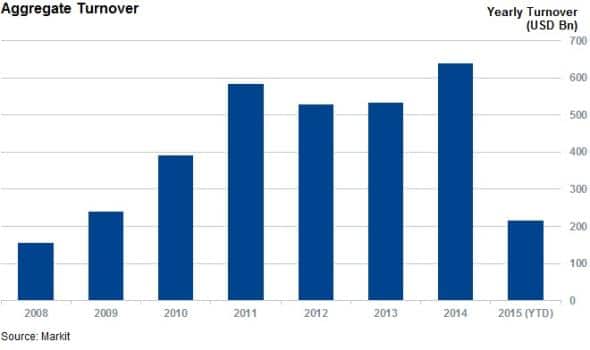 Fixed income ETFs provide investors with access to an asset class which traditionally has been out of reach. Their attractiveness is compounded due to these funds being easily tradable, tracking a representative benchmark and offering low transaction costs. Investors increasingly view fixed income ETFs as a viable alternative to an actively traded bond portfolio.

Trading turnover of fixed income ETFs in 2014 equated to $640bn, which was four times higher than the figure in 2008.

The increased popularity of bond ETFs has seen some market commentators raise concerns that the bonds tracked by ETFs do not provide enough liquidity to cover the asset class. With equity markets already providing ample liquidity, the bond ETF liquidity equation hinges on the ability of market participants to freely trade the physical constituents of bond ETFs.

These concerns stem from the fact that bond markets have historically been less liquid than their equity peers. Recent regulatory changes have made bond trading even less attractive to banks, which used to provide much of the market's liquidity.

This potential lack of liquidity could compound bouts of market volatility, when liquidity dries up and buying/selling bonds becomes difficult. This could in turn see the funds' price deviate from its NAV were market makers unable to source the underlying assets. However, ETF issuers have pointed out that they have attracted additional investors to the fixed income market (over $480bn) which itself has prompted liquidity to seep through to the secondary bond market.

Bond ETFs tend to be tied to liquid bond indices that offer a representative view of the bond market. Unlike most equity ETFs, bond funds give some discretion to the ultimate composition to help address some of the liquidity issues, but the assets that ultimately go into the fund still rely heavily on the underlying index.

The practices including indexing, sampling and the creation/redemption processes have evolved to ensure that bond ETFs maximise whatever liquidity exists in the bond market to avoid potential liquidity issues.

In the secondary ETF market, the fund is among the most liquid as it saw $32bn of aggregate turnover last year as AUM rose to $19.3bn. The fund has proved popular in 2015, attracting $2.7bn of inflows over the first quarter; the most of any fixed income ETF.

LQD is benchmarked to the Markit iBoxx $ Liquid Investment Grade index which is made up of over 1,300 dollar denominated investment grade issuances. A look at its holdings reveals that over 90% are index constituents.

Constituents of the iBoxx $ Liquid Investment Grade index and those of LQD have exhibited considerably more liquidity than the 16,500 investment grade $ bonds covered by the Markit bond universe in the first quarter of this year.

Executed trade volumes reported to TRACE on LQD constituents in the first quarter of the year averaged $413m, which is over four times the $97m of TRACE volume seen by the average $ investment grade bond.

This high average liquidity is not skewed by outliers as only nine (0.7%) of LQD constituents have seen less than $20m of TRACE volume over the first quarter of the year. This contrasts with 48% of bonds within the wider investment grade bond universe. In fact every single constituent of the LQD saw TRACE volumes in the first quarter, something not seen by 21% of US investment grade bonds.

This extra liquidity is also evident by LQD constituent bonds having seen twice the number of dealers willing to make a market, compared to the rest of the investment grade universe.

This helps to ensure that LQD constituents have an average Markit liquidity score of 1.1. This score is calculated using metrics such as bid-ask spread and depths of dealer quotes on both on individual bond and parent entity. The most liquid bonds earn a score of 1, on a scale of 1-5. 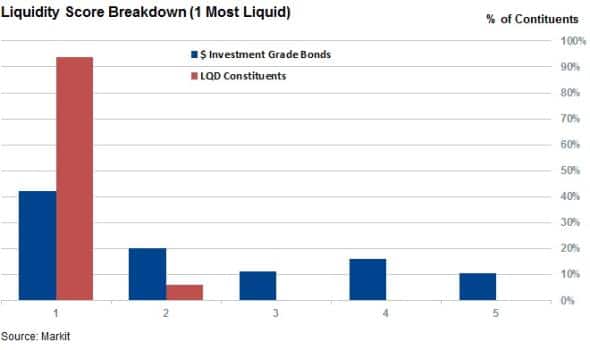 The bonds which make up the latest creation/redemption basket also exhibit the same strong liquidity metrics.

This ample liquidity means that the LQD has had plenty of liquidity to meet fund flows over the quarter. The largest daily outflow experienced by LQD since the start of the year occurred on March 11th with redemptions totalling $300m. However, this represented less than 5% of the average daily liquidity seen by its constituents which recorded an average of $6bn of daily TRACE volume over the quarter.

While this analysis makes no assumptions as to what would happen in the event of a severe bond market downturn, the last few months have seen their fair share of yield volatility as well as a couple of days when the LQD saw more than 1% of outflows. Despite these events, the fund never deviated by more than 3.5bps from its NAV.

Efforts to maximise liquidity amid increased investor appetite for bond ETFs have combined to make them a robust investment vehicle which is attractive to both retail and institutional investors.