High yield bonds have enjoyed a sustained rally led by Oil & Gas and Basic Materials, while the improved macroeconomic backdrop has seen investors use ETFs to express their views.

A rebound in commodity prices from February’s lows and stimulatory action from major central banks has improved global macroeconomic sentiment. As a result HY bond risk has fallen across the board, led by Basic Materials, Oil & Gas and Financials sectors.

Investors have been keen to take advantage of the improving macroeconomic backdrop by taking on risk through HY ETFs, due to their relative liquidity and ease to access. The last five weeks have seen consecutive inflows totalling $6.1bn, reminiscent of the inflows seen last October as global credit markets rallied on diminishing fears over a China/emerging markets slowdown.

ETFs have been increasingly gaining popularity amid volatile market conditions as a method for investors to express their macro view, due to their ease of access and liquidity.

This is particularly evident in credit markets, where underlying bonds are traded less often. As macroeconomic sentiment has improved, strong HY ETF inflows have followed. 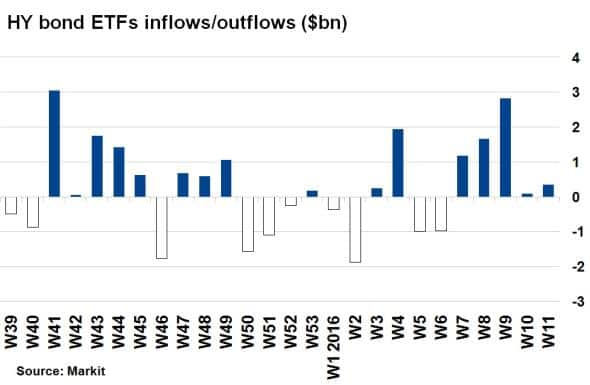 According to Markit’s ETP service, the week starting February 29th saw inflows of $2.82bn, the largest since the second week of October last year. In total, $6.1bn of new money has entered over the past five weeks - over 10% of total AUM in the HY ETF space.

Corporate bonds in Europe were buoyed by the European Central Bank’s aggressive stimulus measure last week, with spreads tightening significantly. The Markit iTraxx Europe Crossover, for example, tightened 50bps to 316bps on the day of the announcement. Coupled with Japan’s aggressive central bank measures and the rebound in oil and commodity prices, the Markit iBoxx $ Liquid High Yield Index has seen its annual spread over US treasuries tighten 24% since February’s recent wide point (589bps, from 776bps).

According to Markit’s iBoxx indices, the sector leading the recent rally in US HY bonds has been Oil & Gas, which has seen spreads fall 547bps since February 11th. This comes as no surprise given crude oil’s rebound, but spreads remain above 1,000bps, indicating distressed levels. Basic Materials has seen a 388bps tightening and average spreads are back below 1,000bps. While these two sectors have led the tightening in absolute terms, both represent around a fall in spreads by around a third, similar to the Utilities and Financials sectors, implying a broad based tightening.