Eurozone PMI ends 2017 on a high amid record manufacturing growth

The eurozone economy is picking up further momentum as the year comes to a close, ending its best quarter since the start of 2011. The strong end to the year suggests the economy will start 2018 on a firmer footing that many forecasters have been anticipating, suggesting upward revisions to growth projections are likely.

The European Central Bank nevertheless left policy unchanged on the same day that the flash PMI data were released, with the accompanying statement focusing not on upside risks but instead on the possibility of policy being loosened if conditions deteriorate.

Eurozone PMI ending 2017 on a high 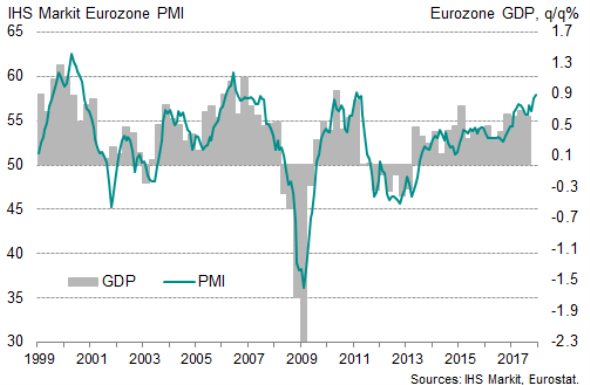 The headline IHS Markit Eurozone PMI rose to 58.0 in December, according to the 'flash' estimate (based on approximately 85% of final replies), up from 57.5 in November and its highest since February 2011.

At this level, the PMI is signalling an impressive 0.8% GDP increase in the fourth quarter, with accelerating growth seen in both Germany and France, where fourth quarter growth rates of 1.0% and 0.7-0.8% are indicated respectively.

France has been the big surprise this year, rapidly pulling out of its malaise to help shift the eurozone expansion into a higher gear.

The upturn continued to be led by manufacturing, where the headline Eurozone PMI rose to its highest since the series began in June 1997. Faster manufacturing output growth was accompanied by the largest monthly improvement in service sector activity since April 2011.

While manufacturing benefitted from the second-largest rise in export sales on record, the service sector is being supported by improved domestic demand within the single currency area.

Demand in the region's home markets is being buoyed by the improved labour market, with the survey showing new jobs being created at a pace not seen for 17 years over the past two months.

A record gain in factory payrolls helped offset a slowing in services job creation, albeit with the latter still the second-best in the past ten years. 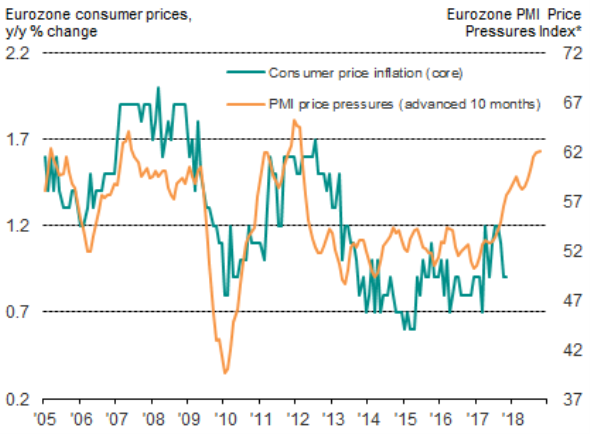 Despite the recent bout of strong hiring, capacity constraints continued to be reported, reflected in a further marked rise in backlogs of uncompleted orders. Backlogs rose especially sharply in manufacturing, where the past two months have seen a record increase on average.

Supply chains also continued to be stretched as a result of strong demand, with average delivery times lengthening to an extent not seen since May 2000 as manufacturers reported a record increase in the amount of inputs purchased.

The robust growth of demand and tightening labour market hint at rising core inflationary pressures as we move through 2018. Strong demand was a key factor helping firms hike prices. Average charges for goods and services showed a slightly smaller rise than the prior two months but still recorded one of the largest increases since mid-2011.

Higher prices also reflected the need to pass higher costs on to customers. Average input costs rose sharply again in both sectors, though especially in manufacturing. The overall rate of inflation dipped from November, but remained among the highest seen over the past six-and-a-half years.

The elevated levels of the PMI survey output and price pressure gauges mean that on both counts the data are firmly in territory that has historically been commensurate with a tightening of monetary policy.

However, the ECB left policy unchanged at its December meeting, saying interest rates will remain unchanged until well beyond the asset purchase programme has finished, which is scheduled to run until the end of September 2018 or beyond, if deemed necessary. 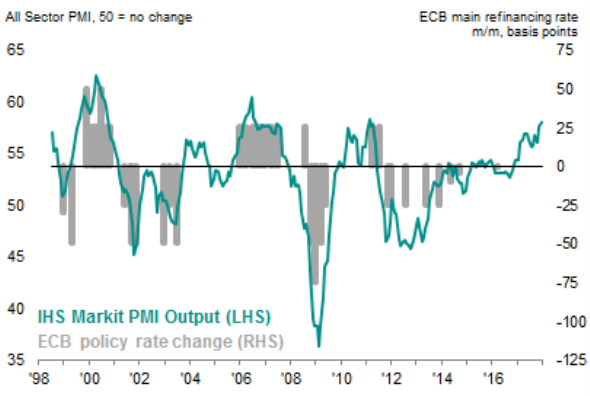