The pace of economic growth in Spain has held up well despite ongoing political stalemate, but signs are emerging that the lack of a permanent government is hurting some areas of the economy, including manufacturing production and investor sentiment. Pressure is therefore building on the politicians to find agreements and form a government before the situation deteriorates further.

Latest IHS Markit PMI data for Spain signalled that, while the service sector continued to expand at a solid rate during August, helped by record tourism numbers, the manufacturing sector appears to be heading towards stagnation. Production rose at the slowest pace since the end of 2013 amid a marginal gain in new work. Monthly official data on manufacturing production signalled the slowest annual rise for a year-and-a-half in July.

Meanwhile, factory employment growth slowed to a 27-month low as manufacturers displayed a reluctance to hire new staff in the face of weak order inflows. The increase in new orders in August was an improvement on falling new business in July. Prior to this decline, the rate of expansion had eased in each month since the start of the year, signalling a sustained slowdown in the sector. 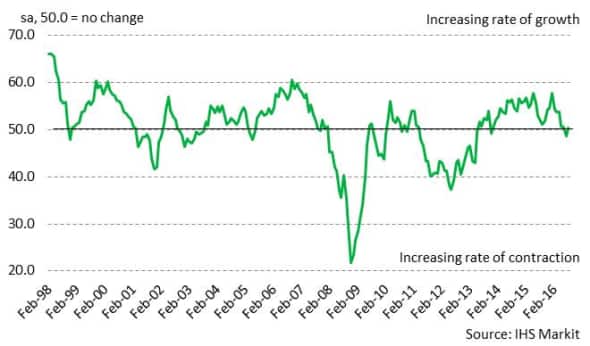 There have been some reports from businesses that the political situation has hampered business throughout the period of stalemate, but companies in both the manufacturing and service sectors have largely seen this outweighed by improving client demand. This doesn't mean that the economy hasn't been harmed by the lack of a permanent government - growth across both sectors in 2016 has been lower than the strong rates seen in 2015 and could potentially have been higher in a more certain political environment. 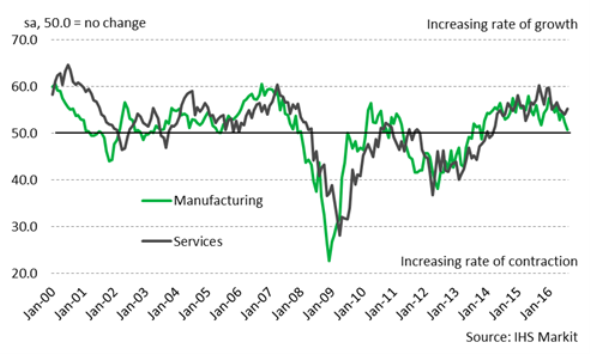 Investors wary of exposure to Spain

Other indicators also show negative impacts resulting from the stalemate. Exchange-traded fund (ETF) data from IHS Markit shows that investors are looking to reduce their exposure to Spain. Spanish-linked funds have seen net outflows in each month throughout the past year. 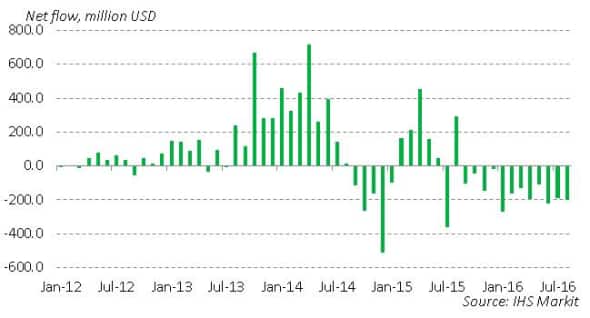 Looking at the latest official data, the detailed GDP release for Q2 showed that business investment, construction output and government consumption expenditure all rose at the weakest rates since the second half of 2014 amid a lack of certainty regarding investment decisions and a lack of authority at government level to commit to new spending (in fact both construction output and government consumption fell on a quarterly basis).

There is a sense that while the economy may be continuing to grow at present, the political impasse is storing up trouble for the future. In fact, while IHS Markit forecasts a healthy rise in GDP of 2.9% in 2016, this is forecast to drop to just 1.7% in 2017.

With incumbent Prime Minister Mariano Rajoy failing in the latest investiture vote at the start of September, the clock is ticking towards the October 31st deadline before a third general election will be called (currently scheduled for December 25th). The next political milestone is regional elections in Galicia and the Basque Country on September 25th which may lead to some further developments, but up until now there has been little sign of compromise from either of the two main parties.

Whenever the new government is formed they will be under real pressure from the European authorities to enact measures in order to bring the government deficit in line with targets demanded by the European Commission having consistently missed these in recent years and narrowly avoided being fined earlier in 2016. Any deficit reduction measures could exacerbate a slowdown in economic growth.