The Bank of Japan (BOJ) and European Central Bank (ECB) announce their decisions on policy and interest rates. Meanwhile, a second quarter GDP data release from China will be eyed for signs of the economy slowing. Other key data highlights include UK retail sales and inflation, which will help to gauge the timing of the first rate hike by the Bank of England, as well as Japan's trade data and Taiwan's export orders figures. 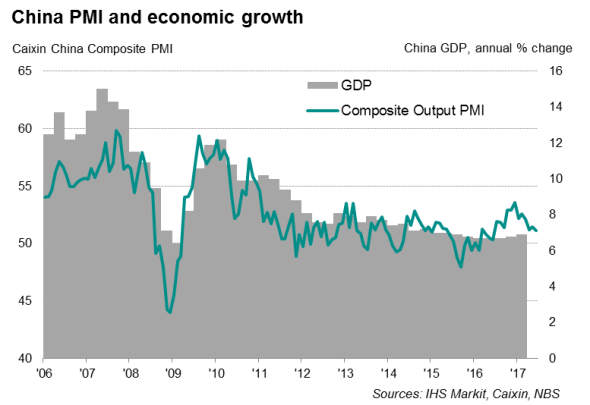 Worldwide releases of Business Outlook surveys, compiled by IHS Markit, will provide important signals as to business expectations for the year ahead.

The ECB's monetary policy decision is under the spotlight, with analysts looking for fresh signals as to the timing of a tightening of monetary policy after recent hawkish remarks from ECB President Draghi. Alongside PMI survey data showing second quarter growth running at a six-year high, signs of a further easing of inflationary pressures mean the central bank is likely to err on the side of caution. Nevertheless, Draghi's remarks have fuelled speculation that the ECB could announce a reduction in asset purchases as soon as September. 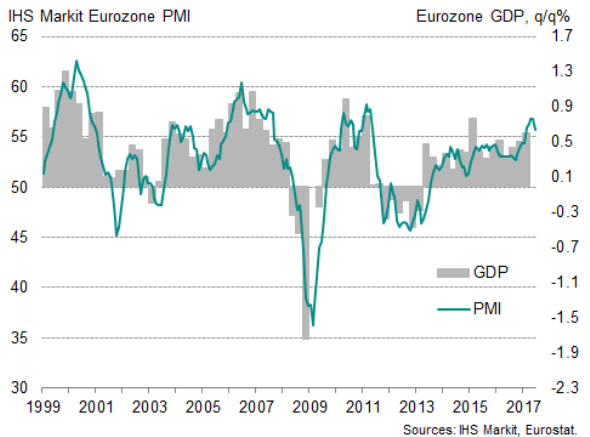 A steeper than expected rise in UK inflation has been cited as a reason for some Bank of England policymakers to vote for a rate hike, so the June CPI release will be eagerly awaited. At 2.9%, inflation not only surpassed the Bank of England's 2.0% target for a fourth month running in May, but also reached a near four-year high. The dilemma facing the BoE is that wages are consequently now falling at the steepest since mid-2014, underscoring how consumer spending - a key driver of the economy in recent years - is being squeezed. June UK PMI data showed the weakest expansion for four months that pushed the PMI into territory more consistent with the BOE cutting rather than hiking interest rates. June retail sales data will therefore also provide a big steer to policy.

In Japan, the BOJ is set to reveal its latest quarterly outlook report, containing new projections for economic growth and inflation, and simultaneously announces its policy decision. Changes to current policy are not expected as subdued inflation remains an issue. Despite mounting optimism of the country's growth outlook, BOJ Governor Kuroda reiterated that the current accommodative policy will be maintained until inflation is above its 2% target. Recent Nikkei PMI data indicated the strongest expansion for almost three-and-a-half years during the second quarter, encouraging firms to hire at the fastest pace in nearly a decade. Solid employment growth is welcome news for the central bank, especially if intensifying competition for labour starts to feed through to higher wage growth, which in turn, should help drive up inflation. Japan also publishes trade data, where exports are expected to continue growing at double-digit annual rates, as signalled by the PMI surveys. 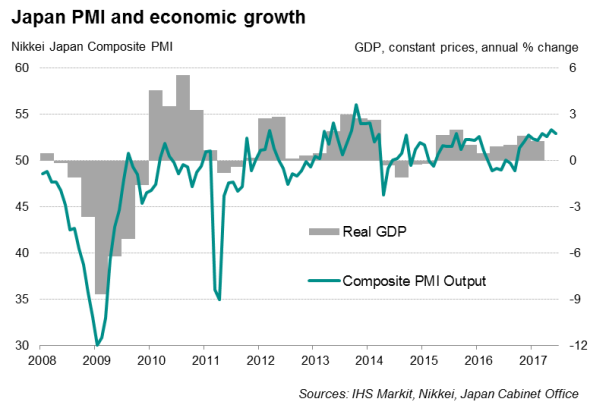 China's GDP figures for the second quarter are released next week, where expectations are for an annual growth rate of 6.8%, down from 6.9% in Q1. Recent Caixin PMI data showed that expansion in the three months to June was below that seen in the first quarter and lowest for a year, supporting the prevalent view of softer Q2 GDP growth and a slowing in the underlying pace of economic growth. Analysts will also monitor data on investment, retail sales and industrial production for trends in key growth drivers.