Last week, European banking bears were rewarded with one of their biggest paydays in recent memory when Spanish lender Banco Popular Espanol (POP) announced it was selling itself to rival Santander for a token Euro. This essentially wiped out any value for POP's long suffering shareholders and ensured short sellers stand to see the maximum return on the $200m worth of shares that were out on loan. This payday would have been even higher if lenders of POP shares did not sell out their positions in the closing days of May; by doing so, short sellers had to close out a third of their positions in the week leading to POP's forced takeover. 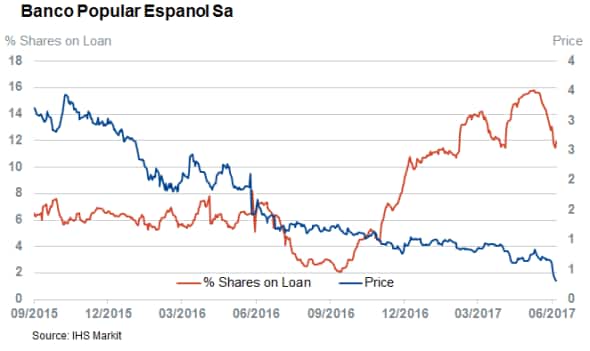 While bear raids on thinly capitalized periphery banks are not a new phenomenon, short sellers have been emboldened by recent successes as European regulators try to deal with the region's laggards. This trend has seen short sellers single out six Italian banks as each firm has more than 5% of its shares out on loan.

The current highest conviction banking short across the region is Banca Piccolo Credito Valtellinese Spa, which has 10.7% of its shares out on loan. This represents a three year high for the company after short sellers tripled their bets over the last 12 months. 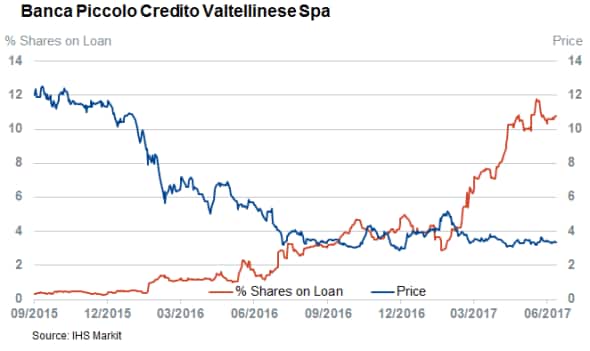 Unione Di Banche Italiane Spa is fast approaching its two compatriots in this list as short sellers increased their positions by over 50% in the last three months. The firms registered the largest relative increase in short interest following the POP volatility that resulted in an 8% increase in demand to borrow its shares over the last week.

The remaining three Italian short targets are Banco Bpm Spa, Bper Banca Spa and Banca Carige Spa, which have between 5-6% of their shares out on loan.

Despite regulator fears to the contrary, POP was the only high conviction Spanish bank short. None of the country's banks have more than 3% of their shares outstanding on loan as of latest count.

Regulators imposed a ban on shorting Liberbank shares despite the fact that shorting activity in the firm's shares was relatively low as less than 3% of its shares were outstanding on loan during the height of the recent volatility. Liberbank short interest increased over the last week, however, as the blame heaped on short sellers appeared to be overblown, given that less than 10% of the volume traded over the last week can be linked back to increases in short positions. 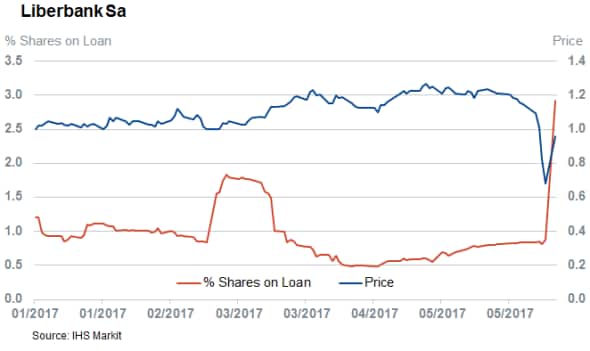 While there is no escaping the fact that periphery banks are disproportionally targeted by short sellers, it's worth noting that the largest Spanish and Italian financial institutions have so far failed to attract any short interest. Santander sees around 0.5% of its shares out on loan, while shorting activity in its Italian peer Unicredit is even lower; less the 0.2% of Unicredit's shares are currently out on loan. The volatility of the last few days has failed to change the minds of short sellers as demand to borrow shares in both firms has fallen over the last week.