Falling government bond yields in Europe have been boosted returns in the region, but investors still remain cautious on Portugal's creditworthiness.

Falling government bond yields across Europe have meant investors have been rewarded with impressive returns so far this year. One country however, continues to lag. Portugal has seen its credit risk hover at elevated levels and its government bonds have produced negative returns this year. 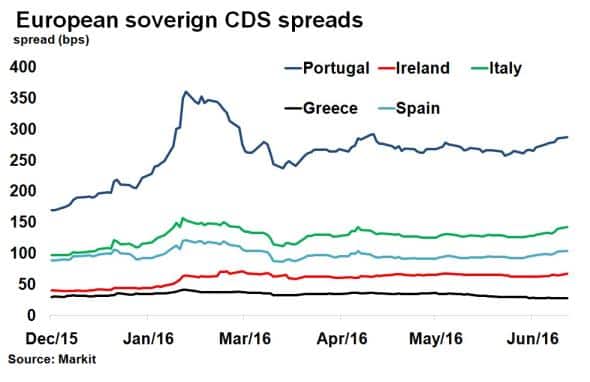 Credit investors have been treating Portugal with increasing scepticism since the beginning of the year. Portugal's 5-yr CDS spread, a measure of perceived credit risk, is 69% wider than at the start of the year according to Markit's CDS pricing service. Compared to its European peers, Portugal's 5-yr CDS spread is 2.75 times wider than Spain's, after being less than double at the start of the year, and is also currently twice as wide as Italy's spread.

Having been bailed out by Europe and the IMF in 2011, Portugal has struggled to shrug off its reputation as one of the eurozone's weaker economies. A large debt overhang continues to be a burden; at 130% of GDP and one of the highest levels in the eurozone, while economic growth has remained slow. Problems surrounding Europe's banking sector this year have also impacted Portugal. An already fragile banking sector, the country's biggest bank, Caixa Geral de Depositos, is now in dire need of capitalisation.

Further credit deterioration could mean further downgrade pressure from rating agencies. It could also mean losing access to ECB QE, should DBRS (the only rating agency to have Portugal as investment grade) decide to downgrade the name. The consequences may well deepen any economic crisis, leaving Portugal susceptible to another bailout. 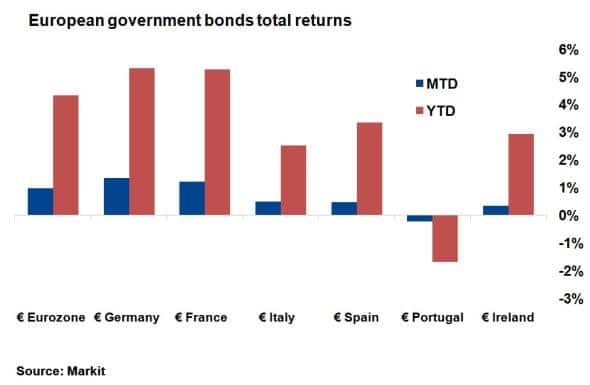 Year to date returns paint a similar picture, with the gap between Portuguese government bond returns and their eurozone counterparts' exaggerated. Markit iBoxx " Portugal index has returned -1.68% so far this year on a total return basis, while broader Europe has seen returns in excess of 3%. While tumbling government bond yields help boost bond returns in Europe, Portugal continues to deal with its own creditability agenda.