BoE weighs in on Brexit; Gap's risk surges on downgrade

In this week's credit wrap, Bank of England governor Mark Carney weighs in on the Brexit debate, US retailer Gap gets downgraded to junk and higher oil prices continue to moderate risk in the oil & gas sector.

As the UK's EU referendum nears, major financial institutions have started to up their rhetoric on the potential negative implications of an 'out' vote, with credit markets reacting positively.

Thursday saw Bank of England (BoE) governor Mark Carney reiterate his stance that a 'Brexit' would act as a major headwind for the UK economy and cast doubt over future inflation projections. The International Monetary Fund (IMF) also weighed in this morning by stating that subsequent uncertainly could lead to increased volatility in financial markets.

The possibility of a 'Brexit' has gained significant momentum so far this year and this has been reflected in movements in the credit markets. The UK's 5-yr sovereign CDS spread, a measure of perceived credit risk, more than doubled to 42bp by mid-April, from 18bps at the start of the year.

But as major institutions zoned in on highlighting the negative economic implications of a Brexit, led by US president Barack Obama last month, the UK's 5-yr sovereign CDS spread has tightened 17% to 25bps since then, according to Markit's CDS pricing service.

US retail under pressure 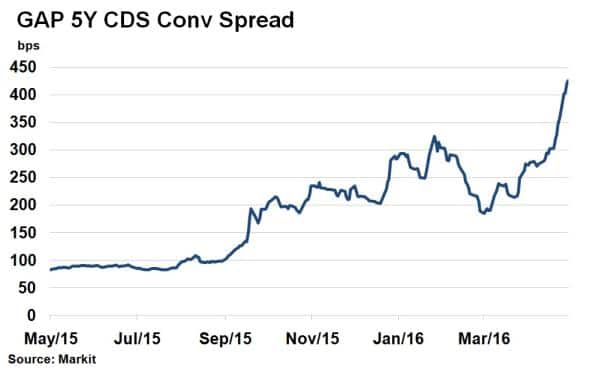 Unsurprisingly, credit markets reacted, with the cost to protect against Gap bond's defaulting rising. Its 5-yr CDS spread widened 68bps this week to 426bps, after having been as low as 190bps in mid-March. However, Gap's fate as a junk name isn't by any means confirmed, since Moody's and S&P, the other two major rating agencies, still have Gap's debt marked as investment grade. Gap's troubles are not isolated among the middle-market retail sector, with Macy's and Fossil also reporting weak earnings this week.

It's been an indifferent month so far for stock and credit markets but one sector continues to see welcome improvements. Crude oil prices have bounced more than 60% off February's lows to the benefit of the US high yield oil & gas sector. 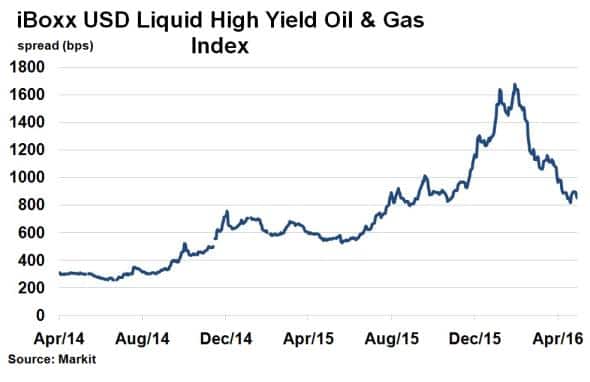 The Markit iBoxx USD Liquid High Yield Oil & Gas Index has seen its spread (interest premium over US treasuries) fall over 50% to 853bps, close to six month lows. The sharp tightening in spreads has benefitted the wider US high yield bond market since the oil & gas sector is the largest among the wider Markit iBoxx $ Liquid High Yield Index, representing around 10.5% by index weight.