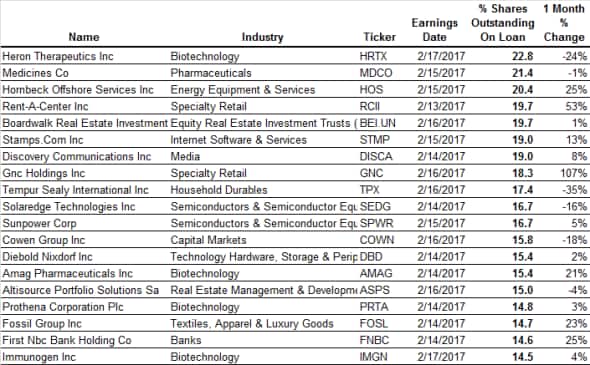 Having by and large retreated from energy names in the 12 months since oil registered its recent lows, short sellers have refocused their attentions on healthcare names this earnings season. This trend sees Heron Therapeutics top this week's most shorted ahead of earnings list as 22.8% of its shares are out on loan. While certainly high now, this the demand to borrow Heron used to be even higher as short sellers had borrowed more than 30% of the firm's shares as recently as a month ago. 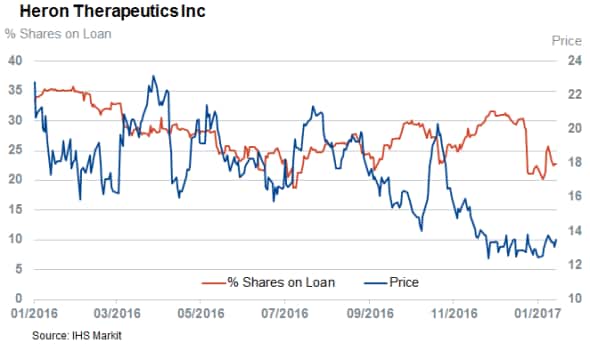 Pharma firm Medicines Co also makes the most shorted ahead of earnings list although the short interest is probably inflated by its reliance on convertible bonds, which means that a large portion of the borrow is likely to be arbitrage driven.

Solar firms haven't experienced nearly the same amount of covering as their conventional peers. Two solar firms, Sunpower and Solaredge, both make this week's list of heavily shorted names. Both have been profitable short targets over the last 12 months as their shares have fallen by 70% and 46% over this period respectively.

While healthcare firms top the list of this week's most shorted firms ahead of earnings, retailers have seen the largest increase in the weeks leading up to results and we've seen large increases in the borrow demand for Rent-A-Center and GNC over the last month. Both firms have already preannounced disappointing earnings which has driven this large jump in shorting activity. 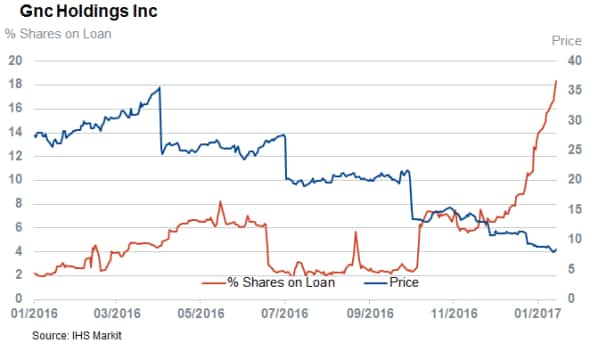 Airline firms are a focus for European short sellers this week as Norwegian Air Shuttle and Air France KLM feature as the first and fourth most shorted firms ahead of announcing earnings.

Norwegian is no stranger to short sellers, after its long running feud with regional rival SAS saw both firms experience significant short interest. Short sellers were starting to warm up to Norwegian, as demand to borrow the firm's shares had come way off the highs registered a couple of years ago but the UK's decision to leave the EU has seen the firm come under renewed pressure from short sellers as Norwegian operates long distance flights out of the UK. Norwegian's current short interest is roughly twice the level seen on the eve of the EU referendum while its shares are down by over 20%. 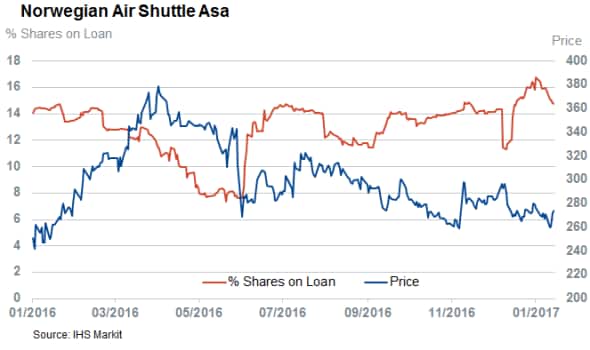 Air France KLM has seen similar fluctuations in its short interest over the last 12 months. Short sellers covered half their positions after the firms posted better than expected third quarter earnings but have returned to the name in earnest over the last few weeks as the subsequent rally proved short lived.

UK packaging firm Essantra is another firm seeing large jumps in shorting activity in the run-up to earnings. Short sellers increased their position in the firm by 16% in the last month after it issued its third profits warning in less than a year.

Japanese firms continue to make up the majority of the most shorted Asian firms announcing earnings this week. Mobile games maker Mynet tops this week's list as just under 15% of its shares are out on loan to short sellers. Much like Nintendo last summer, the bulk of Mynet's short interest came after its shares registered more than doubled in price. This scepticism has been vindicated in subsequent weeks as Mynet has been unable to sustain the rally in its share price. 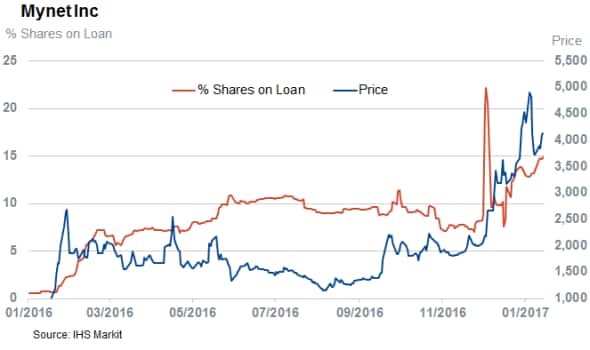 Fellow mobile games developer Ignis also makes the most shorted ahead of earnings list as it has 9% of its shares out on loan.

While short sellers are focusing their attention on software names, hardware manufacturer Nikon has seen the opposite as its current short interest is roughly a third of the levels seen 12 months ago. This covering has been spurred on by the firm's efforts to shed jobs and divest from loss making end markets.

Australia also features on the list of heavily shorted firms ahead of earnings after Invocare and Perseus mining both saw large increases in short interest over the last few months.