UK inflation rose to a near six-year high in November, and chances are that it could rise further before starting to ease again later in 2018. The upturn pushes the inflation rate into letter-writing territory, forcing the Bank of England's governor Mark Carney to explain the overshoot relative to the 2% target to the Chancellor and outline the policy response.

Naturally, the increase will fuel expectations that interest rates could soon rise again. However, with the inflation rate being pushed higher predominantly by the twin forces of higher oil prices and the weak exchange rate, the likelihood is that the rate will soon start to cool again as these pressures abate. Instead of the current inflation rate, the most important trigger for higher interest rates will be wage growth, which has so far remained stubbornly anaemic, meaning the focus now shifts to tomorrow's labour market data.

Inflation edges up to near six-year high

Data from the Office for National Statistics showed consumer prices rising 3.1% on a year ago in November, up from 3.0% in October and its highest since March 2012.

Notable upward pressures came from the transport sector, blamed on air fares, as well as household services, recreation and culture, food and drink, as well as restaurants and hotels.

Hopes that inflation had peaked at 3.0% have been dealt a blow by the recent increase in the price of oil. Brent crude prices jumped in November. More upward pressure from oil may be seen in coming months: Brent crude rose just over 10% between mid-October and mid-November, and has since gained another 4%.

Recent survey data also hint that inflation has yet to peak, in part reflecting the need for firms to pass higher costs on to customers. The PMI surveys showed average prices charged for goods and services rising to the greatest extent for nearly a decade in November. Such steep upward pressure on costs tends to eventually feed through to consumers.

However, three developments should help cool inflation as we move through 2018, albeit with the inflation rate merely down to around 2.5% in late 2018. First, the impact of the weaker exchange rate will soon start to work out of the annual comparisons. Second, we expect to see oil prices retreat in 2018 as supply increases. Third, subdued economic growth in China should help keep a lid on commodity prices more generally.

The impact of the upturn in inflation at a time of subdued wage growth is already clearly evident on spending. An index of consumer expenditure compiled by IHS Markit from Visa data, for example, showed total spending falling 0.9% on a year ago in November, down for a third successive month.

Our survey of UK households meanwhile showed the strain on finances intensifying in November, linked to weak pay growth and rising prices. 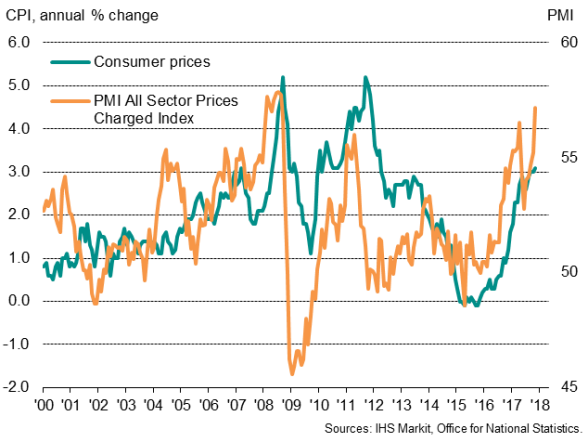