To get a full copy of our Brexit trading update please email Comms@markit.com

The one silver lining to come out of the first post Brexit Markit UK Manufacturing PMI survey was a slight pickup in export orders as overseas buyers took advantage of the plunging pound. This delivered little in the way of relief however, as both services and manufacturing indicated that economic growth stalled in the wake of the referendum. While the relative resilience of exports was ultimately unable to jolt the UK from a post Brexit slump, the phenomenon is helping lift UK shares which derive a high proportion of their business overseas past their domestically exposed peers.

Back in early June, we posted that investors would be best protected from the worst of the post referendum volatility by positioning themselves in baskets of UK shares which derive a high proportion of their revenues from outside the UK and European Union. This strategy is playing out in the weeks since the referendum as the export baskets of both the deep value and value momentum strategies have outperformed the domestically exposed UK peers.

Most of the post Brexit performance on both strategies has been delivered by surging exporters as the undervalued exporters basket surged by 7% in the month since the vote, while undervalued positive momentum exporters were up by an even more impressive 8.9% over the same period of time.

The underperformance of domestically exposed firms has not gone unnoticed from short sellers as the domestically exposed basket of shares across both strategies has seen a large rise in shorting activity in the six weeks since the referendum. Exporters on the other hand have seen little in the way of shorting activity with short sellers covering their positions among the firms that make up the strong momentum undervalued basket.

Overvalued firms with poor share price momentum have proved to be the short favourite as this basket of shares has seen a 29% jump on average shorting activity since the referendum. These firms include heavily shorted retailers such as Sainsbury's and Tesco as well as service providers such as Whitbread and the AA who now have 2.8% of their shares shorted on average.

This surge in demand to short domestically exposed UK firms now means that short sellers were more active in the FTSE 350 index in the weeks following the referendum than at any time in the last two years. 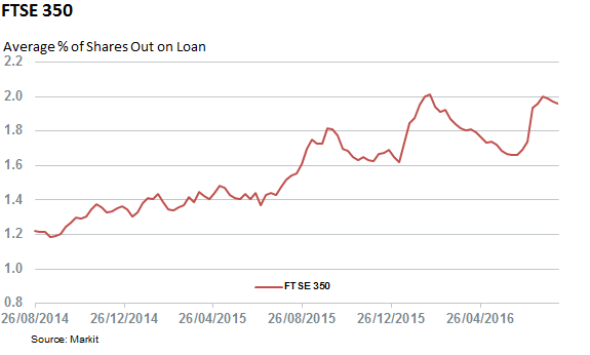 While the average short interest across the index has tapered off somewhat in the last two weeks, the current demand to sell the index short is still over 15% higher than on the eve of the referendum which indicates that short sellers are not going anywhere.

Join us for an upcoming webinar discussing key lessons about future operating models and the ability to scale up co… https://t.co/Hkv5quwDAe

RT @CERAWeek: In the latest #CERAWeek Conversation, @IHSMarkit CEO @LanceUggla is joined by former Governor of the @bankofengland Mark Carn…