Driven by the 'Draghi Rally' and after posting two months of positive returns, momentum has faded and investors have sold off European equities - particularly those carrying high levels of net debt exposure.

After being briefly lifted along with a broad market rally during March and April, May 2016 has seen European firms which have high amounts of debt continue their slide in May, according to Markit's Research Signals Net Debt Ratio* factor.

The 10% of European companies with the largest amount of net debt on their balance sheets enjoyed a brief respite in March and April when Mario Draghi's expanded quantitative easing program saw these shares outperform the market for two consecutive months for the first time in over two years, but the rally proved shortlived.

This shunning of leverage is nothing new as the companies with the worst leverage ratio have underperformed the European market in 18 out of the last 24 months for a cumulative underperformance of 18%. This goes to show that the steps taken to ease credit conditions in the region have yet to assuage the market given the severe underperformance seen in companies most reliant on debt to fund operations.

Financials carry by far the most net debt as a matter of operational structure and this is reflected in the factor ranks with banks carying an average rank of 8 (high net debt), followed by real estate with an average rank of 25, implying on a net basis that banks are more highly exposed to net debt than real estate by a factor of three (returns have however been calculated on a sector neutral basis). As negative to low interest rates squeeze margins at financials, sales volumes (increased lending) required to offset these declines is being squeezed by regulatory capital requirements. Banks ranking in the top 1% of firms according to the factor have seen significant price declines in the past 12 months - which have attracted short sellers.

The oldest surviving bank in the world, Italy's Banca Monte Dei Paschi Di Siena, is one such bank and has seen short sellers increase positions as shares plummeted over 75% in the past 12 months. Profits are under pressure at the bank as it battles bad loans and capital requirements, launching its fourth capital raise in just six years. 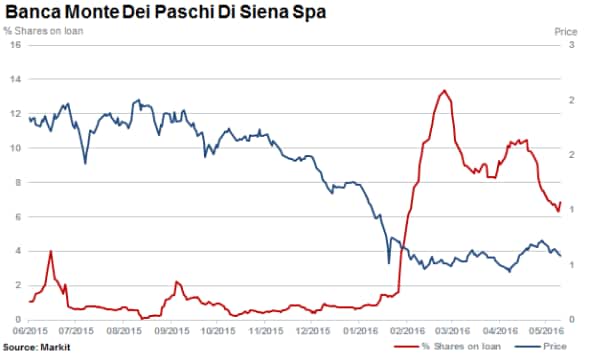 Joining the Italian bank in the top 1% of 'net debt firms', is Swiss banking group Credit Suisse. The bank has seen short sellers cover a third of positions as it reported better than expected results this week. Shares have tumbled over 40% in the past 12 months with the bank warning of declining sales and trading revenues as well as a host of job cuts and cost cutting measures to be implemented. 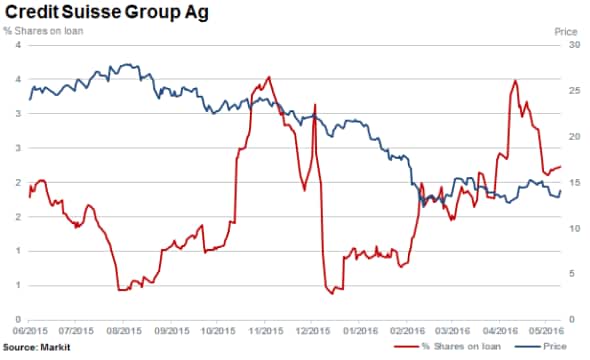 Other sectors featuring predominantly in the top 10% of names ranked according to the Net Debt Ratio factor include; real estate (also a structural characteristic), energy and materials firms. The latter have seen shares improve in recent months as respective markets recovered but shares are still significantly lower than prior to the collapse in energy and commodity markets seen over the past 18 months.

Also ranking in the top percentage of firms according to the Net Debt Ratio factor is Altice, a multinational telecommunications and media company. The firm has seen a threefold increase in shorting levels in the past six months with 3.3% of shares outstanding on loan currently. Altice recently announced the successful refinancing of $1.5bn of secured debt.