This year is set to see the return of cash dividends to Spanish bank investors, as the industry continues to recapitalise in the wake of the financial crisis.

Since the crisis the Spanish banking sector has transformed, following the investment of billions of euros in emergency national and EU backed capital injections provided in 2009 and 2012. The number of banks has declined from 50 to 15 with a number of the country's savings banks or Cajas de ahorros having been consolidated.

Overall, Spanish banks are above the 5.5% tier one capital ratio set by the ECB as all but one of the 15 banks, Liberbank, passed the ECB's stress tests. Liberbank has since raised €600m to meet the ECB's requirements.

Dividends in the spotlight

According to Markit Dividend Forecasting, the dependence on scrip dividends, which were increasingly relied on to conserve cash over the last five years, is set to taper off in the coming year. Scrip dividends have provided Spanish banks with flexibility and preserved precious capital resources in uncertain times for the sector. In 2017 it is forecast that the majority of dividends will once again be in the form of cash. By this time, the level of total aggregate Spanish dividends is expected to hit just 17% below the highs reached in 2008 of €8.8bn. 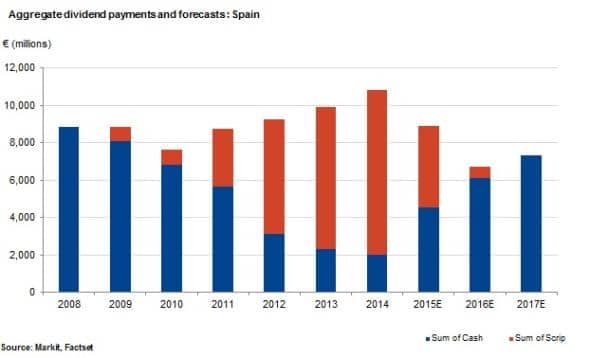 The largest of the Spanish banks, Banco Santander, was the first to initiate a scrip dividend and is set to lead the pack once again as the firm has announced its intention to refocus on cash dividend payments in January 2015. 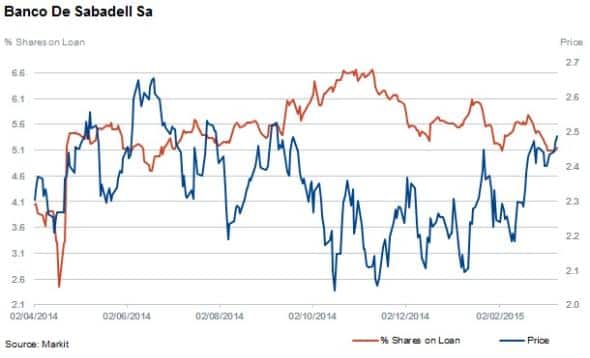 Banco de Sabadell is the exception to the rule, and is initiating a scrip programme for the first time this year. Sabadell, which also happens to be the most short sold Spanish Bank has seen short interest rise by a quarter over the last 12 months to reach 5.1%. This is five times the level of average short interest across the sector, which stands at 1.3%. Short sellers appear to have less appetite for Sabadell shares in the last few months however, as the number of shares out on loan has tapered off by 17% in the last four months. The activity could be related to the firm's bid for UK challenger bank TSB. 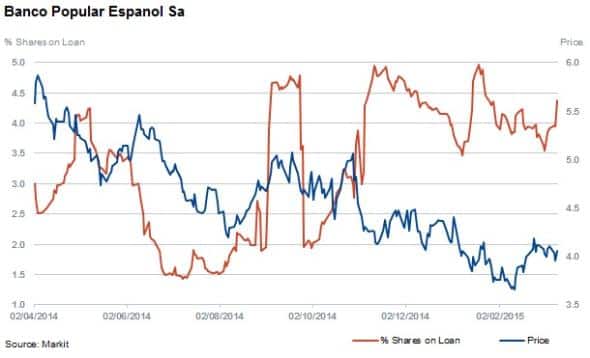 Banco Popular Espanol is the second most short sold bank with 4.4% of shares out on loan currently. The bank has witnessed its shares fall by 28% in the last 12 months. Banco Popular Espanol aims to deliver its first cash dividend to shareholders in 2015 in combination with a scrip payment, according to guidance given in the company's Q4 earnings call last year.

The US recently stepped up its anti-money-laundering practices. Are you clear on what the new rules mean for disclo… https://t.co/Get5Xu1xqh

Join our speakers, Rishi Kotecha and Chris Sparenberg, at this year's SuperTechnology North America event as they d… https://t.co/kogtIShxWB