The ice cold investor sentiment towards legacy European carriers is steadily thawing - short sellers have been aggressively covering their positions across many of the sector's heavily shorted names. Faced with relentless pressure from low-cost domestic upstarts and Middle Eastern carriers in the lucrative high end long haul space, Air France KLM and Deutsche Lufthansa have been some of the most consistently shorted stocks over the last few years; however, this status quo is rapidly changing as a sustained bout of covering has taken shorting activity for these two firms to levels not seen in several years.

German carrier Deutsche Lufthansa's shares have seen the greatest amount of short covering as short sellers have closed out 90% of their positions over the last six months. This covering, which took Lufthansa's short interest below the 1.5% of shares outstanding mark for the first time in over three years, is starting to look prescient as the airline's share have climbed over 80% higher year to date after the company reported greatly improved operating metrics. 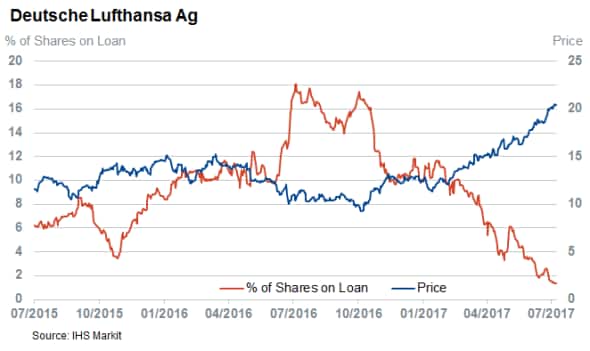 Covering in Air France-KLM, has been equally drastic as demand to borrow shares in the Anglo Dutch firm has shrank from 12% of shares outstanding in March to 1.5% as of latest count. The airline has also managed to turn its operational fortunes around: it's June traffic updateshowed a healthy increase in load factor across all major business lines. Investors warmed up to this good news as Air France shares cemented a 140% year to date rally, which is the highest level in over six years. 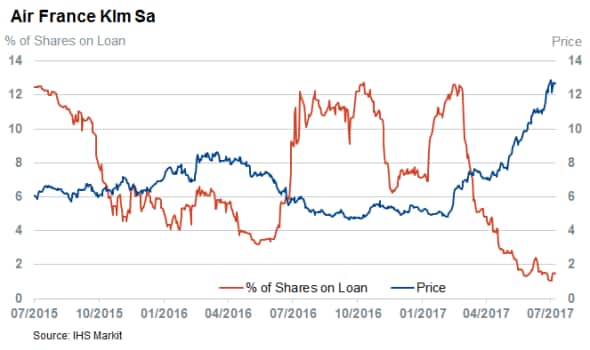 Time will tell whether or not both companies manage to continue their recent operational success, but it's clear that shorts are showing no appetite to call a top to the rally. 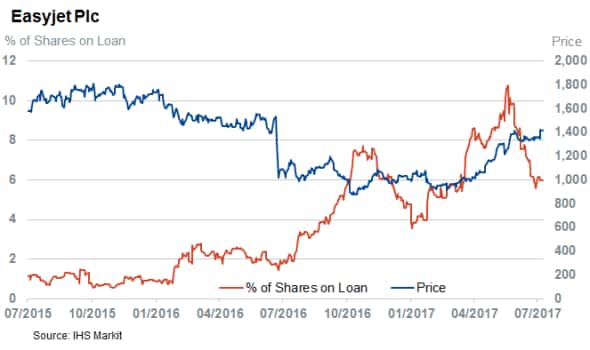 Short sellers had borrowed over 10% of the company's shares prior to its latest earnings update in May. These bets were initially vindicated when the firm announced a worse than expected loss due to the falling pound and the prospects of continued volatility over the possibility of a "hard" Brexit. This narrative has changed since the recent UK election which renewed the prospects of a "soft" Brexit. EasyJet shares have since recovered all the ground lost following last months' earnings update and they are now trading over 40% higher for the year. Short sellers, in turn, have covered over 40% of their positions in the last six weeks.

The one European airline still on short sellers' radars is Scandinavia upstart Norwegian Air Shuttle, which has 16% of its shares now out on loan. Norwegian's operating results have shown no resilience and its June trading update showed a marked fall in both load factor and yield. This indicates the company was flying emptier planes full of cheaper paying passengers. The company is due to announce its full earnings later this week, but investors have been forewarned that the news may not be positive, given Norwegian's longstanding CFO Frode Foss announced his sudden departure last week. This shock news delivered a badly needed win for airline shorts and sent Norwegian shares down 10% to the lowest level in two and a half years. 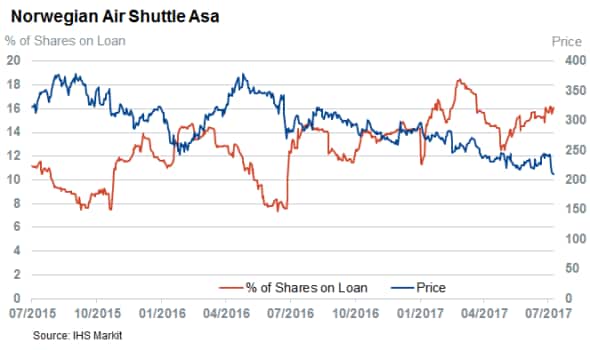 Fellow Scandinavian airline SAS, Norwegian's arch rival, has shown no such weakness in recent operating updates. Its shares, which are up by 40% year to date, have also seen significant short covering with demand to borrow down by a quarter over the last couple of months.