Despite lifting earnings estimates by more than any other sector heading into the first quarter results season, analyst and short seller sentiment is congruent on a continued unfavourable outlook for the energy sector.

European energy stocks are once again being viewed in a negative light relative to others even after analysts lift earnings estimates.

A turbulent market thus far this year has seen European stocks play their part in a global equities rally which started half way into the first quarter. At one point the Stoxx 600 was up by 14% from its lows but momentum has waned. Short sentiment and revised earnings forecasts highlight the changing sector expectations as companies prepare to report first quarter results. Despite posting the largest improvement in its sector ranking score according to Markit Research Signals' 3-M Revision in EPS Forecasts model* (earnings revisions), the energy sector remains the lowest ranked. Interestingly, the second highest most short sold sector, technology, ranks the highest in terms of the earnings revisions - indicating comparatively less consensus among shorts and analysts.

The energy sector remains 'unattractive' according to Markit's Sector Rotation model* and despite 6% covering remains the most shorted sector in European equity markets. Short sellers are largely in agreement with analysts in the energy sector with higher levels of average short interest correlating to weaker earnings revision rankings (above). While there appears to be higher short interest in some positively ranked names, more than 70% of energy companies place in the bottom half of earnings revisions in Europe.

One name which ranks highly according to earnings revisions but has high levels of short interest is oil refiner Saras, which currently has 6.1% of its shares outstanding on loan. The refiner represents about 15% of Italy's total oil refining capacity. Short interest at the refinery has spiked recently as oil prices recover, possibly reducing the benefit refiners get from the 'CRACK' spread that occurs during declining oil prices.

Ranking in the 10th decile according to earnings revisions (worst) of energy names and among the most shorted stocks in Europe is Core Laboratories with 19.8% of shares outstanding on loan. Core took part inequity and the oil price rally with shares rising 14% in the last three months, and short sellers trimming 13% of positions since the middle of February. 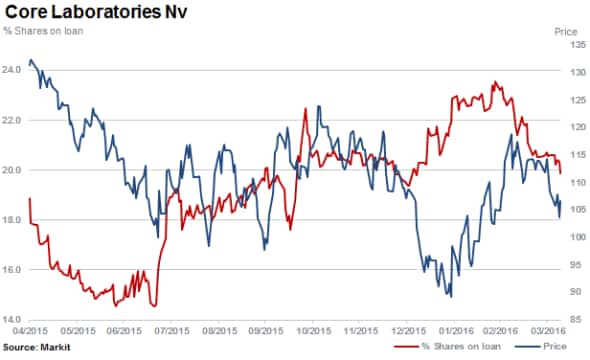 Core Laboratories provides services to global oil companies in evaluation oil reserves and the company's forecast is largely dependent on the outlook for the oil prices.

Besides the energy sector, technology and non-cyclical stocks in Europe have received the most positive upgrades to earnings estimates over the last month.

In terms of short sentiment levels, average short interest declined (green in the table above) in the majority of European sectors with only a handful seeing increases; financials, telecoms, healthcare and non-cyclicals.

*Defined as the change in the current mean consensus earnings estimate for fiscal year 1 less that of three months ago, deflated by its trading price. Markit Ranks this factor in descending order.