10 November 2015 Chris Williamson
Global economic growth ticked higher in October, with robust expansions in the US, UK, eurozone and Japan accompanied by an improved performance in China. However, whereas the recent data flow has resulted in the US Fed talking up the chance of rates rising by the year-end and Japan keeping policy on hold, a gloomy Bank of England downplayed the scope for a UK rate hike and the ECB raised the prospect of more stimulus. It remains to be seen whether the upturn in the PMI data for October is the start of a global growth revival or a blip in an easing trend, but Markit’s Global Business Outlook Survey points to the latter. The survey showed PMI-participating firms were the least optimistic about the next 12 months than at any time since 2009. The data flow over the next two months will therefore be vital in giving clarity on economic growth trends and whether policy will be tightened in the US and UK, and the prospect of further stimulus in China, the eurozone and Japan.

The JPMorgan Global PMI, compiled by Markit, regained some poise in October after slipping to a nine-month low in September, rising to 53.4. However, the survey merely signals a rate of worldwide GDP growth of just over 2% per annum.

Services continued to drive the upturn, as has been the case throughout much of the past two years, though an upturn in the goods-producing sector meant the divergence narrowed. The latter is especially welcome as it hints at a potential upturn in global trade flows, weakness in which has been a key factor behind this year’s slowdown in many countries. Global exports grew at the fastest rate for ten months, rising for the first time since June. 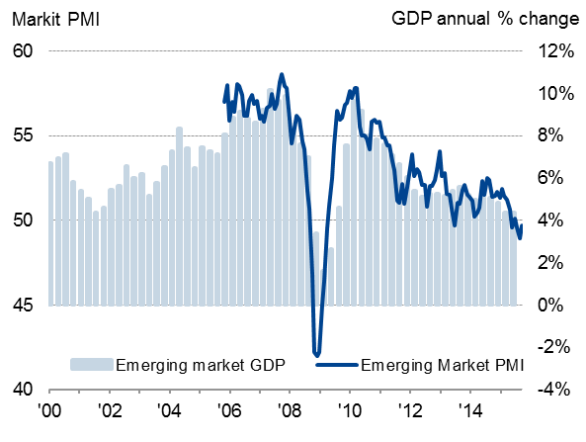 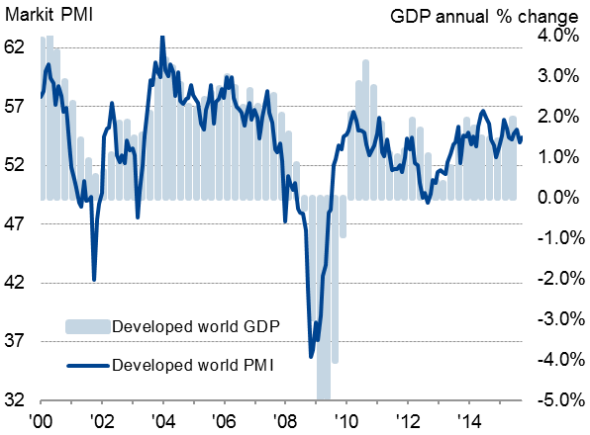 Growth slowed in the US in Q3 (down to 0.4%, or 1.5% annualised), as flagged ahead by Markit’s US PMI surveys, but domestic demand showed encouraging signs of resilience. The PMI surveys also signalled a continuation of the moderate growth trend at the start of the fourth quarter. An upturn in exports helped allay global growth worries and the pace of expansion in services remained robust. Non-farm payrolls also impressed and wage growth accelerated, fuelling expectations of the Fed hiking interest rates in December.

Expectations had also risen of the Bank of England hiking interest rates around the turn of the year, fuelled further by the three PMI surveys collectively pointing to solid 0.6% GDP growth at the start of Q4.

However, the Bank of England, having seen the rate of UK economic growth slow to 0.5% in Q3 and worried about the impact of the global slowdown, downgraded its forecasts and indicated that interest rates are likely to remain on hold until 2017. However, with growth picking up in October and the labour market strengthening, an earlier hike cannot be ruled out.

Emerging markets continued to act as a brake on global growth in October, albeit with the drag easing. At 49.7, the Emerging Market PMI remained below the neutral 50.0 level for the fourth time in the past five months. Although the data point to a pick-up from what has been the worst performance since 2009, the emerging market index is still signalling GDP growth of less than 4%.

Of the nine countries which reported a decline of their manufacturing economies in October, all were emerging markets bar Greece and Canada, the latter suffering in its role as a key supplier of raw materials to emerging market producers.

Perhaps most importantly, China remained mired in weakness, contributing to ongoing malaise across much of Asia. At 49.9, the ‘all-sector’ Caixin (Markit-compiled) PMI for China clearly indicates a risk that GDP growth will slow further from the 6.9% pace seen in Q3. However, the manufacturing downturn eased amid better export demand, the rate of decline having been the most severe for six-and-a-half years in September. Growth meanwhile picked up slightly in the service sector, which once again provided the main thrust to the economy.

While Asia ex-Japan remained mired in a manufacturing downturn that continued to act as a major brake on global economic growth (despite the rate of contraction easing), Japan’s goods producers reported renewed signs of life as exports picked up. Together with an upturn in services growth, the Nikkei PMI survey indicates that Japan has enjoyed a growth upturn in Q3 which has gathered pace at the start of Q4. The stronger survey data support the Bank of Japan’s recent decision to keep policy on hold rather than inject more stimulus.

The Eurozone PMI edged higher in October to signal a 0.4% rate of GDP growth at the start of Q4, matching the pace indicated for Q3. Spain continued to lead the upturn, followed by Germany and Italy, with France once again trailing but nevertheless showing renewed signs of life. However, with inflation remaining absent, the ECB talked up the possibility of further QE by the end of the year. 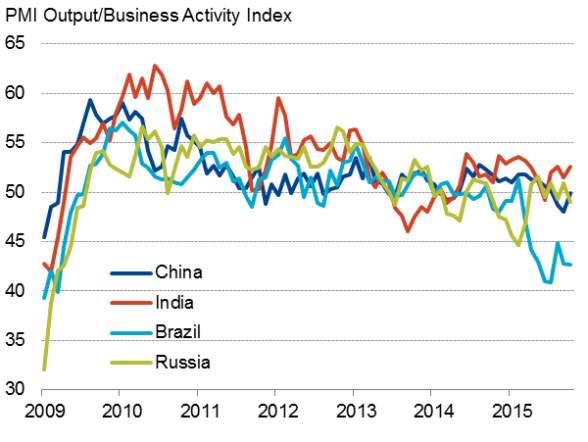