The UK construction sector suffered a 3.9% slump in output in August, according to data from the Office for National Statistics. Output was down 0.3% on a year ago, the first such annual fall since May of last year. We suspect, however, that this is a wholly inaccurate representation of the sector's health, and that construction in fact continues to boom.

Striking revisions to back data

We question the value of the official construction data due to the scale of revisions that occur after data are first released. The signals about the health of the sector and the economy as a whole can be utterly misleading as a result. Last month, for example, the ONS reported that construction output had been flat in July, continuing a period of stagnation seen during the second quarter. However, the ONS now estimates that output rose by an impressive 1.9% in July after a substantial gain of 0.7% in the second quarter.

Buoyant survey data suggest that even the upwardly revised official data for prior months have understated the true pace of expansion so far this year, and indicate that growth accelerated further in the third quarter. The Markit/CIPS Construction PMI showed the sector growing at its fastest rate for 17 years in the three months to September.

This strong upturn is also by no means purely a symptom of a booming housing market, and instead businesses are investing strongly in property development as the domestic economic outlook remains more favourable than at any time since the financial crisis. Development of offices, retail and industrial property are all growing rapidly according to the PMI, a trend corroborated by signs of commercial property development picking up again in September after a summer lull, according to survey data also published today by Savills and Markit.

The strong performance of the construction sector indicated by the surveys adds to evidence that the economy continued to grow at an encouragingly robust pace in the third quarter. We expect GDP to have risen by 0.8%, given the data currently available for the period, though we ignore the latest figure for construction from the ONS in this estimate, as the chances are that it will be revised to show a completely different trend next month. The first estimate of GDP could therefore easily come in lower than 0.8%, perhaps 0.7% of even 0.6%, depending on what assumptions the ONS use for September. 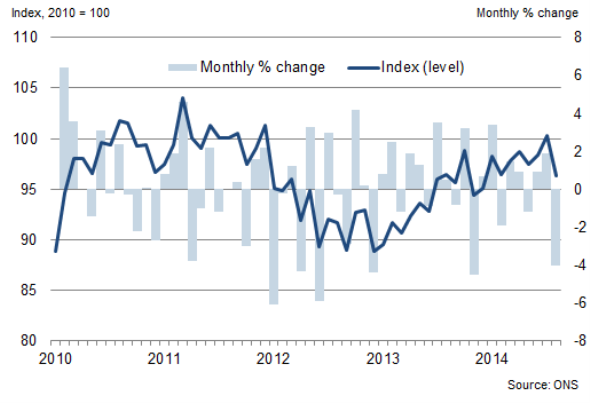 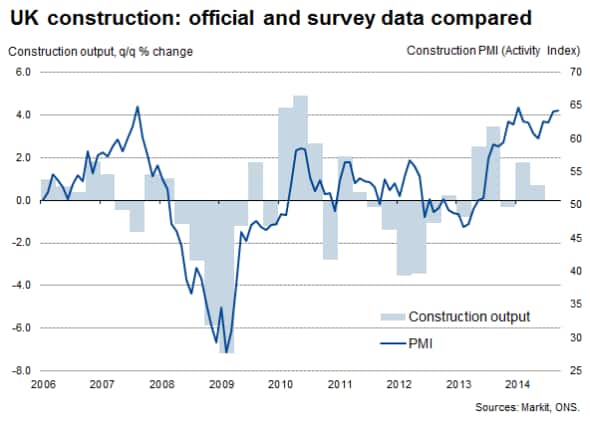