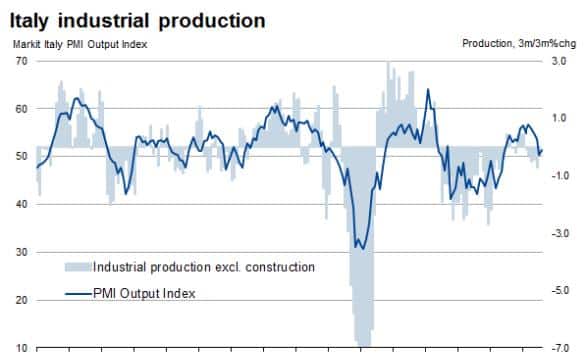 Industrial production in Italy rose by 0.3% in August, but the increase only partially made up for a steep decline in July and leaves the underlying trend firmly negative, in line with a recent deterioration in survey data.

The official data therefore add to signs that growth slowed in both Italy and the wider eurozone over the summer months, raising worries about the region sliding back into recession.

Subdued rebound
Data from ISTAT showed industrial production rising 0.3% in a bounce-back from a 1.0% decline in July. However, the improvement still left production running 0.6% lower in the third quarter so far compared to the second quarter. That leaves output on course for a second consecutive quarterly decline, following a 0.4% drop in the second quarter (and a flat first quarter).
Despite this rise in August, Italian industrial production is some 25.6% lower than its pre-recession peak, highlighting the severe damage done to the county's productive capacity by the 2008 financial meltdown and ensuing debt crisis.

Deepening recession
The industrial downturn therefore points to a deepening of Italy's third recession since the financial crisis struck. GDP fell 0.1% in the first quarter and by 0.2% in the three months to June. These weak industrial production numbers, alongside a downturn in the PMI surveys, suggest GDP may have also fallen again in the third quarter.
It's worth noting that the PMI had been more buoyant than the official GDP and industrial production data earlier in the year, notably so in the second quarter. This is likely to have been due to the official data being affected by an inadequacy of seasonal adjustment processes to fully account for an unusually high number of holidays in May and June. However, the concern is that the PMI is heading firmly down again from a recent peak seen in June. The PMI covering both manufacturing and services signalled a contraction for a second successive month in September, albeit only marginal, dropping to its lowest since last November.
A deepening recession in Italy comes at a time when growth also appears to be weakening in other eurozone countries, applying further pressure on policymakers to do more to stimulate the economy.