US financials continue to outperform non-financials

US financials have proven to be the bright spot in the US corporate bond market so far this year as their respective credit position diverges.

In the US corporate bond market, financials was the best performing sector in August. Last month's volatility in financial markets caused credit spreads to widen, yet financials even outperformed defensive sectors such as healthcare and utilities, according to Markit's iBoxx indices. Banks in particular stood out among financials, returning 46bps more than the broader dollar corporate bond market. 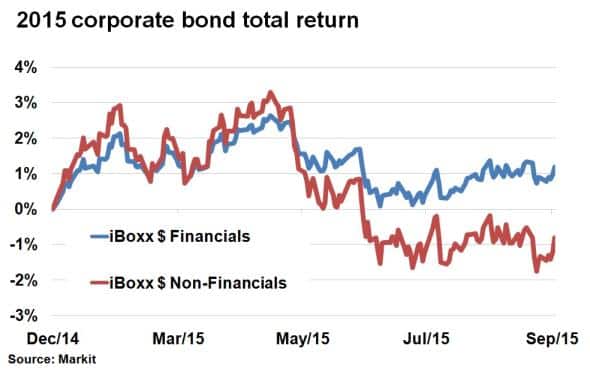 The start of 2015 saw headwinds for financials. Heavy litigation costs and reduced trading revenues saw CDS spreads spike. Stress testing of the banks also caused frayed nerves among market participants. Non-financials, on the other hand, enjoyed the transitory effects of European QE, which reduced credit risk more broadly. Mid-April then saw a shift towards a more risk off environment as once again, matters in Europe and the Greek debt crisis unsettled investors. As primary market issuance seized up, financials held up better than non-financials over the summer. This trend was further exacerbated over the last few months due to financials' lower direct exposure to commodities and Chinese demand compared to non-financials. 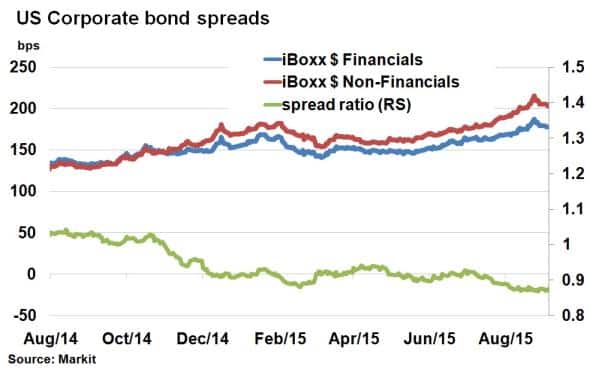 Further compression of this ratio depends on the outlook for both sectors. Uncertainty around Chinese and emerging market demand remains a concern for non-financials with foreign exposure, while corporates' exposed to oil and commodities remain wary about further downside risk.

Conversely, US financials are generally less exposed to global macro concerns (seen by the recent spread outperformance) and continue to strengthen their balance sheets while being monitored by a strong regulatory backdrop. The Markit iBoxx $ Financials index spread over treasuries currently stands at 177bps, approximately 50bps wider than in mid-2014; suggesting there is room for potential further tightening.

The fundamental credit strengthening of the US financial sector is evident by looking at the spread relationship between the highest quality financial debt and the lowest quality (subordinated). The spread ratio between the Markit iBoxx $ Financials Senior and iBoxx $ Financials Subordinated has been in steadily decline since April, and is now at its lowest level since 2011.

Most interestingly, spreads of treasuries have been widening since April which suggests technical rather than fundamental factors. With the US economy improving, this can only bode well for the US financial sector.