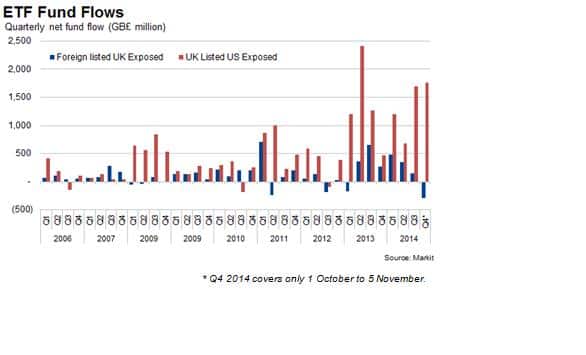 Investors are pulling money out of the UK at a record rate as the economic picture clouds over, while UK money is meanwhile moving into brighter looking US investment, according to Exchange Traded Fund data compiled by Markit.

A loss of appetite for UK investments has occurred as the economic data flow has disappointed. News that the UK trade deficit widened in the third quarter adds to a growing list of downbeat statistics published in recent weeks. Manufacturing has clearly moved down a gear since earlier in the year, and PMI data suggest that the overall pace of economic growth hit a 16-month low in October. GDP looks set to rise by 0.5% in the final quarter of the year, down from 0.7% in the third quarter, with the pace of growth looking more likely to ease further than accelerate, given disappointing inflows of new work to businesses.

Part of the problem is the UK's proximity to the Eurozone, and the malaise of the single currency area is clearly having an impact on the UK's economic performance and outlook. Over the third quarter, the UK recorded its widest ever trade deficit with Germany, its largest trading partner, due to falling exports.

The Bank of England's Monetary Policy Committee once again left interest rates at their record low at their November meeting, and expectations of when UK interest rates will start rising have been pared back alongside the disappointing flow of economic data. During the growth surge seen in the first half of the year, expectations were growing that the first hike might even take place in late 2014, albeit with a consensus growing for early 2015. Markets are now looking at mid-2015 as the most likely date for a rate rise.

In contrast, worries of a slowdown in the US - a major catalyst of which was a drop in September's retail sales - have been largely brushed aside. Recent GDP data confirmed the robust growth signalled by the business surveys, showing the economy expanding at an annualised rate of 3.5% in the third quarter. Unemployment has slumped to 5.9% and non-farm payrolls continue to show historically robust rates of hiring consistent with further falls in the jobless rate.

The Federal Reserve made its last asset purchases under its third quantitative easing programme in October, and expectations are growing that the first US rate rise could take place in early 2015 if economic conditions continue to improve at the rate we have seen in recent months.

US and UK stock markets 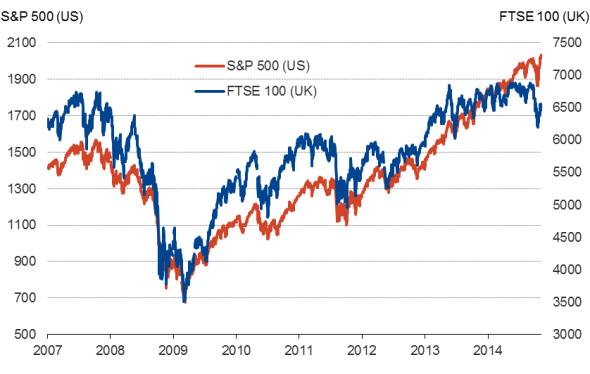 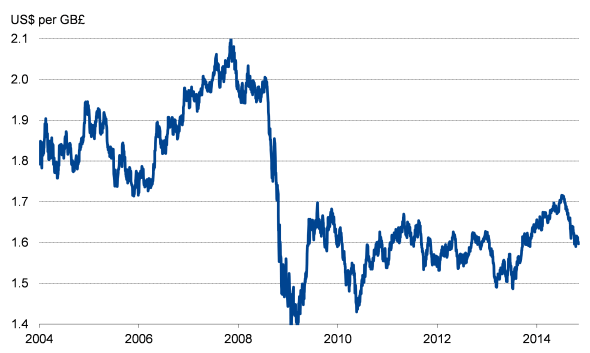 While sterling and UK equities have been steadily knocked by the economic data flow in recent weeks, the US markets have improved. The pound has dropped 7% against the US dollar since July to hit a one-year low and the FTE 100 is down 5% compared to its peak seen in early September. In contrast, US equities have continued to rally, with the S&P500 hitting record highs in recent sessions.

Investors have in fact exited sterling-based ETFs to a record extent in recent weeks. Non UK-based ETFs with an exposure to the UK have seen "287m net outflows so far in the fourth quarter (including data up to 5th November), which is already the largest quarterly outflow recorded since data were first available at the start of 2006. This is the first net outflow seen since early 2013, when fears were growing that the UK was sliding into a triple-dip recession.

UK investors are meanwhile moving their money into the US. A net outflow of "1.757bn from UK-listed ETFs with an exposure to the US has so far been recorded in the fourth quarter. Although only covering the first five weeks of the quarter, the fourth quarter outflow seen so far already beats the "1.691bn outflow seen in the third quarter, which was itself the second largest on record.

In some respects, however, the bullishness shown towards US investments may be somewhat overplayed. After all, Markit's US PMIs showed US economic growth slowing to a six-month low in October, somewhat mirroring the slowdown evident in the UK surveys.

If the US slowdown intensifies, and the US dollar depreciates as interest rate expectations wane, US dollar-denominated investments could also lose some of their appeal. 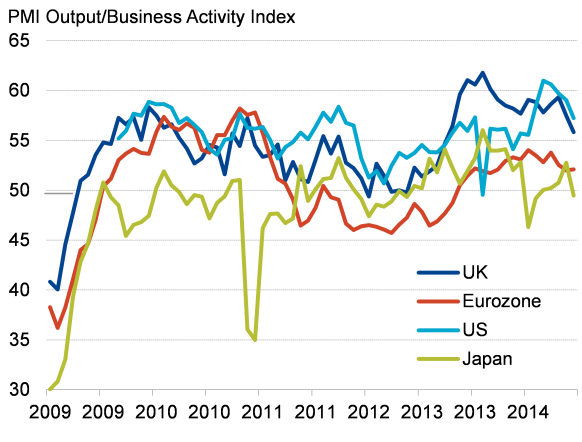