German industrial production fell sharply in August and factory orders declined substantially, suggesting that the goods-producing sector is in the midst of a slowdown.

This weakening of the industrial sector is likely to act as a major drag on third quarter GDP, which now looks set to rise by just 0.2%. Although this means Germany may skirt recession after GDP fell 0.2% in the second quarter, a further loss of momentum signalled by the business surveys in September suggests a renewed downturn in the fourth quarter should not be ruled out.

Industrial production fell 4.0% in August, according to the Federal Statistical Office (Destatis). Economists polled by Reuters had expected a 1.5% decline. The drop in industrial production was the sharpest since 2009 and follows a revised 1.6% increase in July (previously reported as +1.9%).

Destatis reported that capital goods manufacturers saw the steepest drop, with production down some 8.8%. Intermediate goods output meanwhile fell 1.9% and the production of consumer goods decreased 0.4%. Energy production was up by 0.3% on the month, but construction was down 2.0%.

With the exclusion of construction and energy, manufacturing output was down 4.7%, the largest monthly decline in well over five years.

The production data followed official data released on Monday which had shown factory orders dropping 5.7% in August, having increased 4.9% (revised up from an initial 4.6% rise) in July. The August decline was the steepest since the height of the financial crisis in 2009. Domestic orders fell 2.0%, while new export work declined 8.4%, one of the largest drops in the series' history. Factory orders now have to increase by close to 4% in September for the third quarter to be at least flat on Q2, something which seems unlikely given that PMI survey data showed manufacturing orders fell for the first time in 15 months in September.

Manufacturing production and the PMI 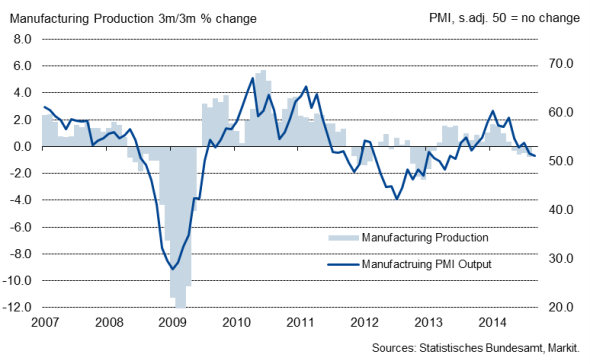 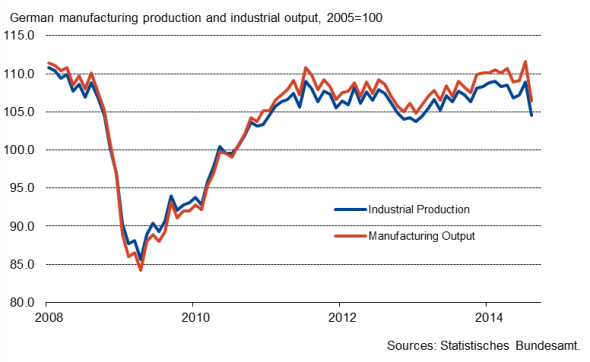 Factory orders and the PMI 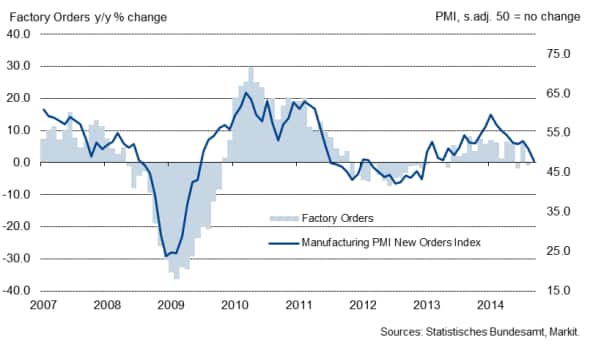 Official data and PMI point to loss of momentum in manufacturing

While the industry data in particular have been difficult to read over the summer as the removal of seasonality has proven especially difficult due to the shifting nature of the regional school holidays, there can be little doubt that Germany's mighty industrial sector (which accounts for more than 20% of the economy) has lost considerable momentum since the start of the year. The manufacturing PMI is currently tracking around seven points lower than its January reading, slipping into slight contraction territory in September as Russian sanctions and geopolitical uncertainties weighed on performance.

Worrying picture of the health of the German economy

Although at the start of the week we were looking for Q3 GDP growth of around 0.4% q/q, this week's official data flow so far means we have downgraded our forecast to just 0.2% q/q. Moreover, any growth is likely to be largely driven by the services economy, data for which are considerably sparser, adding uncertainty to the forecast.

The picture should become a little clearer with the September industry statistics which are due to be released in early November just ahead of the preliminary estimates of third quarter GDP.

German economic growth and the PMI 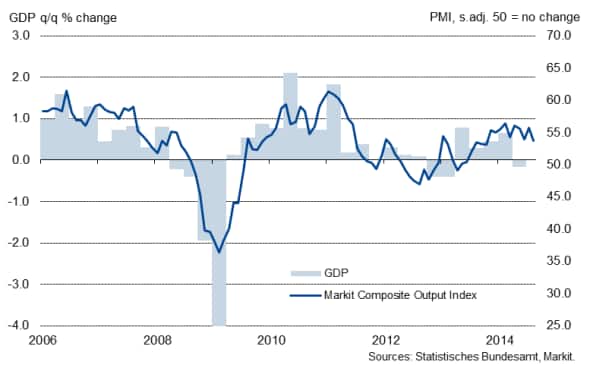 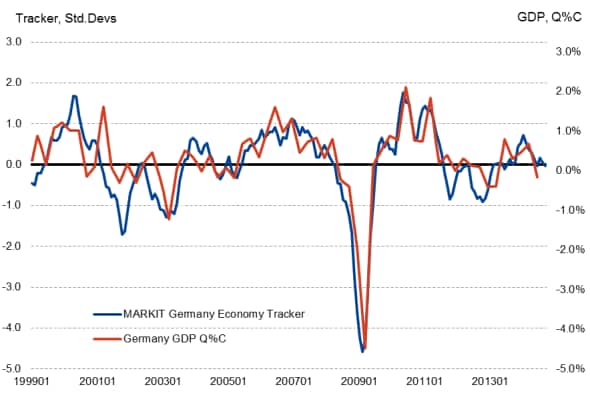