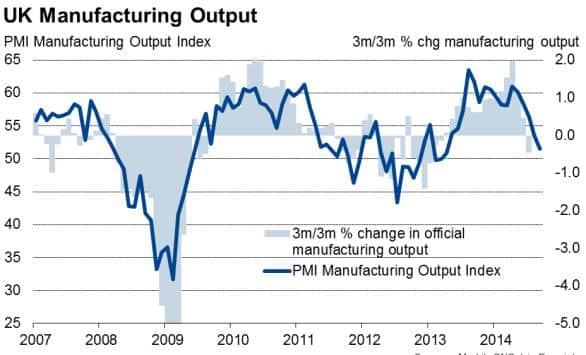 The growth surge enjoyed by UK manufacturing over the past year is running out of steam. Factory output growth has slowed sharply since earlier in the year, as producers suffer from the twin headwinds of weak economic growth in key exports markets and an appreciating exchange rate.

Although only representing around 10% of economic activity, the deteriorating picture of the manufacturing sector and the associated weakness of the eurozone economy will no doubt cause any Bank of England policymakers to take a pause for thought before considering higher interest rates. Both the weakness of the manufacturing sector and worries about the eurozone have been cited recently by the Bank as reasons to hold off on raising interest rates, and today's data adds justification to such caution.

Official data from the Office for National Statistics showed factory output up just 0.1% in August. The wider measure of industrial production, which includes the energy sector, was unchanged.

The disappointing reading is not a one-off. Manufacturing output in the three months to August was flat on the prior three month period. Back in April, this three-month growth rate had hit 1.9%.

Although the ONS in part blamed August's weakness on longer than usual summer shutdowns for maintenance in the auto sector, there is clearly a slowing underlying trend evident in the goods-producing sector.

The official data follow survey data showing a further weakening evident in September. The Markit/CIPS Manufacturing PMI fell to a 17-month low, dragged down by a near-stagnation of order books.

Key to manufacturers' problems are exports. Slumping demand in the UK's main export market, the eurozone, is being exacerbated by sterling's appreciation, which has raised the cost of UK goods in overseas markets.

The ongoing plight of the eurozone, and the drag the region is exerting on UK exporters, is brought sharply into focus by news of German industrial production falling some 4.0% in August, its steepest drop since the height of the financial crisis in 2009.

Sterling has meanwhile risen almost 6.5% against the euro over the past year, up nearly 1% in September alone compared to August.

The appreciation of sterling is a further setback for hopes of a rebalancing of the economy from domestic consumption towards export-led manufacturing. The goods-producing sector remains some 4.4% smaller than its pre-crisis peak seen in the first quarter of 2008 while the overall economy is 2.7% larger.

Production since the crisis 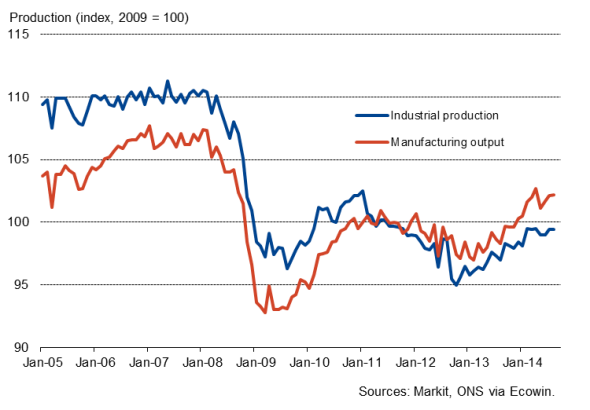 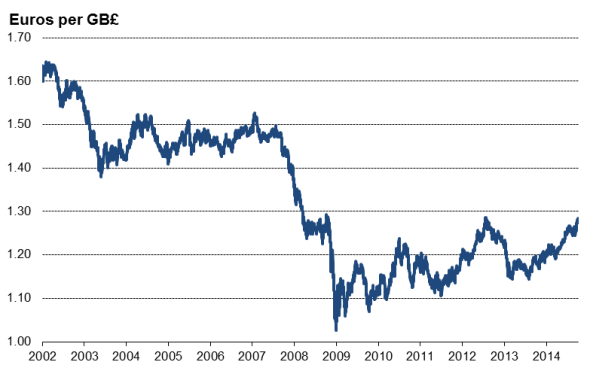