German goods producers suffered their largest drop in industrial production for nearly two years in July. Destatis reported a 1.5% drop in output, following an upwardly revised 1.1% increase in June (previously reported as a 0.8% rise). Analysts expected a marginal rise of 0.1%. The measure for manufacturing only, which strips out construction and energy, showed an even more severe fall of 2.3%.

The industrial production data follow weaker-than-expected factory orders figures, adding to signs that the eurozone's largest economy may be set for a growth slowdown.

Weakness could be caused by working days effect

The decline means that industrial production would have to expand by more than 1% in August and September for the sector to eke out any growth over the third quarter as a whole.

A robust rebound is in fact a strong possibility, as it is likely that the weakness in the official measure for industry was at least in part linked to calendar factors. Note that August had 23 working days, an additional two days compared to July. Calendar-caused volatility in the data is not unusual. In July 2014 (23 working days) for example, industrial production rose 1.1% before falling 2.5% in August (21 working days) and then rising 1.8% in September (22 working days).

Encouragement can also be sought from business survey data such as the PMI, which have been signalling steady, although unspectacular growth in recent quarters. Germany's Composite PMI (which measures the combined output of the manufacturing and service sectors) is still consistent with overall economic growth, despite falling to a 15-month low in August. The index was dragged down by a struggling service sector and adds to worries that GDP growth will fail to accelerate from the moderate 0.4% pace seen in the second quarter.

The sharp slowdown in the service sector contrasts with further solid growth at manufacturers, which points to ongoing growth of German industry in the third quarter. The survey data are often less volatile than official production figures and provide a good indication of the underlying health of German manufacturing.

Moreover, data from VDA industry association showed that domestic registrations of new cars in Germany increased 8% on a year ago in August, following a 4% decline in July. This is stronger than the trend observed for 2016 so far (6%), and suggests that the German car market remains in good shape despite orders being restrained by factors such as the Volkswagen (VW) scandal and Brexit uncertainty.

Flash PMI data for September are released on 23rd September and will provide important information on economic trends in Germany. 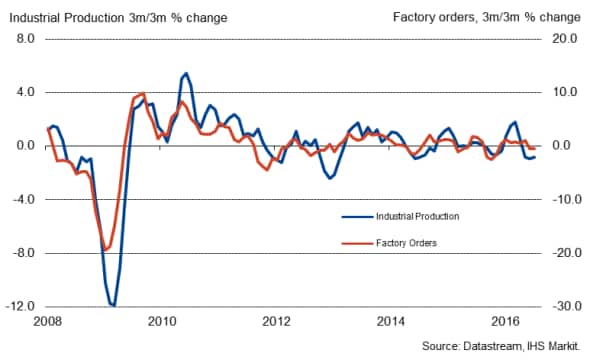