UK manufacturers suffered their largest drop in output for a year in July as 'Brexit' worries hit production. Output fell for a third successive month according to the Office for National Statistics, down 0.9% after a 0.2% decline in June and 0.7% drop in May. 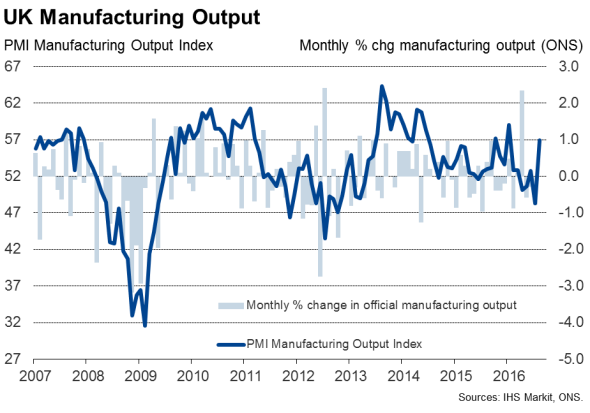 The wider measure of industrial production was up 0.1% after a flat June, boosted by higher oil and gas output.

The data confirm indications from business surveys that the vote to leave the EU on 23rd June had an immediate damaging impact on the economy. However, while PMI data had also indicated a sharp fall in factory output in July, the surveys have since shown a strong rebound in August as the initial shock of the EU referendum passed. The overall picture is one of fairly flat manufacturing output so far in the third quarter, and a broadly stagnant economy as a whole.

Moreover, the manufacturing survey also highlights how producers are already enjoying resurgent export growth as the weak pound means UK-produced goods are cheaper to overseas customers. The survey shows exports rising at the fastest rate for over two years in August, indicating how the exchange rate should help provide a support to production levels and the wider economy in coming months.

The surveys therefore suggest that we should not get too concerned about what looks to have been a knee-jerk shock to the manufacturing economy in July, from which the sector has since rebounded. However, it's also wrong to be complacent. There remains widespread concern among manufacturers about the economic outlook and access to the EU markets in particular, as well as a potential squeeze on profit margins due to higher imported raw material costs. The future health of the manufacturing sector remains very uncertain. The overall picture of a flat economy in the third quarter so far is also sombre compared to the robust growth seen prior to the referendum.