The following is an extract from IHS Markit's monthly economic overview. For the full report please click on the link at the bottom of the article.

The global economy enjoyed further steady growth in June, according to the latest PMI data. The JPMorgan PMI", compiled by IHS Markit, edged down from 53.8 in May to 53.7 in June, but still completed a solid Q2. At 53.7, the Q2 average was unchanged on that seen in Q1, which had in turn been the best performance for two years. The surveys have therefore been signalling global GDP growth of approximately 2.5% per annum over the first half of 2017. 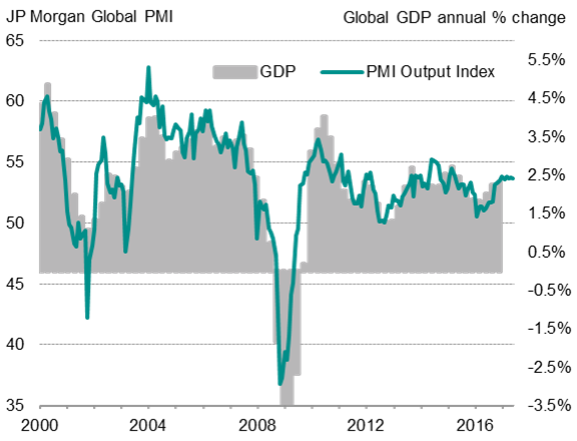 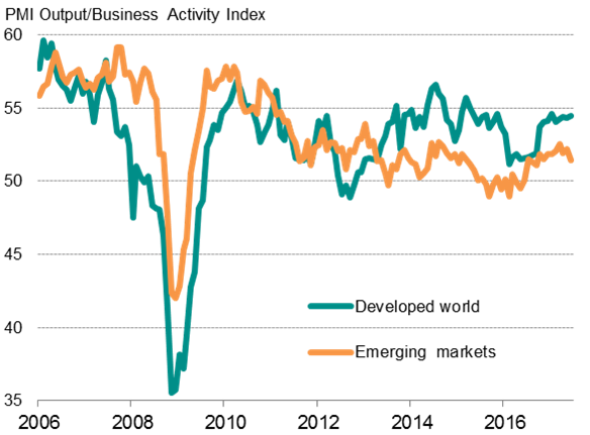 Source: IHS Markit.
* PMI shown above is a GDP weighted average of the survey output indices

Developed world growth was broad-based but was once again led by the eurozone. Although the Eurozone PMI signalled slightly softer growth in June, the region outperformed its peers for the fifth straight month with the surveys signalling Q2 growth at a six-year high. Rates of expansion also slipped in the UK and Japan, but in both cases rounded off better quarters than the first three months of the year. In contrast, US growth accelerated slightly in June, though the Q2 average remained below Q1.

Of the four largest emerging markets, only India saw business activity grow at an increased rate in June. Growth slowed in both China and Russia, though the latter recorded the fastest growth of the BRIC economies. Brazil meanwhile slipped back into decline after two months of marginal expansion.