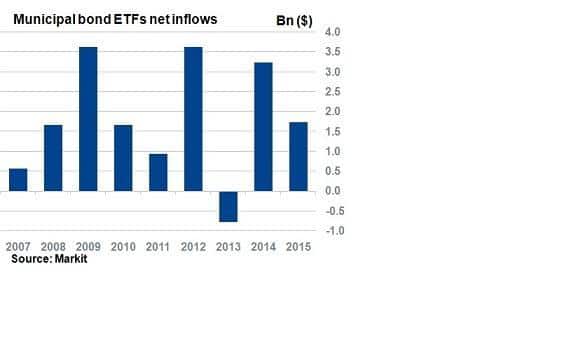 The US bond market can be split up into two categories: the taxable and the tax-exempt, namely the municipal bond market. Issued by state and local governments to fund public projects, "munis" make up a sizeable chunk of the US bond market with $3.7trn in principal outstanding.

Primary market issuance has been buoyant with the first four months this year showing a 46% increase year on year (yoy). This sector has been popular as it provides federal tax exemption and historically has had low levels of default, especially on general obligation bonds.

Over the last five years municipal bond ETFs have doubled their AUM to $16.8bn. After fleeing in 2013, investors have returned to the market, which saw net inflows in 2014. The appeal of muni exposure has continued, as 2015 so far has seem net inflows of over $1.5bn. Inflows have been particularly strong of late, with the last two quarters generating inflows of over $1.2bn; the largest net inflows on record.

The resurgence into muni ETFs can be attributed to a number of factors. Firstly, 2013 was a bad year with both Detroit and California filing for bankruptcy protection on their muni bonds; this sparked a flight away from the asset class which was reflected in the ETF fund flows.

But local government finances have recently improved, prompting a bounce back in investor appetite. In the current low yield environment, muni ETFs have been a good alternative to conventional bonds as they provide a tax efficient way to gain exposure to the relative high yields offered over other guaranteed securities and US treasuries. 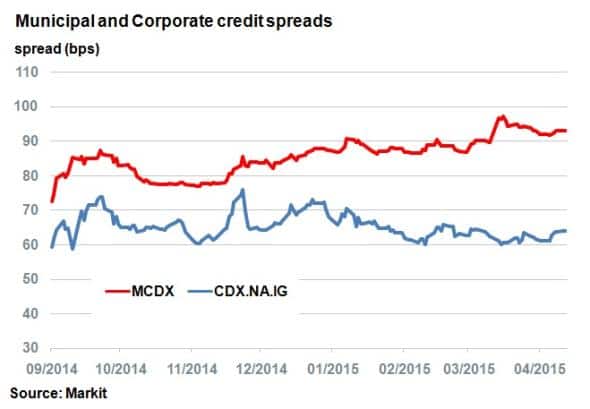 But while ETF net inflows have been robust this year, the same cannot be said about credit risk. The basis between MCDX, a credit index referencing municipal single name CDS, and the CDX.NA.IG, made up of investment grade corporates credit spreads, has diverged from 18bps to 29bps year to date.

The divergence highlights the risks involved with investing in munis. Fiscal management among US states remains precarious, as exemplified by Puerto Rico's recent troubles. State pension reform and economic policy uncertainty is also cause for concern for bondholders. Add to the mix an unclear path for underlying interest rates and risks become apparent.

One of the major causes for concern for muni bond holders has been the situation in Puerto Rico, a US territory in the Caribbean. The island has run up debts and is finding it difficult to meet financial commitments, denting its creditworthiness with S&P having recently downgraded it to CCC+ from B. 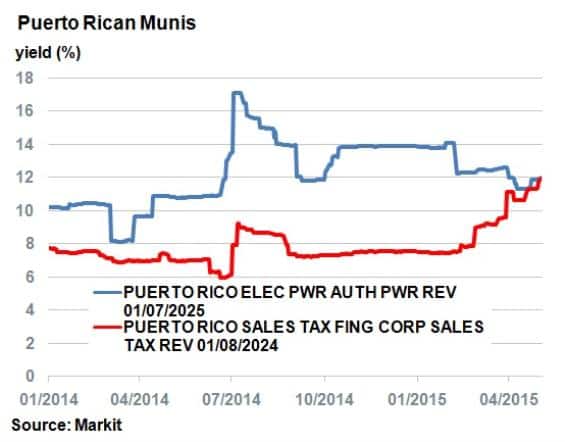 Puerto Rico's sales tax revenue bonds have in particular been under pressure after the government rejected a bill to reform VAT, which would have helped plug the budget deficit. The state's sales tax revenue bond maturing in 2024 has moved from yielding 8% to nearly 12% in the last two months, according to Markit's municipal bond pricing service. 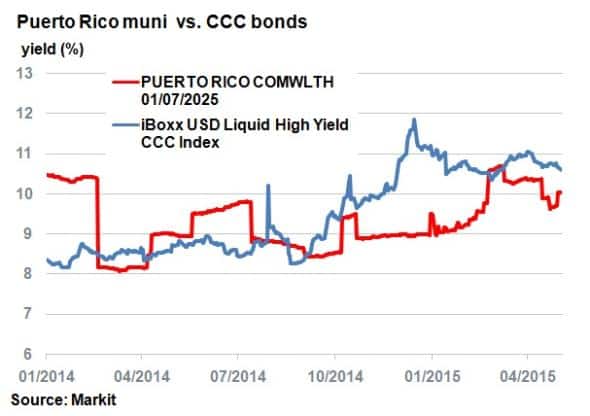 Despite the risks, prominent bond investor Jeff Gundlach recommended buying Puerto Rican municipal bonds last week on the basis that they provide a good risk adjusted return. Gundlach believes that much of the risk has already been priced in and therefore considers the yields attractive.

The relative appeal of the Puerto Rican munis can be seen by comparing equivalent CCC corporate bonds using the iBoxx USD Liquid High Yield CCC Index and the Puerto Rican 10-yr general obligation bond. Both yield around 10%, but the Puerto Rican bond is exempt from federal taxes, giving it a higher net return.