Global economic growth regained some momentum in March, according to PMI survey data, rounding off the best quarter for two years.

The JPMorgan Global PMI", compiled by Markit from its various national surveys, rose from February's three-month low of 53.4 to reach 53.8 in March - just a shade lower than January's 22-month high.

The March upturn takes the average PMI reading for the first three months of 2017 up to the highest since the opening quarter of 2015. Historical comparisons with official GDP data indicate that the PMI is consistent with the global economy expanding at an annual rate of just under 2.5% in the first quarter .

A key development this year has been the revival of emerging market growth. At 52.6, the Emerging Market PMI reached a 31-month high in March and indicates that developing world growth has improved significantly since the near-stagnation signalled this time last year.

Growth has also picked up in the developed world. Although still below January's 14-month high, the PMI for the rich-world economies rose to 54.1 in March, completing the best quarter since the third quarter of 2015.

The upturn was broad-based with similar solid rates of expansion seen in both manufacturing and services. Both sectors have seen growth pick up substantially in emerging and developed markets alike compared to this time last year. 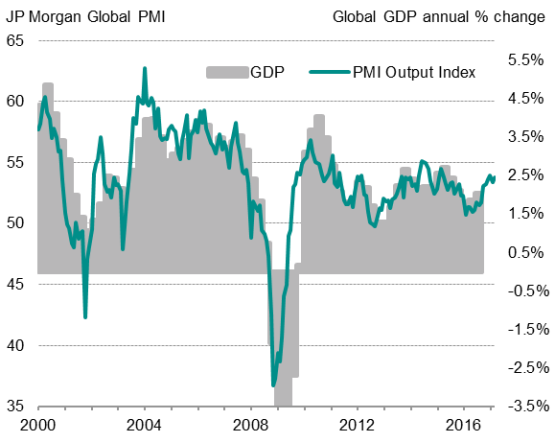 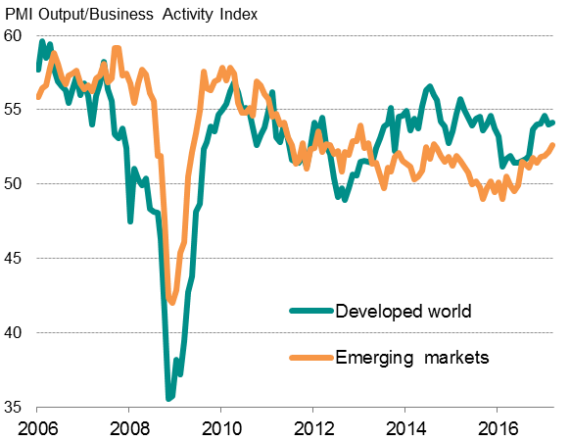 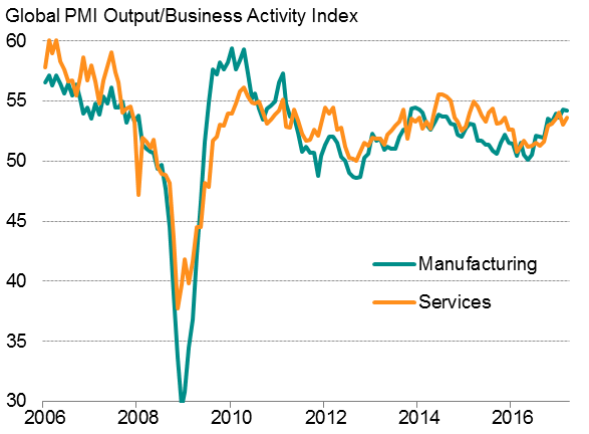 For the second successive month, the eurozone recorded the fastest growth of the four largest developed economies, enjoying its strongest expansion for six years, and broadly consistent with GDP growth accelerating to 0.6%. Jobs growth hit the highest for nearly a decade, underscoring the strength of the upturn and suggesting companies continued to shrug off political uncertainty. The weaker euro meanwhile continued to help boost growth.

In a month in which the UK served notice to leave the EU, Brexit worries continued to be widely cited and contributed to another month of relatively modest growth. Although up on February, the March PMI surveys failed to change the picture of an economy growing by 0.4% in the first quarter, down from 0.7% at the end of last year.

Slower growth in the UK was most evident in consumer sectors, suggesting that higher prices continued to dampen spending. Growth of UK firms' input costs continued to rise at a markedly faster rate than its peers, albeit with the rate of increase slowing from recent highs.

Some froth meanwhile came off US growth, with the IHS Markit PMI surveys indicating the weakest expansion for six months. The surveys point to the economy growing at an annualised rate of 1.7%, down from 1.9% at the end of last year. Exporters continued to struggle with the strong dollar and domestic demand showed tentative signs of softening.

Hiring slowed in both the US and UK, illustrating the waning of growth compared to late 2016.

Japan continued to lag behind the other major developed economies, but nevertheless saw growth accelerate to a 19-month high, according to the Nikkei PMI surveys, buoyed by faster service sector activity as well as an export-related boost to manufacturing.

Growth trends were again more varied in the major emerging markets. Russia continued to record the fastest rate of expansion of the four BRIC nations, with similar growth rates seen in India and China. However, while the Nikkei India PMI saw a further recovery of activity following the disruptions caused by the withdrawal of high-denomination bank notes, the Caixin PMI surveys showed the pace slowed in China, due mainly to weaker services activity growth.

Brazil meanwhile remained in contraction, but an easing in the rate of decline suggests its' worst downturn on record is at least drawing to a close.