UK labour market data will play a key role in determining if policymakers need to take an increasingly dovish stance in coming months, and updated inflation data for the US, China and the euro area will offer analysts clues as to the direction of future monetary policy decisions. Central banks in Brazil, South Korea and Singapore will meanwhile set monetary policy next week.

Employment growth in the UK has slowed to the second-weakest seen in the last six months amid signs of an economic slowdown in the first quarter. The worry is that a subdued labour market will affect consumer spending in the coming months, especially in an environment of rising inflation. There are already signs that households are feeling the strain. Policymakers and analysts will be watching next week's batch of labour market data, as the UK economy is dependent on consumer spending to sustain a solid growth rate.
Slower growth in the US is being accompanied by higher cost pressures despite oil prices moderating recently, sending mixed signals to policymakers. There is a risk of being behind the policy curve should inflation accelerate more than expected. With March data showing manufacturing input costs rising at the fastest rate fortwo-and-a-half years during March, analysts will monitor updated official inflation data next week to confirm signs of building inflationary pressures.
China's price pressures are also under scrutiny. PMI data signalled a slowdown in the pace of economic growth March, alongside rising costs, which is expected to be reflected in the latest producer price index.

Markit Composite PMI and US GDP 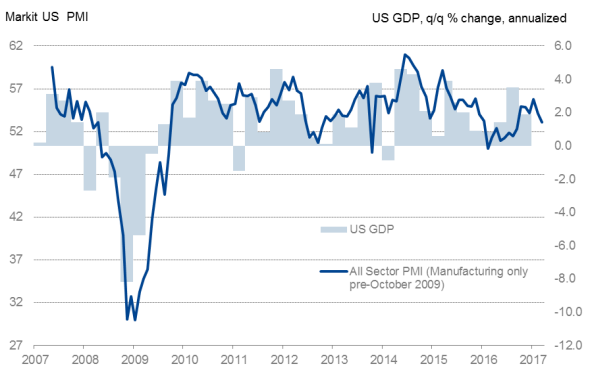 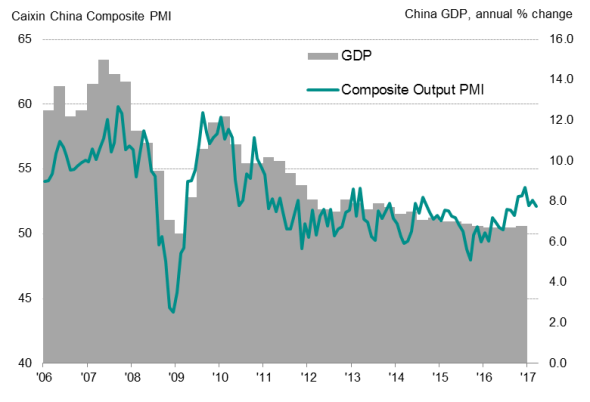 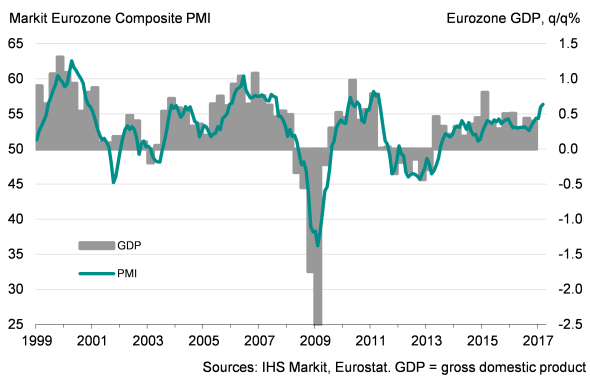 Similarly, the broad-based upturn in the euro area was marred by strong price pressures, according to the Eurozone PMI surveys, which rounded off the strongest quarter since quarter two 2011. While the strong upward price trends highlighted by the PMI data may add to calls for the ECB to consider tightening monetary policy, especially if confirmed by official inflation data, it seems that the central bank will likely maintain its accommodative stance until at least later in the year. ECB President Mario Draghi commented this week that it is too early to tell if higher price pressures will be sustained.
Meanwhile, Brazil's central bank will decide on policy interest rates. The Markit Brazil PMI survey indicated that business activity in the nation was falling at a much slower rate than in previous months, with the March headline PMI at its highest in just over two years, though remaining below the 50.0 no-change mark.
Elsewhere in Asia, central banks in South Korea and Singapore will set monetary policy. Singapore's Ministry of Trade and Industry will also announce the flash estimate of Q1 GDP. The Nikkei Singapore PMI pointed towards a stronger improvement in the health of the Singapore's private sector, with the latest PMI data consistent with an annual GDP growth rate of between 2.5% and 3.0% for the first quarter.
Other key releases include US retail sales, China's total social financing and trade data, plus industrial production figures for euro area, the Philippines, Malaysia, India and Japan.