Important data releases in the US, UK, eurozone and China will be eyed for steers on central bank policymaking.

Expectations of the European Central Bank to step up its quantitative easing programme are growing, given sluggish economic growth and zero inflation in the eurozone. Third quarter GDP results, released on Friday, will therefore be an important steer for policy making. The region's economy grew 0.4% in the three months to June, as a growth spurt in Spain contrasted with stagnation in France and only subdued expansions in Germany and Italy. Business survey data suggest that economic growth has not picked up since Q2 and are consistent with an expansion of 0.4% in the three months to September, a rate which continued to be seen into October.

Eurozone GDP and the PMI 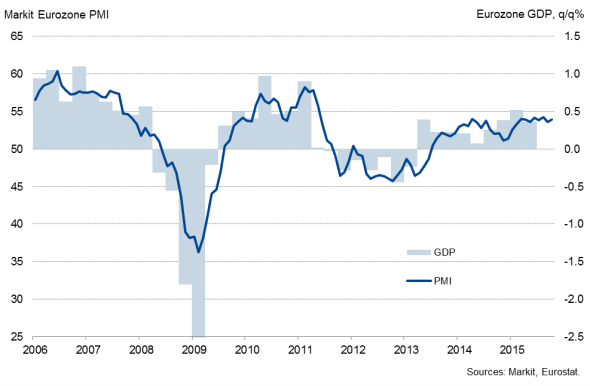 Other important eurozone data releases include industrial production and trade statistics for September. Industrial output fell 0.5% in August, dragged down by declines in Germany, Italy and Spain, and business survey data have highlighted that production and export trends have remained weak in more recent months.

A fleet of data are released in China, including industrial production, inflation and retail sales numbers, providing data watchers with important information on the health of what is now the world's largest economy (in PPP terms). The Chinese economy grew 6.9% in the third quarter, broadly in line with the growth target of 7.0% for the year. While the Caixin China Composite PMI (compiled by Markit) rose from September's 80-month low of 48.0 to 49.9, manufacturing remained a particular weak spot, with operating conditions in the sector deteriorating for an eighth successive month. Official industrial production data, out on Wednesday, will provide policy makers with more information on the sector's health.

Inflation data for October are issued for China on Tuesday. Consumer prices rose 1.6% in September, down from August's 2% and remaining well below the government's target of around 3%. Survey data have shown few signs of the rate picking up. While services prices continue to rise modestly, manufacturing costs are falling amid lower global commodity prices.

In the US, retail sales and consumer sentiment data are likely to add to the policy debate. While the Fed kept interest rates unchanged at their October meeting, a rate hike in December is "a live possibility", Fed chair Janet Yellen told a Congressional committee on Wednesday. Moreover, business survey data point to further moderate economic growth in the US at the start of the fourth quarter, upping the odds of the Fed starting to raise interest rates at its December meeting.

However, if retail sales continue to disappoint, this could be an argument against an imminent US rate hike. In September, shoppers spent just 0.1% more than in the previous month, with August's preliminary 0.4% rise revised down to just 0.2%. Data for October are released by the US Census Bureau on Friday.

In the UK, the Office for National Statistics provides an update on labour market trends. The latest data showed the unemployment rate falling to 5.4% in the three months to August, its lowest level since mid-2008. While a positive jobs report would be an argument in favour of higher interest rates, in its latest Inflation Report, the Bank of England stated that "the outlook for global growth has weakened since August". A rate hike before next May is therefore looking increasingly unlikely. 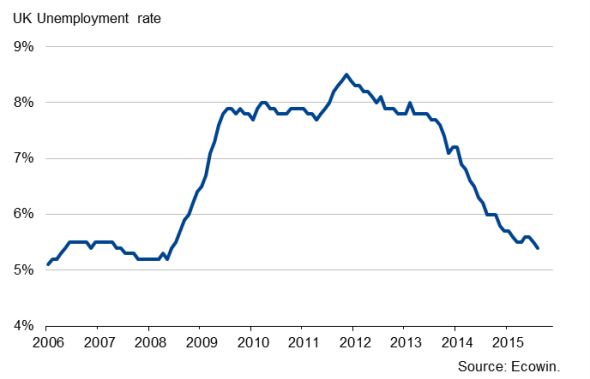 The latest Sentix Index is released in the eurozone.

The US sees the release of employment trends figures.

Business conditions and mortgage lending data are published in Australia.

Manufacturing output numbers are out in South Africa.

In France and Italy, industrial production figures are issued.

Inflation data are published in Greece.

NFIB business optimism and inventory figures are out in the US.

In China, industrial output and retail sales figures are updated.

Employment numbers are issued in Australia.

Preliminary third quarter GDP numbers are meanwhile out in Russia.

Industrial production numbers are published by Eurostat for the currency union.

Inflation data are updated in Germany and France, with the latter also seeing the release of current account numbers.

In Brazil, retail sales numbers are out.

The New Housing Price Index is released in Canada.

Initial jobless claims figures are issued in the US.

Industrial output and capacity utilisation data are issued in Japan.

Third quarter GDP and trade figures are meanwhile released across the eurozone.

Non-farm payroll numbers are published in France, while inflation figures are out in Italy and Spain.

Construction output data are updated by the Office for National Statistics in the UK.

In the US, retail sales, producer price and business inventory data are released alongside the latest Reuters/Michigan Consumer Sentiment Index.