Emerging market bond ETFs are enjoying record inflows this year, but the dollar's recent weakness is causing investors to shift away from established strategies

Investors are sweeping away doubts about emerging market bonds and pouring record amounts into ETFs that track these assets. Although there are four months left in the year, emerging market bond ETFs have already surpassed last years' record inflow ($10.1bn) by more than $5bn. 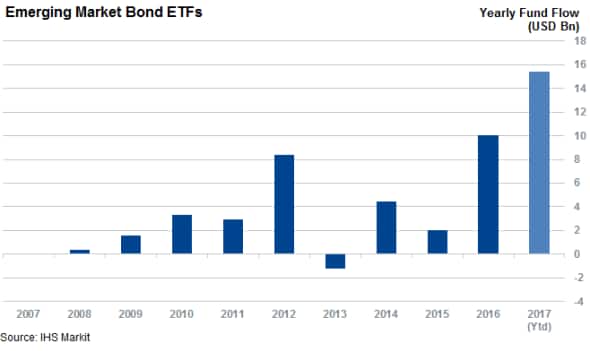 Fears that the Federal Reserve's tightening would negatively impact emerging markets bonds hung large over the last few years - but the three recent rate increases have had no discernible negative impact on investor's risk perception. The IHS Markit iBoxx USD Emerging Markets Sovereigns spreads, which track the extra yield required by investors to hold emerging market debt over US treasuries, have fallen since the Fed started raising interest rates in December 2015.

The Fed's spectre also receded further in light of tame inflation readings and relatively disappointing jobs numbers. Both of these recent numbers pushed the market's anticipation of the next rate rise into 2018.

Fears of a runaway dollar, which would force emerging market borrowers to raise more local revenue, have also been appeased by the newly dovish fed and a 9% retreat in the US Dollar Index.

Global growth is also likely to have played a hand. From last year's relative standstill, the J.P. Morgan Global Manufacturing PMI, which is produced by IHS Markit, indicates that global manufacturing grew in August at the fastest pace in more than six years. Developed market currencies have been at the vanguard of this recent growth spurt, but the surging prices for copper and other industrial metals, will provide a welcome boost to the coffers of emerging market borrowers.

Minimal shorting activity in the largest emerging market bond ETF, the iShares J.P. Morgan USD Emerging Markets Bond ETF (EMB), confirms that investors have no appetite to short the recent rally. Short sellers initially shorted the ETF in the opening weeks of the year, but the funds' strong returns prompted them to rethink this strategy. The demand to borrow shares of the EMB ETF has fallen by more than two thirds from the levels registered earlier in the year.

One particular aspect of the rush into emerging market bonds is a newfound appreciation for assets denominated in local currencies. These formerly niche funds have witnessed inflows representing 73% of their AUM since the start of the year, which is nearly twice the 41% growth registered by dollar denominated funds. Incumbent dollar denominated emerging market bond ETFs still manage two thirds of AUM, but the gap is closing fast. 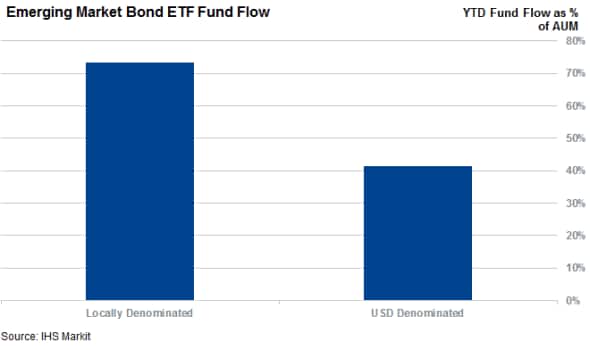 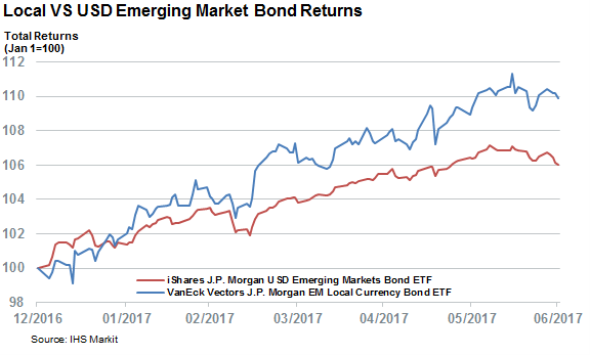 European investors ? who have felt the brunt of the dollar's recent slide ? are most eager to pile up on emerging market bonds. European-listed local currency funds have grown their AUM by a massive 88% since the start of the year.

141 new issue bonds will hit the market next week; including over $330M in new bonds scheduled to be issued by the… https://t.co/bCYgl2shcx