Growth in the Spanish economy remained strong mid-way through the second quarter of the year, with IHS Markit PMI data suggesting that GDP could rise at a faster pace than in Q1.

Higher workloads are feeding through to job creation. This was particularly the case in the manufacturing sector, where the rate of jobs growth hit a 19-year high in May. Sustained hiring will help to make further dents in the still-high levels of unemployment in Spain, something which will inevitably be needed if economic growth is to continue at the current rate.

The PMI surveys for Spain showed private sector output rising sharply again in May. The rate of expansion was little-changed from April's 20-month high. The manufacturing sector performed particularly strongly, with production rising at the joint-fastest pace since the start of 2016.

Should June's PMI data show a continuation of these growth rates, there will be an upside risk to the current IHS Markit forecast of a 0.6% rise in GDP during the second quarter. Historical comparisons of the PMI with GDP suggest the surveys are currently indicative of a growth rate approaching 1%. 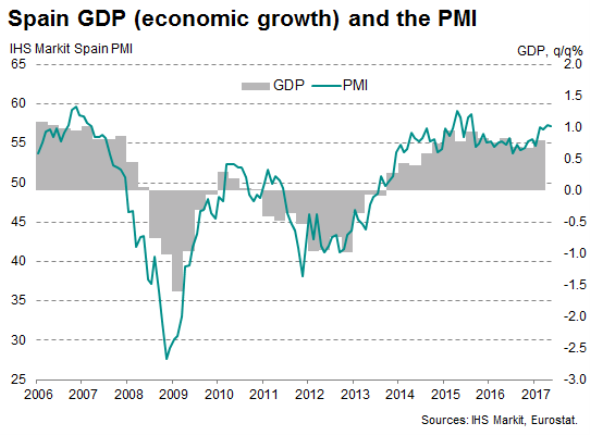 The main highlight from the latest set of PMI data was the strongest rise in manufacturing employment for 19 years. In fact, the rate of job creation was close to the strongest seen since the survey began in February 1998. 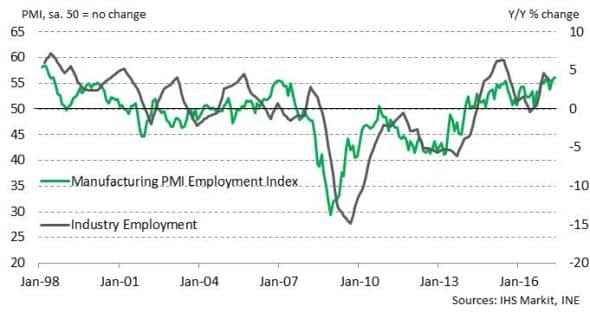 Anecdotal evidence from surveyed companies can help us to identify some of the factors behind the recent bout of hiring. The below word cloud highlights the reasons for hiring provided by manufacturing firms over the past three months. Firms are clearly feeling in a position to take on additional workers in line with strong rises in new orders and higher production requirements. 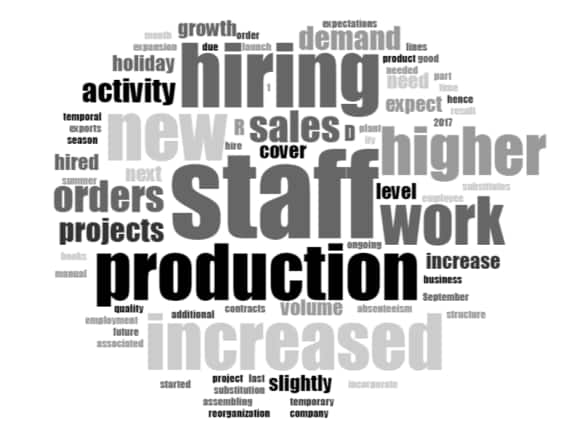 Job creation was not limited to the manufacturing sector in May, as service providers also took on extra staff. The overall rate of payroll growth eased only fractionally from April's recent high and signalled a marked monthly expansion of staffing levels.

Looking at the historical relationship between PMI employment data and official quarterly figures, the latest data suggest that total employment is set to rise at least 2.5% year-on-year in the second quarter of 2017. This would represent around 300,000 extra jobs in the economy over the quarter, further helping to reduce the still-high levels of unemployment in Spain. 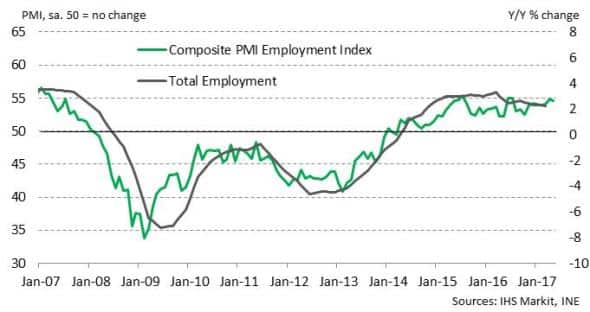 The current positivity surrounding the Spanish economy shows no sign of letting up in the near-term at least. Next month's IHS Markit PMI releases will round up the story for the second quarter of the year. Manufacturing data will be released on 3rd July, with services following on the 5th.

Across the private sector, growth was the fastest since August 2014 (Composite #PMI Output Index at 59.5 in Feb, up… https://t.co/tJLlwFtN9N