The Japanese economy kicked up a gear during March to post the best quarterly PMI performance in three years. New business and hiring continued to grow at solid, albeit slower, rates. The economic upturn however was marred by a margin-squeeze linked to surging costs.

The headline Nikkei Japan Composite Output Index, compiled by Markit, rose from 52.2 in February to 52.9 in March. This signalled the joint-strongest monthly expansion of business activity for over three years.

Furthermore, the March upturn took the average index reading for the first quarter to 52.5, indicating the best quarterly performance for three years. Overall, the PMI data are consistent with nominal GDP rising at an annual rate of 2.5% in Q1.

The manufacturing sector remained a key driver of overall economic growth in the first quarter, although a slower growth rate in output was registered in March. Meanwhile, faster service sector growth provided an additional boost to the latest upturn.

As a whole, Japan's economy heads into the second quarter in relatively good shape. Robust economic growth rates are expected to be sustained unless growth risks intensify. Volumes of new business in both manufacturing and service sectors increased at solid, albeit slower, paces during March.

A slower rise in manufacturing new orders was linked to a waning in export growth, in turn often blamed on greater competition and the yen's recent rally against the US dollar. Although the new export orders index indicated that export sales rose for the seventh successive month, it was the smallest rise since December. 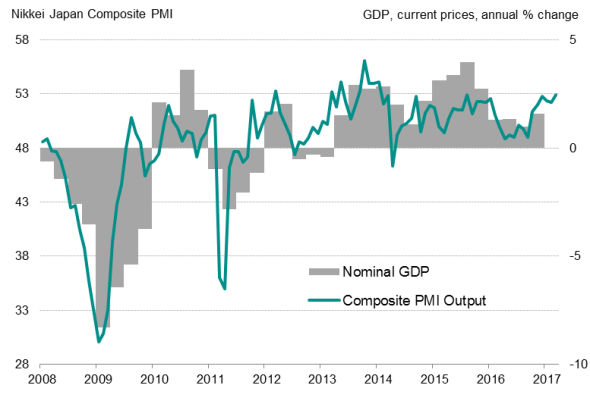 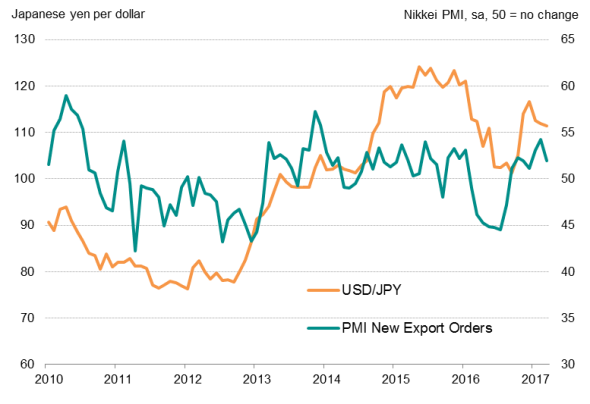 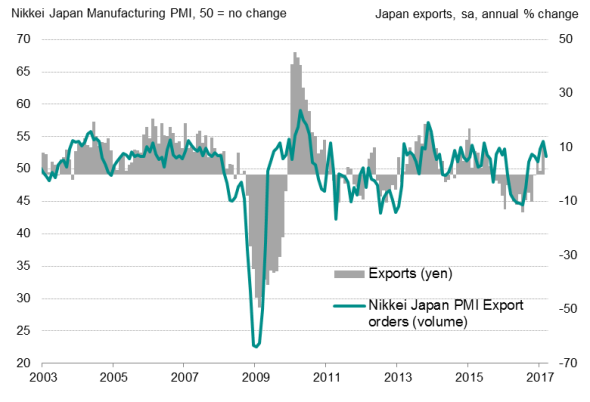 Moreover, the yen has been strengthening since January, up 5% against the US dollar so far this year. Further appreciation of the yen would trim exporters' profits and hurt business sentiment.

Inflationary pressures meanwhile remained elevated in March. The recent appreciation of the yen has not led to any meaningful easing of imported inflation. Especially strong cost increases were recorded in the manufacturing sector, where the rise in average input prices was the second-highest in just over two years, reflecting higher global commodity prices, particularly energy costs. However, recent pull-backs in world oil prices may hint at lower energy costs in coming months.

In response to higher input costs, Japanese firms raised their selling prices by the most since November 2015, although the rate of increase was marginal and below the pace of growth in costs. That said, breakdowns by sector revealed that charge inflation was subdued among manufacturers relative to service providers because of price-conscious clients. Overall, the data suggest that Japan's private sector continued to see a squeeze on profit margins.

Rising cost inflation has so far been mostly absorbed by Japanese companies. This had been evident in the mild increases in charges for Japanese goods and services in the first quarter, and provided an explanation for subdued consumer inflation.

Official CPI data for February showed a 0.3% annual increase in consumer prices, which remained far below the 2% inflation target set by the Bank of Japan (BOJ). For now, there are few signs of inflation accelerating unless firms start hiking selling prices aggressively.

As higher global commodity prices instead of domestic demand were the primary cause for current inflationary pressures, this means the BOJ will likely maintain accommodative monetary conditions for the time being. 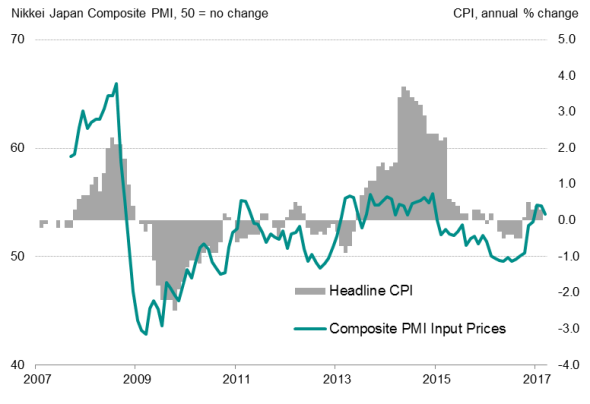 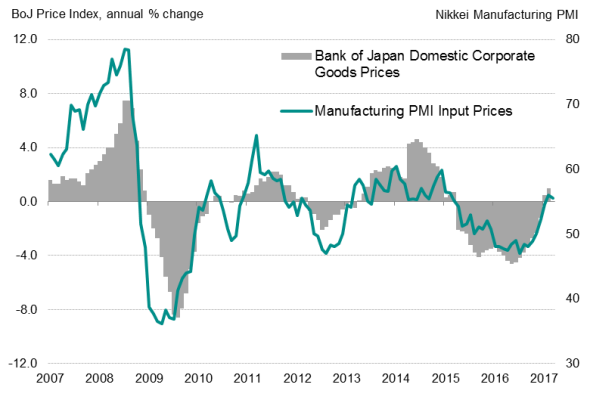