Global growth near two-year high at start of 2017

The global economy started 2017 with growth gaining momentum, according to PMI survey data. The JPMorgan Global PMI, compiled by Markit from its various national surveys, rose for a fifth successive month in January, up from 53.6 in December to a 22-month high of 53.9. 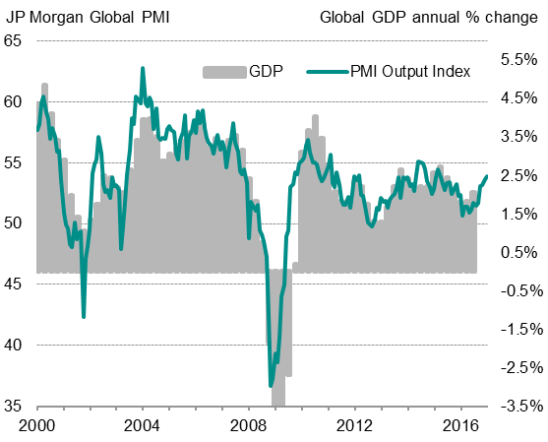 The latest data are consistent with global GDP rising at an annual rate of 2.5% at the start of the first quarter.

The upturn in growth was led by the developed world, where the PMI struck a 14-month high in January. Emerging market growth also edged up, rising to the highest for 23 months, but continued to underperform relative to the rich world - a trend that has been evident throughout the past three years. 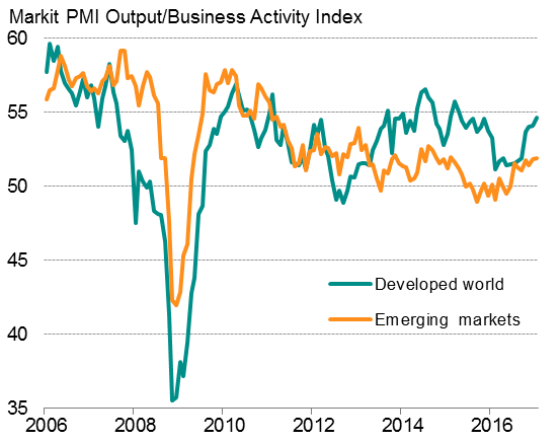 Encouragingly, a newly-launched index tracking global business optimism about future output rose to a 20-month high, with improved sentiment about the year ahead seen in both developed and emerging markets. 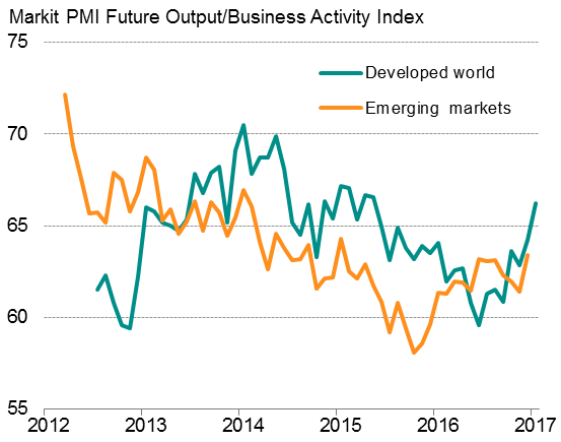 Other global PMI sub-indices add to the evidence that growth is likely to continue to accelerate in early-2017. First, inflows of new business rose globally at the fastest rate since September 2014, increasing at improved rates in both manufacturing and services. Second, firms added to their payrolls at a rate equal to December's 19-month high. Third, backlogs of work showed the largest increase for 22 months. 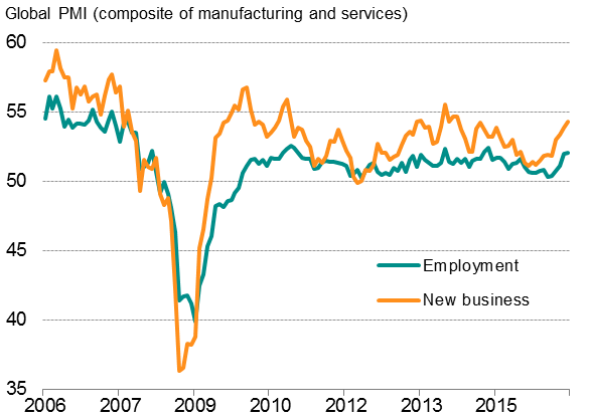 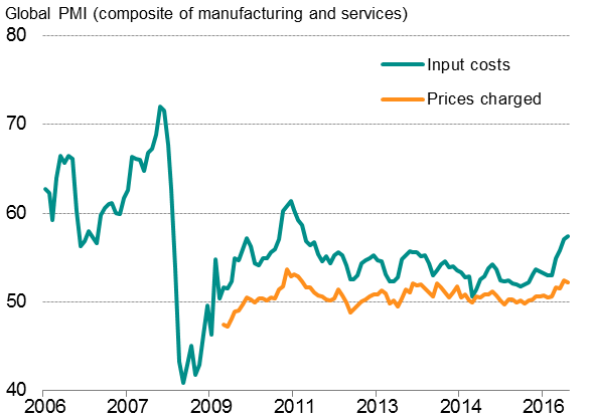 Rates of cost inflation accelerated in both manufacturing and services, widely linked to higher oil and other commodity prices, and notably for fuel and energy.

Especially strong cost increases were seen in the UK and Eurozone, with high commodity prices exacerbated by weak exchange rates against the US dollar.

Average prices charged for goods and services meanwhile rose as firms increasingly passed higher costs on to customers. While selling price inflation eased slightly compared to December, the rise was nevertheless still the second-largest in over five-and-a-half years.

Robust growth was again seen across the major developed economies, led by the US. Markit's US PMI surveys showed the strongest rate of expansion for 14 months. Growth accelerated in both services manufacturing despite the strong dollar continuing to act as a drag on exports. The January PMIs are broadly consistent with the US economy growing at an annualised rate of 2.5%. Optimism about the business outlook in the US has also risen to the highest for over a year-and-a-half.

The rate of growth signalled by the UK PMI surveys slipped below that of the US, albeit by a small margin, linked mainly to a weakened rate of expansion in the service sector. Manufacturing reported the largest gain in production for almost three years. Despite the slowing in January, the UK surveys are consistent with the economy growing 0.5% at the start of the first quarter. Optimism also rose to an 17-month high.

The January Eurozone PMI indicated that the region is growing at the fastest rate since mid-2011, comparable to GDP rising at a quarterly rate of 0.4%. Employment growth accelerated to the highest since 2008 amid brighter prospects as firms shrugged off political uncertainty. Business confidence about the year ahead was the highest since the series started in July 2012.

The Nikkei Japan Composite PMI meanwhile dipped in January but remained indicative of a steady improvement in the health of the Japanese economy. Encouragingly, the latest surveys showed growth of new orders to have accelerated to the fastest in three years, with optimism about future output surging to the highest in 17 months. The upturn prompted Japanese companies to continue growing their workforce numbers, with January seeing the strongest monthly employment growth for over two-and-a-half years.

Russia recorded the strongest rate of expansion of the major emerging markets, with the PMI reaching its highest since June 2008. China's growth rate meanwhile eased from the near four-year high seen in December, with the Caixin composite PMI dropping to a four-month low, albeit remaining elevated by recent standards. More encouraging was the index of future output expectations, which reached its highest in ten months.

India's economy showed signs of stabilising after the downturn cause by disruptions emanating from demonetisation, according to the Nikkei PMI, but Brazil's contraction deepened again, with the composite PMI down to a five-month low and indicative of a further severe decline in business activity. 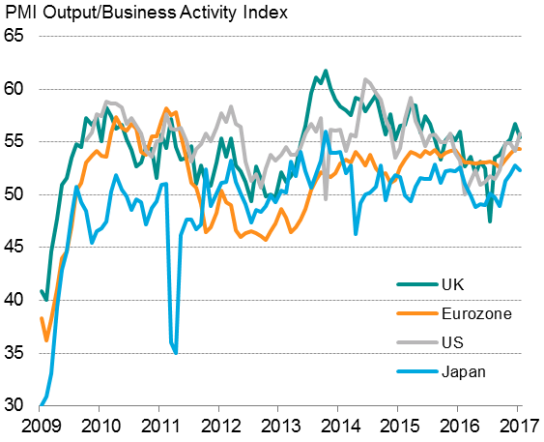 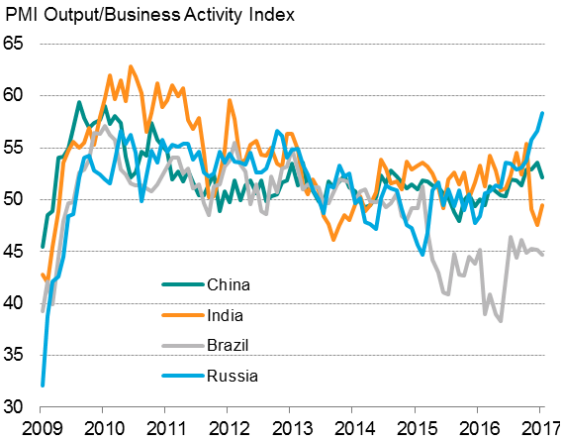