The global economy lost further momentum as 2014 came to a close, according to Markit's worldwide PMI surveys. The JPMorgan-sponsored Global PMI fell to a 14-month low of 52.3 in December, down from 53.1 in November.

Although remaining above 50 to therefore signal ongoing growth, the latest reading indicated that the pace of expansion has now slowed for five successive months, down to a level with global GDP rising at a subdued annual rate of just less than 2.0%. By comparison, growth rates approaching 4% or more were the norm in the five years prior to the global financial crisis.

The developed world continued to outperform the emerging markets, but with growth picking up in the latter to the fastest since September while the developed countries collectively recorded the weakest expansion since October 2013, the gulf was the narrowest for 14 months. 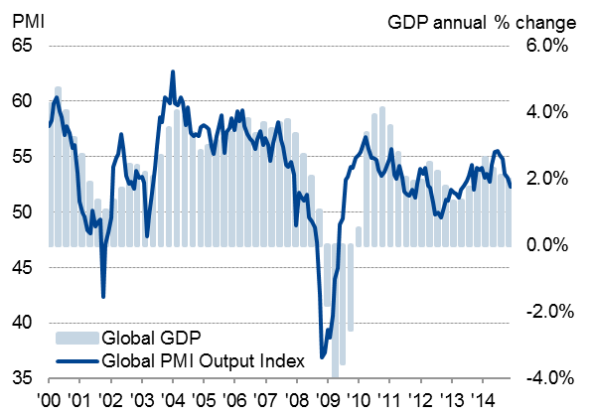 The US and UK, which have led the recent global expansion, both saw weaker growth rates in December, with the former seeing a particularly marked slowdown.

Excluding the drop in activity caused by the October 2013 government shutdown, the US PMIs signalled the weakest expansion since 2012, with growth having slowed for a sixth consecutive month in December. The survey data suggest that the pace of US economic growth will have slowed in the fourth quarter compared to the 1.2% quarterly (5.0% annualised) expansion seen in the third quarter, down to around 0.6% (2.5% annualised) or perhaps even less.

In the UK, the "all-sector' PMI fell to a 19-month low, rounding off the worst quarter for a year-and-a-half. The surveys point to GDP having risen 0.5% in the fourth quarter, that's down from 0.7% in the three months to September but, as with the US, remains a reasonably robust pace of expansion. 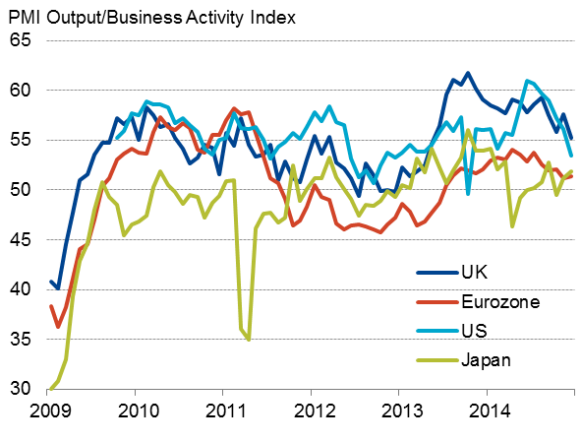 Slower growth in the US and UK was offset by slight expansions in the eurozone and Japan, though both saw ongoing modest rates of growth with the single-currency area in particular clearly holding back the global economy.

The Eurozone PMI picked up only marginally from November's 16-month low to paint a picture of the region struggling to avoid a renewed downturn, with GDP set to rise by a mere 0.1% in the fourth quarter.

Of greatest concerns are the downturns in France and Italy. The French PMI surveys signalled a drop in private sector economic activity for the eighth month running, albeit with the rate of contraction easing in December, while Italy saw a renewed contraction after eking out only modest growth in the prior two months. The surveys point to GDP falling by 0.1% in both France and Italy in the fourth quarter, though rising government expenditure (not covered by the PMIs) may help avoid contractions.

While growth picked up in Germany in December, the pace of expansion was only a modest improvement on November's 17-month low. The survey data suggest the Germany economy expanded by a modest 0.2-3% in the fourth quarter.

Some euro countries, notably Ireland, the Netherlands and Spain, continued to see robust rates of expansion, but clearly remain vulnerable to any escalation of the ongoing crisis facing the region, notably in terms of Greek elections, and weak demand in neighbouring countries.

Japan pulls out of recession

Japan meanwhile looks to have pulled out of the recession induced by last April's sales tax rise, as the "all sector' PMI rose to a three-month high in December. GDP rose 1.4% in the first quarter, before falling 1.7% and 0.5% in the second and third quarters respectively, pushing Japan into its fourth recession since the global financial crisis. However, the recent PMI data provide evidence that the economy will have risen from recession in the fourth quarter, buoyed by signs of renewed life in the service sector alongside a steady but unspectacular manufacturing upturn.

Although growth picked up slightly across the world's main emerging markets on average, rates of expansion remain subdued at best, and shadows of those seen prior to the global financial crisis.

The HSBC/Markit PMI surveys for China also signalled ongoing growth in December but, like India, the rate of growth slowed from an already lacklustre pace, suggesting China's economic growth looks set to weaken from the 7.3% annual pace seen in the third quarter, its lowest since early-2009.

Brazil and Russia meanwhile both contracted in December. Official GDP data showed Brazil pulling out of recession in the third quarter, but the PMIs signalled contraction for a third month running in December, suggesting the country suffered a renewed downturn in the fourth quarter. A consolation is that the rate of decline moderated in December.

No such moderation was seen in Russia, however, where the PMIs signalled a further deepening of the country's downturn. The surveys have now signalled a contraction of business activity for three successive months, with December seeing the third-strongest rate of contraction since 2009. 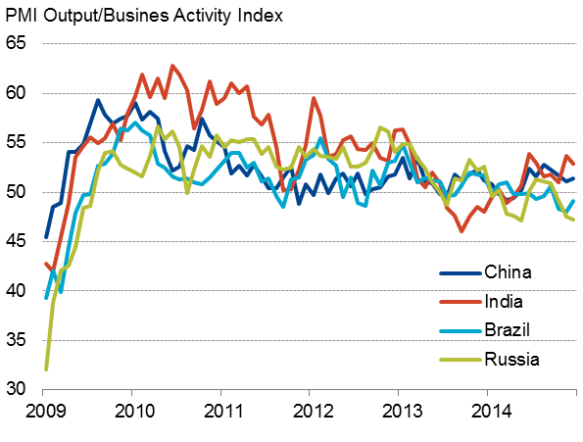