Despite efforts from the government and central bank to stimulate growth, Japan's economic recovery remains anaemic. The country has been besieged by a combination of natural calamities, soft external demand and weak household consumption this year, and September survey data suggest there is no end yet in sight for the beleaguered economy, pointing to an ongoing decline in business activity.

The Nikkei Japan Composite PMI Output Index, a weighted index combining manufacturing and services PMIs, signalled a contraction in the overall private sector for the sixth time in the past seven months. The September reading of 48.9 was down from 49.8 in August and the lowest since April. This brought the quarterly average to 49.6 in Q3. While this is marginally higher than 49.0 in Q2, it is lower than the 51.2 average seen in the first quarter. 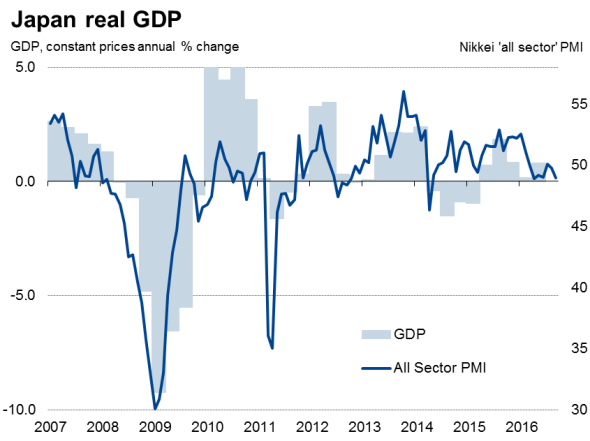 Although the September PMI data, compiled by IHS Markit, showed manufacturing conditions stabilising, services activity fell at the fastest pace in nearly two-and-a-half years. The PMI suggests therefore that the economy looks set for another near-stagnation in the July-September period. 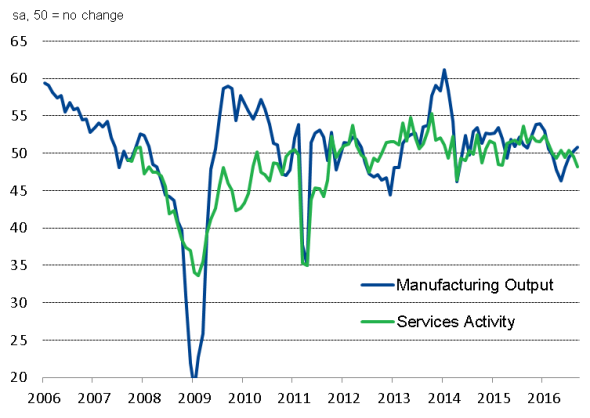 The September surveys also showed that new business volumes were steady for a second successive month, an improvement on the declines seen in the prior five months but still short of the expansions seen at the start of the year. Weak global demand, the strong yen and feeble household spending were widely reported to have again dampened order books.

The Nikkei PMI has nevertheless indicated a slower pace of decline in new orders in Q3 compared to Q2. This has emboldened companies' expectations, with firms projecting greater output in the future due to preparations for the 2020 Olympic Games, new expansion plans, improved advertising and a further recovery from the Kumamoto earthquakes. Employment consequently rose, albeit only marginally, for the first time since May. However, although up on the lows seen earlier in 2016, business optimism in the service sector remains muted relative to the average over the past four years.

Inflation remains an elusive goal. Stable input prices enabled companies to lower their charges for the seventh time in the past eight months. Lower prices helped to boost sales amid sluggish growth, but the danger is that this further dampens inflation expectations.

Against signs of slowing economic growth and mounting deflationary pressures, the Bank of Japan re-calibrated their monetary policy framework in September. As Japan's economy continues to struggle, this new monetary framework and incoming fiscal stimulus will be welcomed. However, tepid economic growth is expected to persist. IHS Markit projects Japan's economy to expand 0.6% in 2016 and accelerate to just 0.7% in 2017. 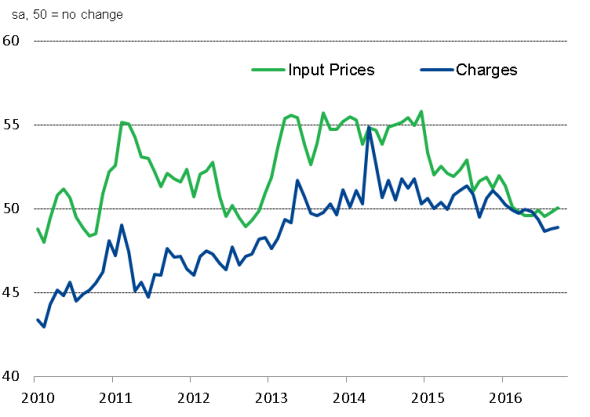