Tentative signs of stronger emerging market growth continued to appear in August, but with the developed world stuck in a low gear the global economy continued to expand at one of the weakest rates seen over the past three years. 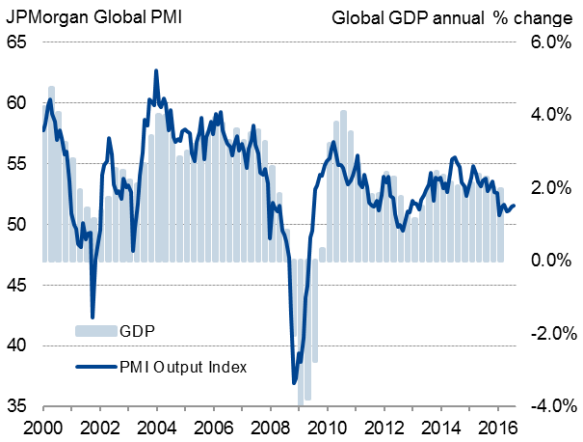 The JPMorgan Global PMI, compiled by IHS Markit from its various national surveys, inched higher for a third successive month from 51.5 in July to 51.6 in August. Although rising, the PMI readings for the last two months point to annual global GDP growth of only 1.5% in the third quarter, suggesting the global economy remains locked in its slowest growth phase for just over three years.

While emerging markets continued to enjoy their strongest expansion for one-and-a-half years, the rate of growth remained weak by historical standards. Similarly, the developed world continued to report only a sluggish expansion, having down-shifted a gear in February, enduring its worst spell since early-2013, although the rate of growth nudged up to a four-month high in August.

The upturn was again driven by manufacturing, where factory output growth hit the highest since last November, while service sector activity rose only modestly. The latter nevertheless saw the best performance since April. 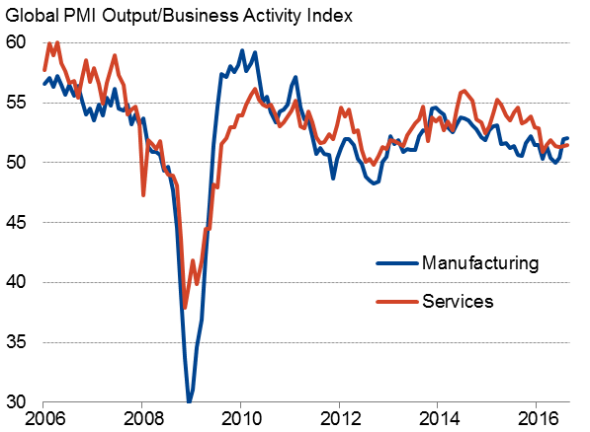 Other indices from the surveys sent mixed messages. Growth of new orders picked up to a seven-month high, but employment rose at the slowest pace since April 2013. Job creation was again driven by the developed world as emerging markets saw a net drop in workforce numbers, though even developed-world hiring hit a three-year low. 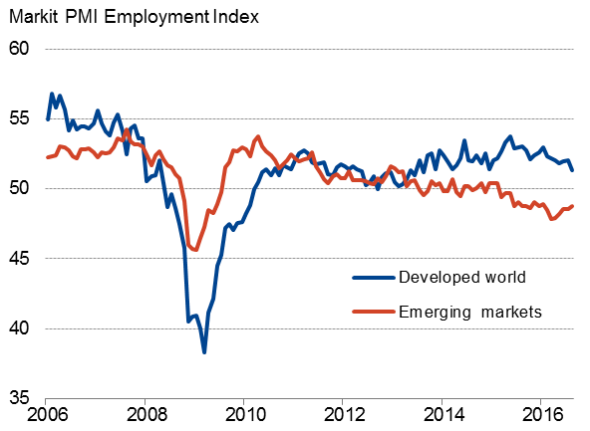 Looking at the largest developed world economies, the biggest news was a record rise in the UK PMI in August, albeit after a record decline in July. The data suggest the uncertainty created by the June 23rd vote to leave the EU has eased, though growth has clearly slowed sharply. The survey data leave the UK looking at a stagnant economy so far in the third quarter after 0.6% growth in the second quarter.

A dip in the August US composite PMI meanwhile paint a lacklustre picture of only modest growth, suggesting the economy has so far failed to gain momentum after the weak trend seen in the first half of the year. The surveys are pointing to annualised GDP growth of around 1% again in the third quarter, with hiring also slowing. However, at least some of the slowdown can be attributed to uncertainty in the lead up to the presidential election, implying growth could rebound later in the year.

The Eurozone PMI also slipped to the lowest for just over one-and-a-half years in August, though continued to signal 0.3% GDP growth in the third quarter. Spain continued to register solid growth and France showed welcome signs of an upturn after a stagnant second quarter, but growth slowed in both Germany and Italy.

Japan's economy looks to be stagnating in the third quarter, with the composite Nikkei PMI falling slightly below the neutral level of 50.0 to register a marginal drop in business activity, reversing a fractional rise in July. 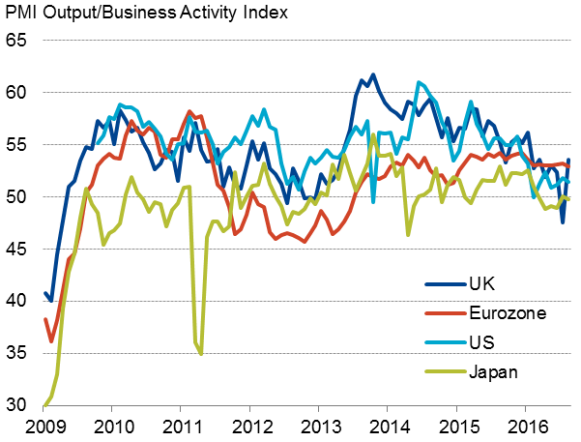 Looking at the four largest emerging markets, Brazil was again the worst performer as the rate of decline accelerated slightly, though some comfort can be sought from the downturn remaining far less severe than seen in the first half of the year. The service sector continued to act as the major drag.

India saw the best performance of the BRIC's with the Nikkei PMI climbing to the highest since February 2013, with growth accelerating in both manufacturing and services. 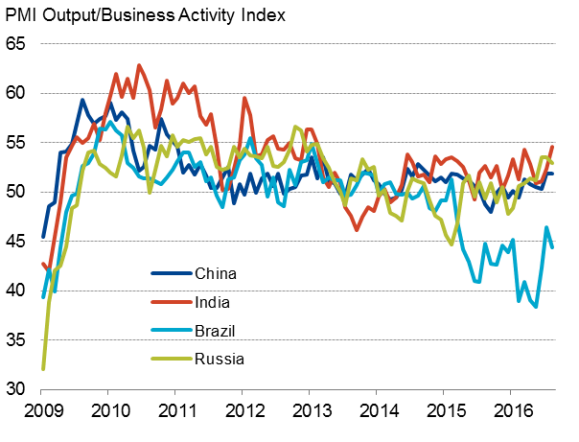 Russia's economy also continued to enjoy its strongest growth spell since 2013, thought the pace of expansion lost a little momentum in August thanks to weaker service sector growth. The sustained growth nevertheless makes a strong contrast to the decline seen earlier in the year.

The composite Caixin PMI for China meanwhile indicated further robust expansion of business activity in August, leaving the economy on course for its best quarter for two years. While the upturn was led by the service sector, manufacturing enjoyed the first back-to-back monthly rise in production for almost one-and-a-half years.

The disappointing news in the emerging markets came from the PMI employment indices, which showed further job losses in Brazil, China and Russia and a stagnant picture in India. Emerging market employment has now fallen continually over the past one-and a-half years, according to the PMI surveys.