The retail sector has delivered for shorts time and time again this earnings season-as evidenced by RH last week- and short sellers are lining up to profit from further earnings disappointments in five general and specialty retail firms next week. 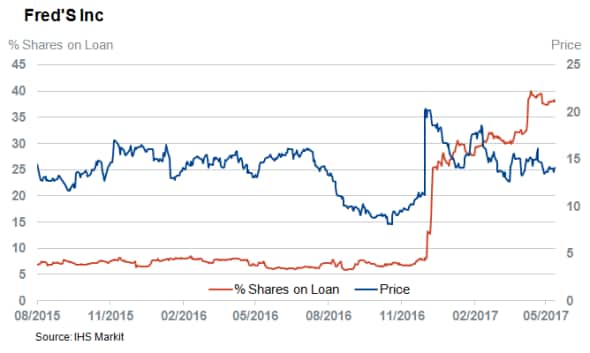 This week's highest conviction short is pharmacy Fred's which has seen short sellers steadily build their positions to the current all-time high of 38% of all outstanding shares. Most of this buildup in short interest happened since the firm announced a deal that would see it pickup over 850 stores spun out from the Walgreen's/Rite Aid merger. The high elevated shorting activity represents skepticism about the deal's completion after the initial euphoria surrounding the tie-up, which doubled Fred's share price, waned as Walgreen merger failed to gain regulatory approval. This loss of momentum has seen Fred's shares lose half of the ground gained back in December.

While short sellers are most active among bricks and mortar retailers, an online presence doesn't exempt a firm from short sellers' scrutiny as newly listed car website Carvana has been the target of heavy short selling in the run-up to its inaugural set of earnings. The-still unprofitable-e commerce platform is promising to transform the car buying experience by cutting out dealers from the used buying process. While promising, the company's ambitious plans have failed to inspire the equity market as its shares are trading a third lower than their IPO price. Short sellers feel the fall in the company's shares may have some room to run as demand to borrow Carvana shares represents over a fifth of the free float.

The other interesting trade that will be tested among this weeks' earnings announcements will be the ongoing avocado short which has developed in recent months after prices of the on trend fruit "skyrocketed". This trend boosted shares of avocado grower Calavo to new all-time highs. This surge has started to attract some skeptics however as demand to borrow Calavo shares has jumped to over 20% of the total shares outstanding, over four times the levels seen 12 months ago. 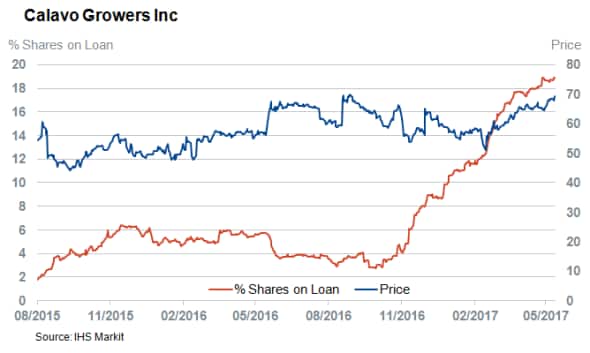 Swiss mechanical firm Burckhardt Compression tops the list of European firms announcing earnings this week as it has just under 20% of its shares outstanding on loan, more than twice that of Heidelberger which comes in as the second most shorted company set to announce results. The Swiss company has been the target of consistent short selling in recent months as bears targeted the firm's high exposure to the oil & gas sector which has been actively trimming the kind of capital investments which Burckhardt draws its revenues from. 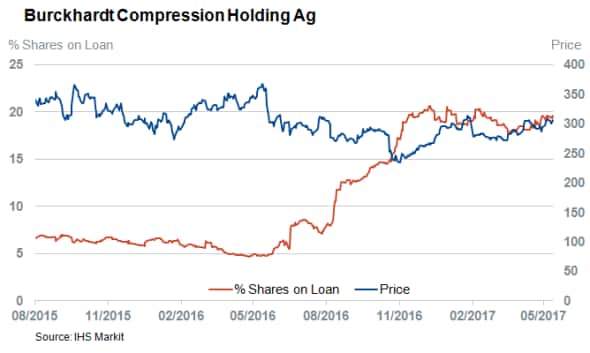 French beverage firms Marie Brizard and Remy Cointreau also find themselves the target of short selling in the run-up to earnings as they both have over 3% of their shares out on loan. The latter of the two firms used to much more shorted, however, recovery in the Chinese end market has prompted short sellers to more than halve their positions over the last 12 months.

Small cap Japanese software firm make up the entirety of the most Asian firms seeing high short interest in the run-up to earnings next week. The most shorted of this quixotic lot is Morpho Inc, a developer imaging technology which has 18% of its shares out on loan. 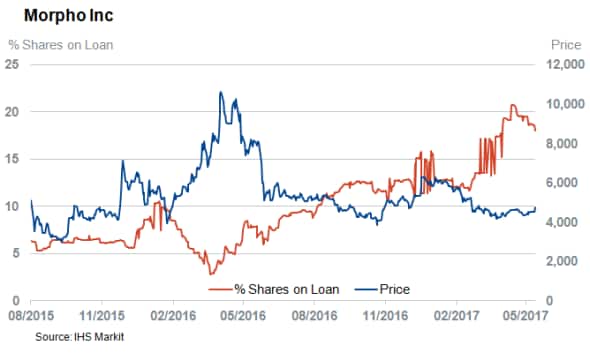