The UK PMI surveys indicate that the economy is likely to regain some momentum in the second quarter after a sluggish start to 2017. However, a slowing in May poses some downside risks to the near-term outlook and is consistent with expectations of the economy only eking out modest growth. 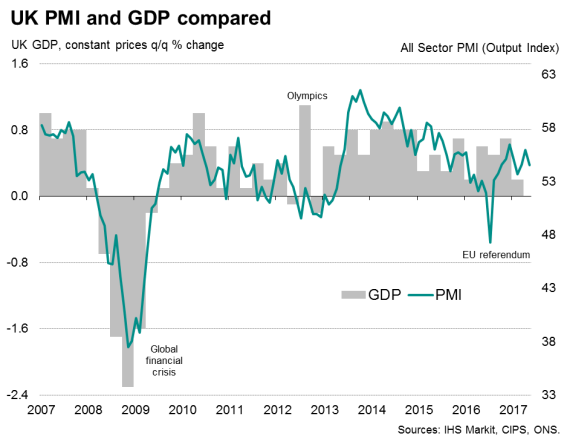 Solid employment growth meanwhile continued to be recorded in May, though firms remained cautious about the outlook. Optimism is running below the recent long-run average, weighed down principally by concerns over Brexit, political uncertainty and weaker spending by households. 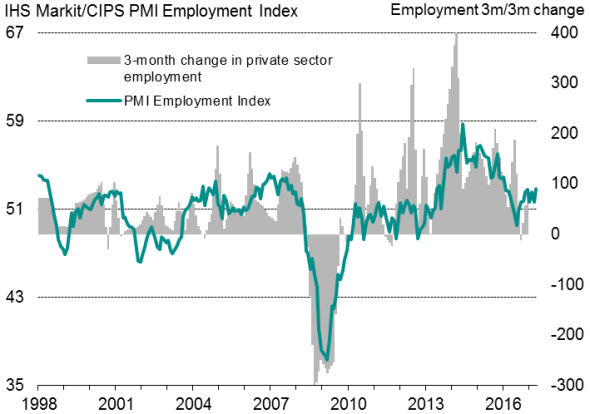 The IHS Markit/CIPS 'all-sector' PMI fell to a three-month low of 54.5 in May, down from 55.9 in April, but remained firmly in expansion territory. Thanks to the strong April number, the second-quarter average of 55.2 is still up on the first quarter's average of 54.4, and is historically consistent with the economy growing at a robust 0.5% rate.

Although the slowing in growth signalled in May poses some downside risks, the PMI data suggest that the three months to June should see GDP growth accelerate from the disappointing 0.2% expansion seen in the first quarter. IHS Markit's current forecast is for 0.4% GDP growth in the second quarter. 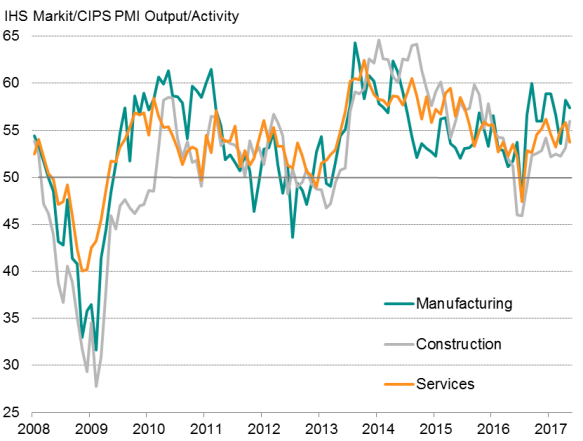 The slower growth recorded in May was mainly a reflection of a weaker rate of expansion in the service sector, where the latest rise in business activity was the smallest since February.

Within services, it was the consumer-facing sectors that have seen the most marked slowing in recent months. The hotels, restaurants & catering sector saw growth slow to near stagnation in May, while other personal and consumer service providers have reported only modest growth in activity so far in the second quarter. The strongest expansions have meanwhile been seen in financial services, transport & communications, and business-to-business service sectors. 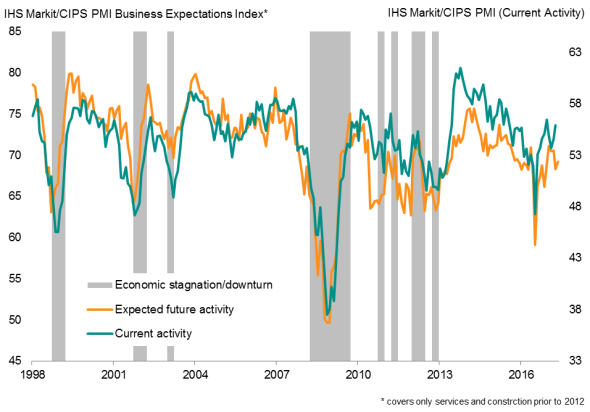 Growth also slowed in manufacturing, though the sector continued to expand at a strong pace. The rate of factory output growth remained above both the average seen so far this year and the average recorded in 2016. Within manufacturing, the weakest expansion was recorded by consumer goods producers, as has been the case over the past six months. Robust growth at investment goods producers (many of which are manufacturers of plant and machinery) pointed to improving capital expenditure.

The slower rates of expansion in services and manufacturing contrasted with an acceleration of construction activity growth to a 17-month high. A marked upturn in house building, alongside faster commercial construction growth, was accompanied by a further robust rise in civil engineering activity.

Robust demand growth also continued to be signalled by the surveys. Inflows of new business rose at the second-highest rate so far this year. Factory new order growth was the second-highest in three years, while new work in the construction sector hit a five-mointh high. Further solid growth of service sector new business was also reported, albeit easing from April.

The number of companies expecting their own activity levels to rise over the coming year continued to exceed those expecting a downturn, but remained slightly below the average seen over the past five years. Companies remain worried primarily about the uncertainty surrounding Brexit, as well as political uncertainty (both at home, as the general election nears, and abroad). Consumer-facing companies also remained worried about household spending being under pressure from rising prices. Manufacturing firms grew increasingly more optimistic than service sector and construction companies. 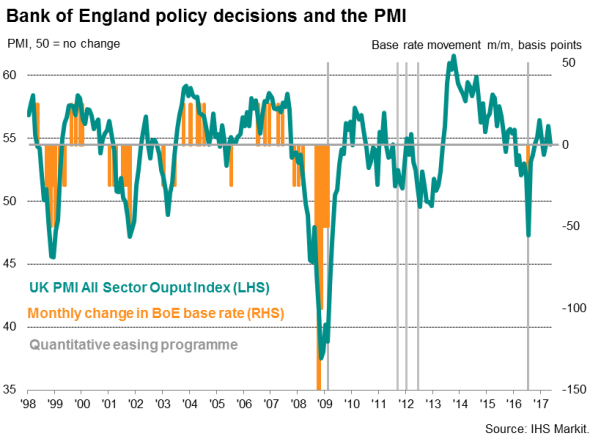 Historical comparisons of the PMI with Bank of England policy indicates that slowing in output growth signalled in May brings the survey's activity indicators back into line with a neutral policy stance.

Further 'dovish' signals were sent by the survey's price indices. Average input costs across the three surveys rose at the slowest rate for eight months, reflecting weaker global commodity prices as well as the recent firming of the exchange rate. While the surveys still indicate that higher costs will put upward pressure on consumer prices in coming months, the recent slowing of input cost inflation is consistent with consumer price inflation cooling later in the year. 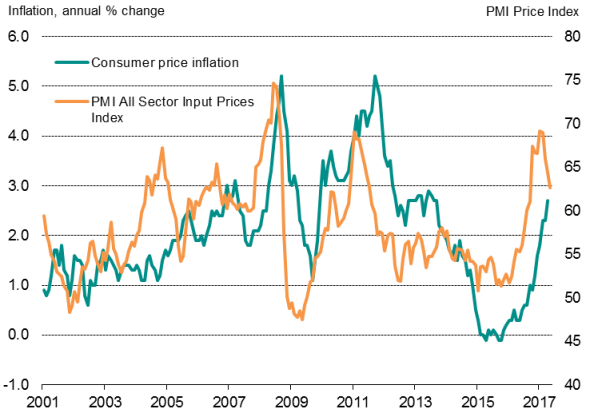