The global economy sustained robust growth momentum at the start of the second quarter, according to PMI survey data. Slower growth in the emerging markets was offset by stronger developed world expansion, led by Europe, leaving an overall picture of the global economy continuing to enjoy its best spell for two years.

The JPMorgan Global PMI", compiled by Markit from its various national surveys, recorded 53.7 in April, unchanged on March and in line with the average seen over the first quarter. Recent readings are higher than at any time since early 2015 and broadly consistent with global GDP growing at an annual rate of 2.5%. 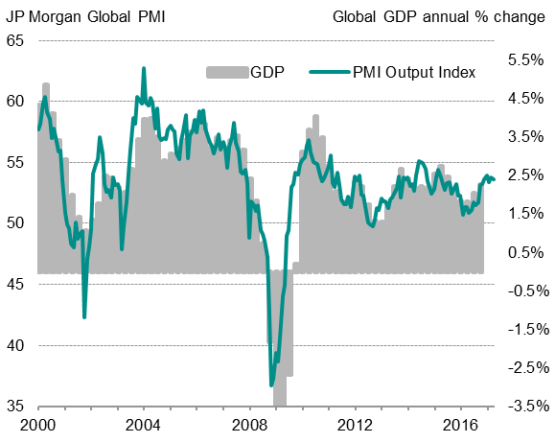 While the Emerging Market PMI fell from 52.6 in March to a three-month low of 52.0 in April, the Developed World PMI edged up from 54.1 to 54.3, its second-highest reading in almost one-and-a-half years. 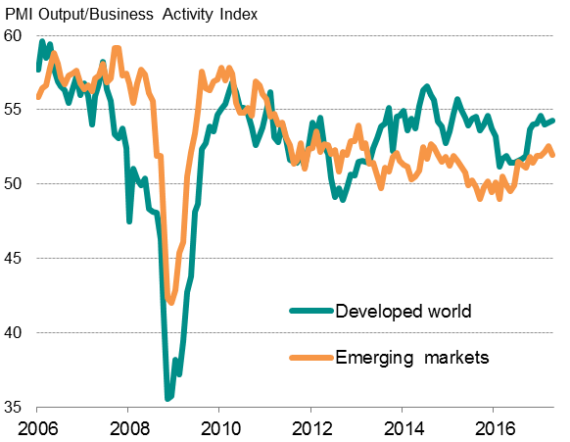 Of the four largest developed world economies, growth was led by the eurozone for the third month running, with the composite PMI hitting a fresh six-year high of 56.8 in April. The latest reading is historically consistent with a 0.7% quarterly GDP growth rate at the start of the second quarter. Encouragingly, solid growth was seen across all four of the largest euro member states. Manufacturers continued to benefit from the weaker euro and consumer spending was buoyed by a further improvement in the labour market, with job creation holding close to a ten-year high. The strong data bode well for second quarter euro area growth forecasts to be revised higher. IHS Markit is upping its forecast to 0.4%, albeit still down from 0.5% in the first quarter. 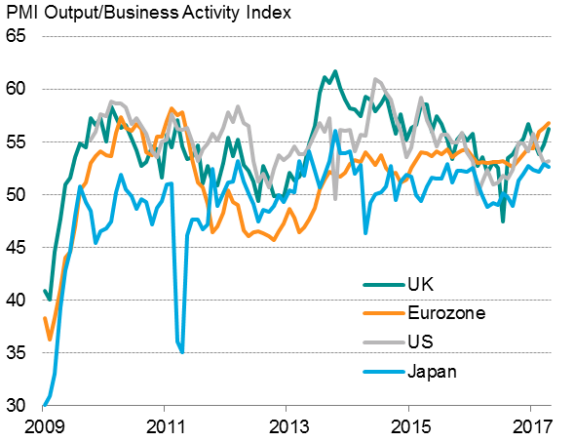 UK growth also accelerated in April, up for a second month running, rising to the second-highest in 21 months. The UK all-sector PMI reached 56.0, a level historically indicative of a 0.6% quarterly GDP growth rate, on the back of a hat-trick of faster growth in services, manufacturing and construction. However, consumer-facing sectors continued to struggle, linked in many cases to spending being squeezed by higher prices. The recent upturn in the indicators has prompted IHS Markit's economists to upgrade their forecasts for second quarter GDP to 0.4% compared with 0.3% in the first quarter.

While Europe surprised on the upside, a considerably weaker PMI reading was meanwhile seen in the US. Although IHS Markit's US composite PMI rose to 53.2 in April, that was only slightly above March's six-month low and indicative of only modest economic growth in the region of 1.5% annualised (0.3-4% quarterly). It's likely, however, that GDP data for the US will rebound in the second quarter, in part due to seasonal distortions evident in the official data and stronger consumer spending. IHS Markit's economists are currently forecasting a rebound to around 3.3% annualised growth in the second quarter after the lacklustre 0.7% pace seen in the first three months of the year.

In Japan, the composite Nikkei PMI fell from March's recent peak to 52.6, but still signalled one of the fastest rates of expansion seen over the past three years. The data add to a recent flow of improving news on the health of the Japanese economy which has led us to raise our forecasts for 2017 GDP growth to 1.3%. 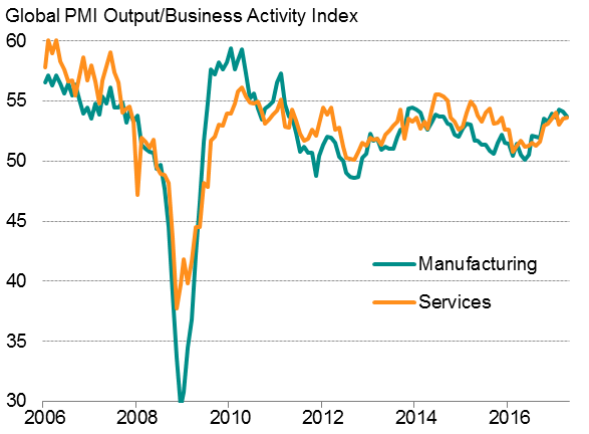 While a key development in the first quarter of 2017 was a revival of emerging market growth, April saw EM growth slow, albeit with a mixed bag of PMI surveys.

The softer pace of expansion was mainly the result of a fall in the Caixin composite PMI for China to a ten-month low of 51.2; a consequence of weaker rates of expansion in both manufacturing and services. The renewed slide in the PMI adds to widespread expectations that the acceleration of GDP growth to 6.9% in the first quarter will prove short-lived.

Growth also slowed in India, with the Nikkei PMI down to 51.3. On the other hand, the fact that the PMI remained in growth territory for a third month running represents a marked improvement on the downturn signalled late last year and suggest the economy continues to recover from disruptions caused by the government's withdrawal of high denomination bank notes.

similarly, a waning of growth in Russia needs to be viewed in the context of recent strong numbers. The PMI reading of 55.3 in April was the lowest since October, but still represented a solid pace of economic growth, with the service sector seeing especially buoyant activity.

Finally, the best news from the emerging markets perhaps came out of Brazil, where the PMI rose above the neutral level of 50 for the first time since February 2015. The reading of 50.4 signifies a welcome end to a two-year downturn that has been the steepest in Brazil's modern history. 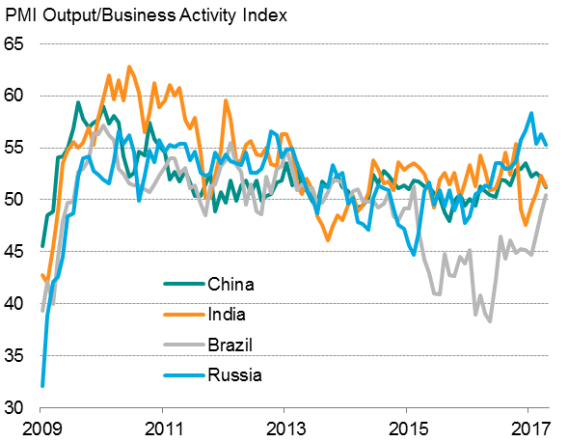