Three Macroeconomic Trends for FX Traders to Watch in 2017

On a global scale, 2017 is the year of change - we've experienced the inauguration of US President Donald Trump, the triggering of Brexit by UK Prime Minister Theresa May, systemic uncertainty in the Eurozone and renewed prospects for emerging markets.

Foreign exchange (FX) market participants are closely monitoring global macroeconomic trends and there are three key areas that currency traders should focus on.

Some observers believe the rise of populism inspired Brexit and Trump's victory over polling-odds. It is widely thought that those left behind from the fruits of globalization also feel battered by fiscal austerity and the perceived threat of foreigners; these notions threaten the core of Europe and many institutions of the Eurozone.

While the Dutch elections in early March provided some respite, the bigger threat and game-changer has always been the French presidential elections in April and May. Marine Le Pen's National Front party may break through given the unpopularity of established French parties.

The German elections follow in September, providing an additional gauge on whether the populist wave has crested - or not. And let's not forget the Brexit negotiations, which are likely to start next month and prove, like all divorces, tortuous and protracted.

Analysis & Forecast: To a degree, markets are better prepared for political risk events and have largely discounted them. Nevertheless, a genuine political shock, like a win for Le Pen, could have devastating consequences for currency markets. In a shock scenario, a capital flight to safe havens - such as US treasuries and German bonds - may result in the Euro significantly weakening, while the dollar, yen and Swiss Franc rise.

The US experienced a swifter recovery cycle than other economies, resulting in two minor interest rate increases; in Europe, Japan and the UK, ongoing quantitative easing policies have been less successful and will remain in place for the next few years (figure 1).

The Trump administration's pro-growth and pro-business policies have yet to be fully formulated, but they have already kindled optimistic animal spirits in the US stock market, attracting foreign savings and lifting the dollar against all-comers in the process.

Analysis & Forecast: On the back of a strengthening recovery, IHS Markit expects the dollar to continue to strengthen in the near term - however, the pound and euro are also expected to gain traction beginning in 2018 (figure 1).

Emerging Markets and Commodities are Back

Emerging market economies have been hit hard by the collapse in commodities prices. Yet, some countries have fared better than others and could be poised for currency rebounds. India, the Philippines, Malaysia and Indonesia are examples of countries that have benefited from cheaper commodities. Others, such as Russia and Brazil took early and sharp policy measures such as letting their currencies depreciate, raising domestic interest rates and tightening fiscal budgets and are weathering the storm better than Nigeria, South Africa, Gabon and the Congo Republic.

Analysis & Forecast: Commodity-linked currencies have sharply weakened against the US dollar, euro and yen, mirroring the fall in commodities prices over the last two years. However, the slow rebound in commodities (figure 2) combined with effective policy action has helped select currencies stabilize and IHS Markit has favourable outlook for Russia, Brazil and Kazakhstan. Today, IHS Markit upgraded Russia's sovereign risk rating to investment grade. More broadly, Purchasing Managers Index data from IHS Markit show that, as a group, emerging markets economies are expanding (figure 3). That said, our outlook is less optimistic for countries such as Nigeria, Azerbaijan and smaller African energy exporters, which may not have the right policy roadmaps in place to capitalize on firming commodities prices. 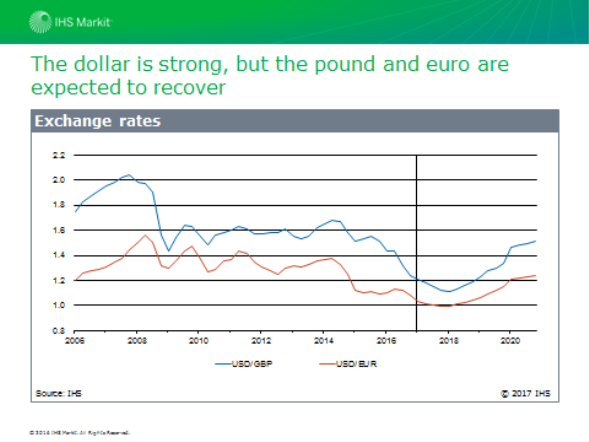 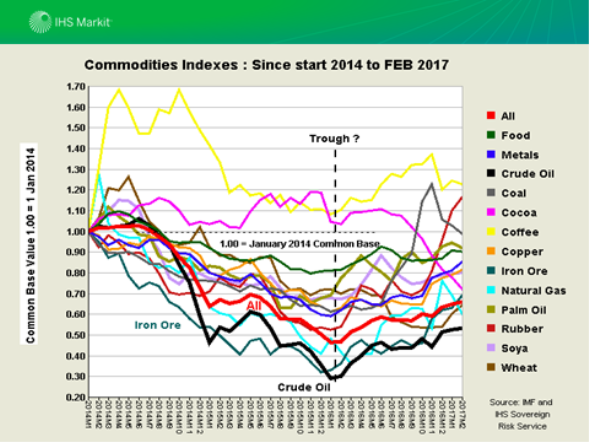 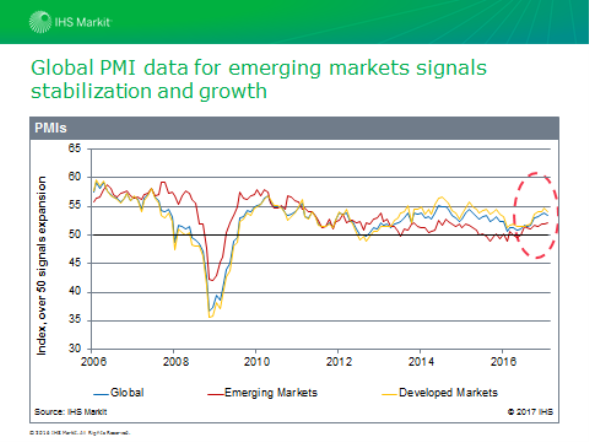 Did you miss our recent North American corporate actions webinar? Watch the on-demand version to hear our panel of… https://t.co/6SJEjSTmlb