The ECB's decision to restrict acceptance of Greek guaranteed bonds has seen Greece's credit continue to deteriorate, with both bond and CDS traders treating the country with increased bearish sentiment.

On January 4th, the ECB announced it will restrict the acceptance of Greek government and government guaranteed bonds as collateral for ECB operations; essentially blocking the country's lenders' access to cheap liquidity. Greek stocks crashed as a result, with Greek banks taking much of the brunt in what has already been a tumultuous start to the year for them.

The decision came as negotiations between the European leaders and Syriza continue to stall. Syriza wants an easing to austerity measures placed on the Greek public while the Europe maintains its hard line stance. The decision was taken to suspend the waiver placed on Greek bonds (since they are rated junk) early.

It is worth noting however that banks still have access to ELA (Emergency liquidity assistance) provided by the Bank of Greece. While this may not be as cheap as direct ECB funding, it does provide a credit line in the meantime, and explains why Greek bank's CDS had a modest reaction today. 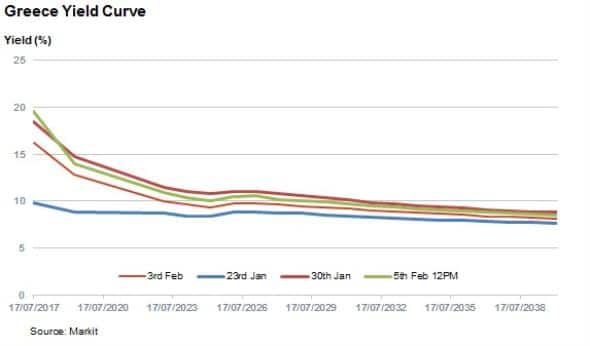 As the news of the ECB decision broke, bond markets reacted severely with the short end of the yield steepening sharply. The 3.35% bond due July 17th jumped up 310bps from close yesterday. It has been a turbulent start of the year for Greece as leaders and finance ministers battle for supremacy over demands, causing much short term uncertainty on whether Greece will remain in the eurozone.

This shifting sentiment is well represented when comparing the Greek yield curves over at certain points over the last month. Just before the election, short term yields were hovering at around 10%, but soon widened as the market reacted to the hard stance from Syriza leader Alexis Tsipras. Some progress, in the form of talk of a plan to swap existing debt for debt linked to economic growth, was welcomed earlier this week by the market where short term bonds rallied (bringing down yields). But this was short lived as both parties continue to play hardball. The recent news also had a marked impact on the country's CDS spreads, which widened again to near to highs seen late last week. Greece's Greek 5yr CDS closed yesterday upfront 39.5%. This means it would take $100,000 per annum plus and upfront cost of $3.95m to insure against $10m notional. This implies a probability of default of 69%. The level as of 1pm London today is 41%, signalling further deterioration.