The UK economy ended 2016 on a high, with business activity growing at the fastest rate for almost one-and-a-half years. Hiring has also revived alongside upturns in new orders and business confidence, but prices continue to rise sharply. All of which adds weight to the argument that the next move by the Bank of England is as likely to be a rate hike as a cut.

The Markit/CIPS 'all-sector' PMI rose from 55.1 in November to 56.4 in December, its highest since July 2015. At 55.3, the average reading for the fourth quarter is consistent with the economy expanding by 0.5%, with growth accelerating throughout the quarter.

UK economic growth and the PMI 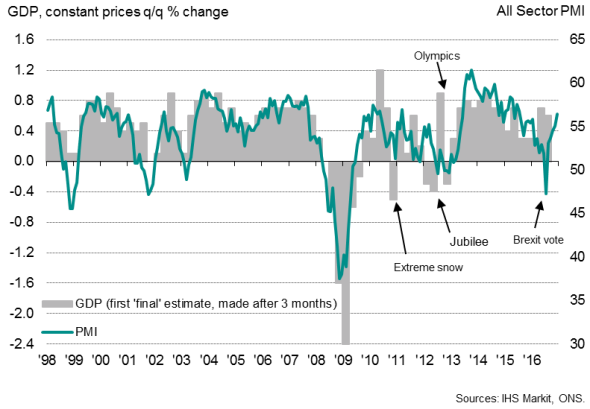 Improved rates of expansion were seen in all three major sectors of the economy in December. The vast service sector recorded the largest monthly gain for 17 months, with growth having accelerated for a third straight month. Manufacturers saw the second-largest increase in output for two-and-a-half years, just shy of September's peak, while construction firms reported the biggest rise in activity for nine months. 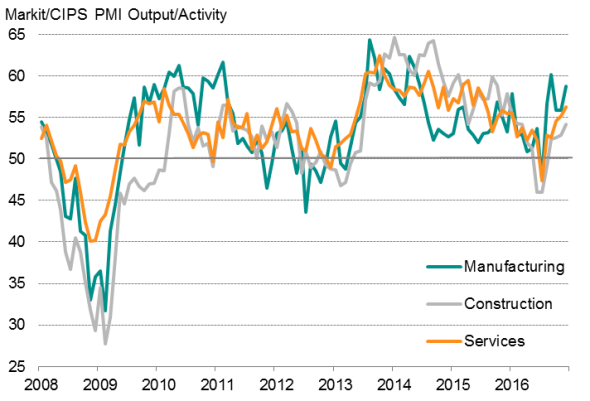 Growth of new orders also picked up in each of the three sectors in December, resulting in the sharpest overall improvement in demand since March 2015 and boding well for a further acceleration in business growth in January.

The strengthening of demand helped improve the business mood, with optimism about the year ahead perking up to the second-highest since June's Brexit vote in both the construction and service sectors. On the other hand, the overall level of optimism remained low by historical standards, primarily reflecting widespread concern about the extent to which Brexit may affect business conditions over the course of the coming year.

Business confidence in the service sector 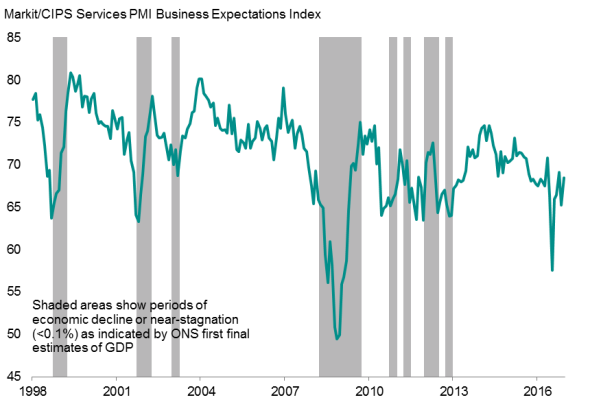 Workforce numbers were boosted to the greatest extent for eleven months amid the greater optimism and stronger demand seen in December. While employment growth in services merely returned to levels seen earlier in the year, factory jobs were created at the sharpest rate for 14 months. 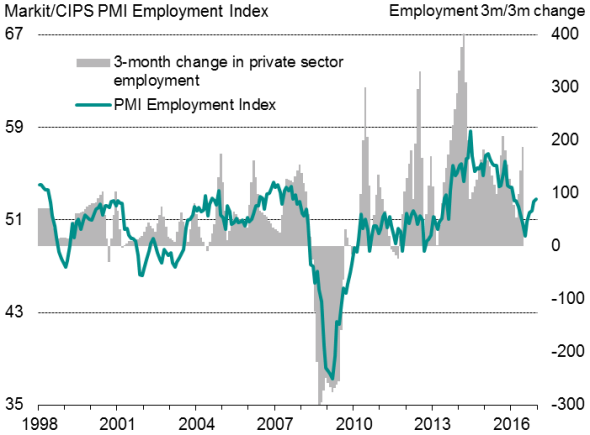 However, there were few signs of the weak pound boosting spend from overseas tourists in the service sector. Service sector expansion was driven by business service providers and financial services, though with transport and communications and IT also showing robust growth. Activity in the hotels and restaurant sector fell for a second month running.

Growth in the construction sector meanwhile looked more balanced than in prior months. House building remained the fastest growing sub-sector, though civil engineering and commercial building also picked up.

The negative aspect of the weaker exchange rate was again highlighted by average input prices rising at one of the fastest rates seen since early-2011, commonly attributed by companies to higher import costs, exacerbating already-higher prices for many globally traded commodities such as oil.

Average prices charged were pushed higher as increased costs were often passed on to customers, with December seeing the largest monthly increase in selling prices since May 2011. While manufacturing saw by far the steepest rise in selling prices, service sector charges also rose at a rate not seen since early-2011. 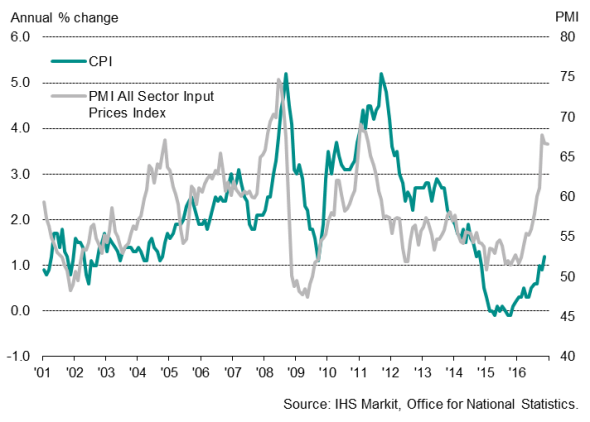 From a policy perspective, the latest improvement in the PMI pushes the surveys up into territory which would normally be associated more with the Bank of England tightening policy rather than loosening. However, policymakers will consider the current resilience of the economy alongside the elevated levels of uncertainty highlighted by the historical weakness of business optimism about the year ahead. Any change in policy therefore looks unlikely in the short term, but the next move in policy could as much be a rate hike as a cut. 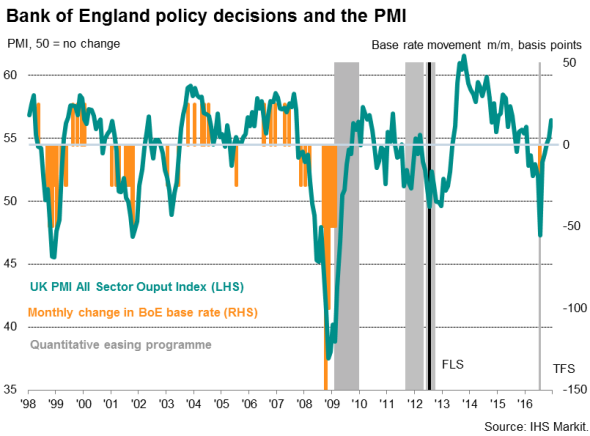