The global economy ended 2016 on a robust footing, according to PMI survey data, enjoying the fastest growth for over a year. The upturn was accompanied, however, by the largest rise in firms' costs for over five years, hitting emerging markets especially hard.

The JPMorgan Global PMI, compiled by Markit from its various national surveys, edged higher from 53.3 in November to reach a 13-month of 53.4 in December. The latest reading rounded off the strongest quarter since the third quarter of 2015 and represents a marked improvement from the weak growth signalled earlier in the year. The latest data are consistent with global GDP rising at an annual rate of just under 2.5% in the fourth quarter. 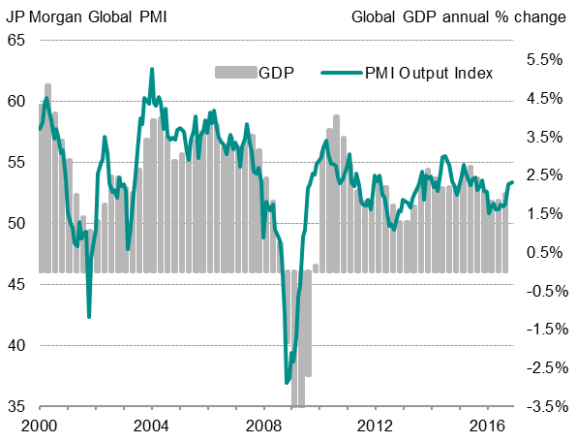 Other sub-indices suggest growth is likely to continue to accelerate in early 2017. Inflows of new business rose globally at the fastest rate since July 2015 and firms added to their payrolls to the greatest extent seen since May 2015. 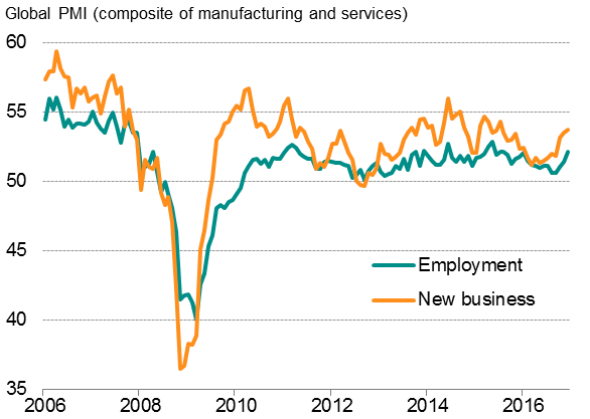 The strengthening of global economic growth and demand has been accompanied, however, by rising inflationary pressures. Average input costs showed the largest monthly jump since September 2011. 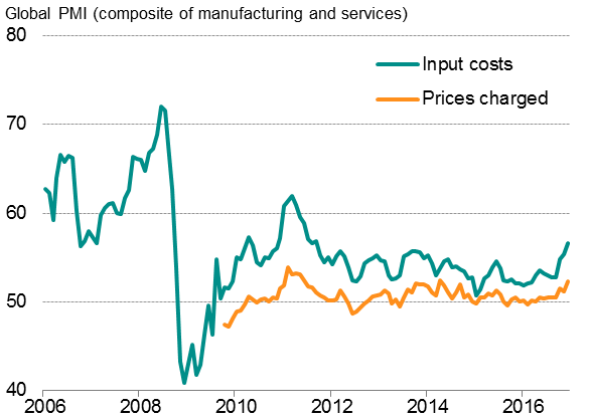 An especially large cost increase was seen in manufacturing, where the rise was the steepest since May 2011. The increase commonly reflected higher oil and other commodity prices, though service sector costs meanwhile rose at the sharpest rate since January 2014, often linked to higher fuel prices.

In many cases, the strengthening of the US dollar was also reported to have led to higher prices for dollar denominated imports.

Average prices charged for goods and services meanwhile increased to the greatest extent since April 2014 as higher costs were passed on to customers, with the bigger gain seen in manufacturing. However, the increase in prices charged was considerably weaker than the rise in input costs, suggesting margins continued to be squeezed.

The squeeze on margins signalled was greatest for emerging market companies, where the difference between inflation in average selling prices and costs was the largest since March 2011, highlighting the difficulties that many developing countries are facing amid the rise in oil prices and the depreciation of currencies against the US dollar.

Although the pace of emerging market expansion perked up to a 27-month high, the rate remained weaker than seen in the developed world, where business activity growth was maintained at November's 12-month high. Moreover, the increase in employment seen during the month was driven by the developed world. Emerging market payroll numbers continued to fall, albeit again only modestly, often reflecting the ongoing need to restructure to manage costs. 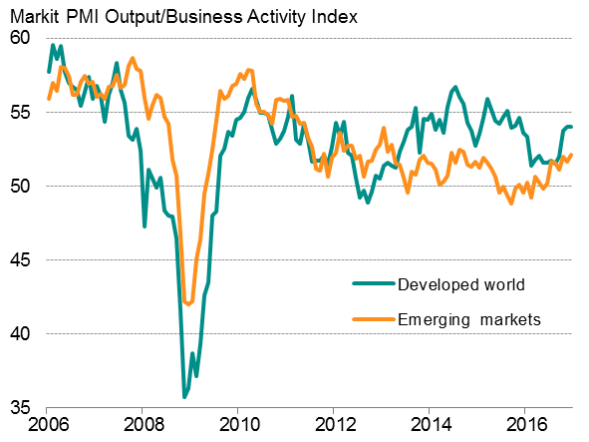 Growth was increasingly broad-based across the major developed economies. US growth slowed, linked in part to the stronger dollar, but remaining one of the strongest seen over 2016. In contrast, faster rates of expansion were seen in the UK, eurozone and Japan, aided by weaker currencies. 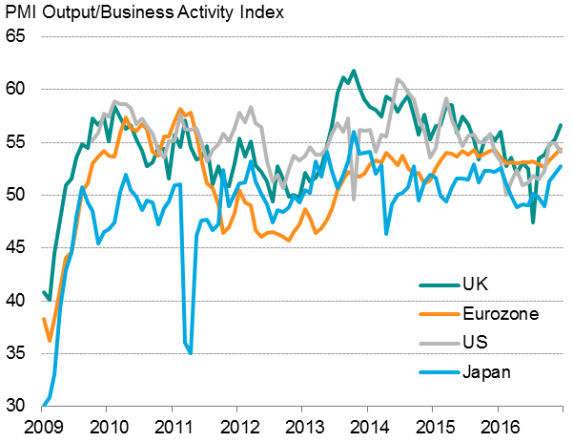 Of these four developed economies, the UK enjoyed the strongest pace of expansion, with the PMI signalling the fastest growth for almost one-and-a-half years and consistent with the economy growing 0.5% in the fourth quarter.

The dip in the US PMI in December meanwhile was only modest and left the surveys signalling 0.4-0.5% (2.0% annualised) fourth quarter growth. An upturn in hiring at the end of the year also suggested that firms are expecting the December slowdown to be temporary.

The Eurozone PMI also indicated GDP growth of 0.4% in the fourth quarter, with growth accelerating in December as business activity rose at the fastest rate since May 2011. Employment was also reported to have risen at one of the fastest rates seen over the past five-and-a-half years.

The Nikkei PMI surveys meanwhile indicated that Japan's economy expanded at one of the fastest rates seen over the past three years in December, suggesting GDP growth is set to accelerate to around 1% in the fourth quarter.

Of the largest emerging markets, the strongest growth was seen in Russia, where the PMI surveys signalled the joint-fastest expansion since before the global financial crisis. Much of the upturn was driven by improved demand in the domestic market, in part fuelled by higher oil prices, helping employment rise for the first time in over three-and-a-half years. 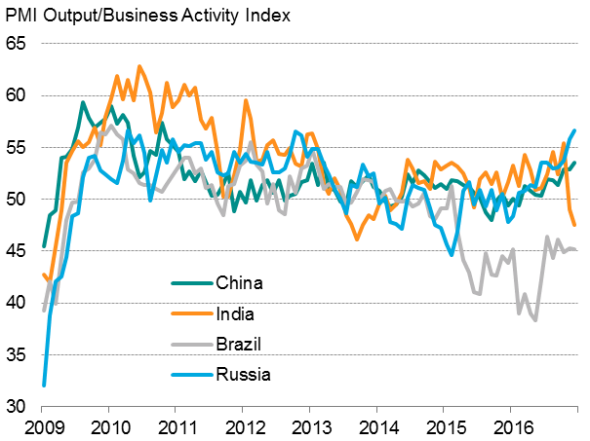 Growth also accelerated in China, according to the Caixin PMI, reaching the joint-highest since the start of 2011. Growth picked up in both manufacturing and services, though employment continued to decline due to factory job cuts outnumbering new service sector jobs.

The PMI surveys for India and Brazil, on the other hand, continued to signal economic contraction in December. The former, which was the largest decline for over three years, was largely attributable to disruptions to business arising from the recent withdrawal of high-denomination bank notes.

Brazil continued to record the steepest downturn of the four 'BRIC' economies. A further dip in the December PMI pushed the fourth quarter average below the third quarter. However, the renewed weakening was confined to manufacturing, with services registering the smallest decline for three months.