Japan's economy lurched back into life at the start of the fourth quarter, with business surveys showing the strongest rate of growth since January. 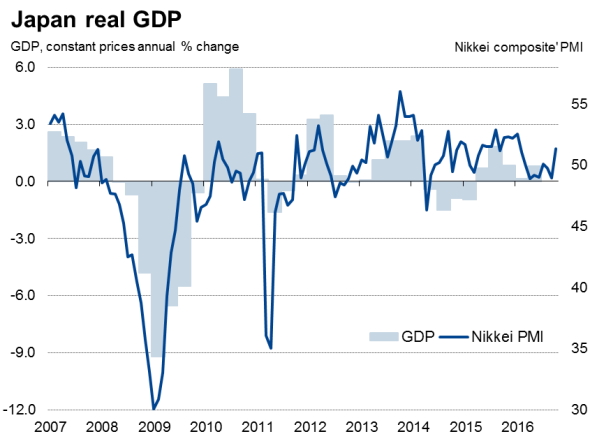 The composite output index from the Nikkei PMI surveys, compiled by Markit, rose from 48.9 in September to a nine-month high of 51.3 in October. Although signalling only a modest expansion, the improvement raises prospects of the economy having gained momentum in the fourth quarter, with the PMI having signalled mild declines in the second and third quarters on average.

The PMI correlates well with GDP (it exhibits a 70% correlation with real GDP and a 79% fit with nominal GDP, with the PMI acting with a lead of two months). However, as we've noted before, the PMI should be seen as an alternative measure of the economy to GDP, the latter being subject to frequent revision after initial publication and thought by many to be prone to error. In contrast, the PMI is not revised, is available well in advance of official data and is published on a monthly basis, making it the timeliest guide to the overall economy. 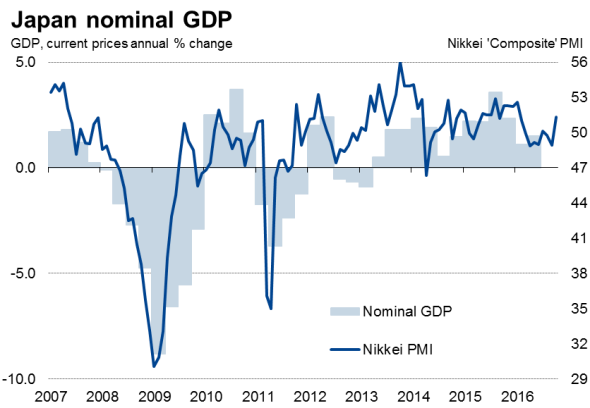 October saw manufacturing output grow at its fastest rate since last December and services grew, albeit only moderately, for the first time since July. 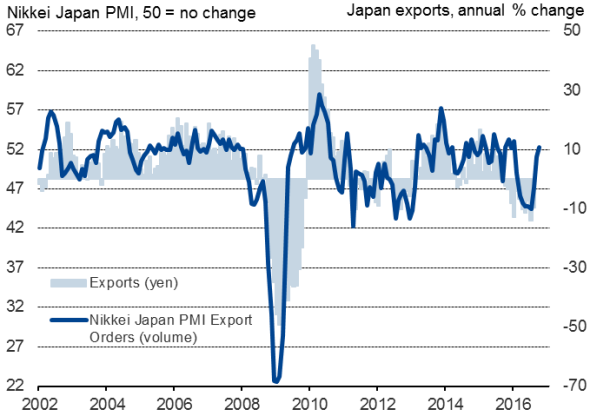 Improved export trade was a key driver of the manufacturing upturn. This is partly due to supply chains returning to normal since the earthquake-related disruptions earlier in the year, but companies have also reported an upturn in overseas orders, the latter also helped by the drop in the exchange rate. The yen depreciated 2% against the US dollar on average in October compared to September.

Growth was not limited to manufacturing, however, with the service sector showing renewed expansion after two months of decline in August and September. The upturn in services hints at a welcome improvement in domestic demand and was driven by the largest increase in new business to the sector since February.

Hiring and price pressures on the rise

The surveys also showed a welcome upturn in employment. The rate of job creation was still only modest and driven entirely by the manufacturing sector but nonetheless showing the largest rise in private sector employment since May. 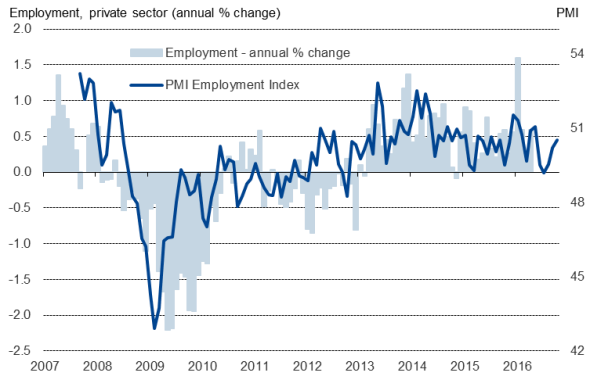 The weakened exchange rate meanwhile led to higher import costs, which alongside a strengthening of many global commodity prices (notably oil) caused average input costs to rise marginally for a second successive month, showing the largest rise since January.

However, the overall increase in costs remained only slight and failed to feed through to a rise in average selling prices, although the rate of decline in prices eased to the weakest for five months to suggest that the rate of deflation has waned. 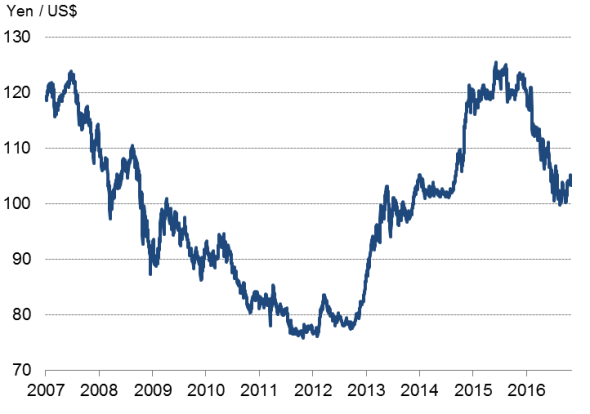