The rate of economic growth rebounded in October, rising from the near two-and-a-half year low seen at the end of the third quarter, according to PMI survey data.

The all-sector PMI rose to a three-month high of 55.7, up from 53.9 in September and fuelled by faster rates of expansion of both services and manufacturing business activity alongside robust construction sector growth.

The improvement pushes the PMI above the average reading of 55.3 seen in the third quarter. While the September PMI surveys had signalled an easing in the pace of expansion from 0.7% at the start of the third quarter to just 0.3%, the October PMI is consistent with the economy growing at a quarterly rate of 0.6% (see our research note explaining how to interpret the PMI readings for economic growth). 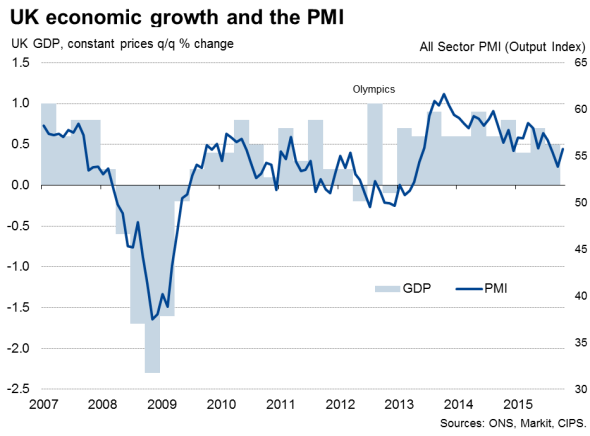 If the PMI maintains its current level in the closing two months of the year, the economy is on course to have grown by 2.4% in 2015.

The faster rate of expansion raises the possibility of an interest rate hike before the end of the year if a further improvement is seen in November. Bank of England governor Mark Carney has indicated that a decision on whether to raise interest rates will come into sharper relief around the turn of the year.

The argument for policy to be tightened is further bolstered by the survey showing new orders across all three main sectors of the economy to have also risen at an increased rate in October, boding well for further solid growth of business activity in November. Job creation also revived, with the latest survey registering the largest monthly net gain in jobs since March. Employment rose at an increased rate in all three sectors. 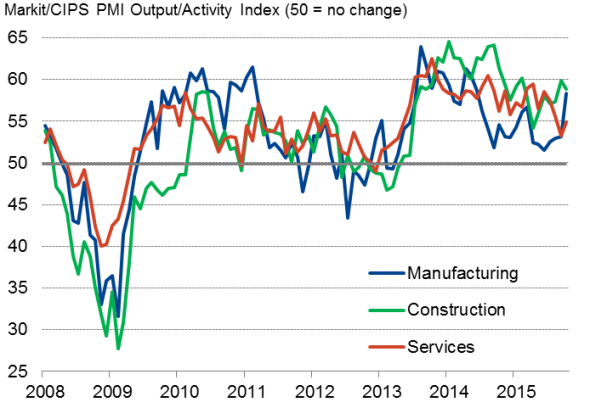 Dovish policymakers will stress, however, that average prices charged barely rose for the third month running in October, suggesting that there is no need to rush into raising rates due to a lack of inflationary pressures. Factory gate prices in fact fell at an increased rate, driven down by sharply lower raw material prices, and charges levied for services rose only marginally on average.

Manufacturing output growth accelerated especially sharply, rising at the fastest rate for 16 months to suggest that factories may be pulling out of the recent weak patch. Manufacturers reported fuller order books due to strong domestic demand and improved export sales. 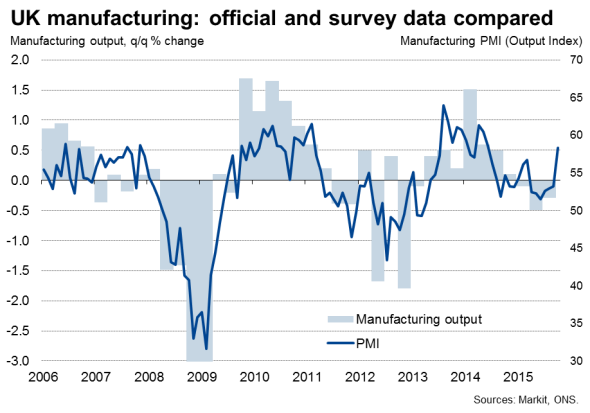 A welcome improvement was also seen in the service sector, where business activity grew at a faster rate for the first time in four months. However, the rate of expansion remains far weaker than seen earlier in the year. Moreover, doubts over the ability of the sector to sustain such strong growth are raised by the fact that the level of optimism towards the 12-month outlook for activity dropped to its lowest for two-and-a-half years. 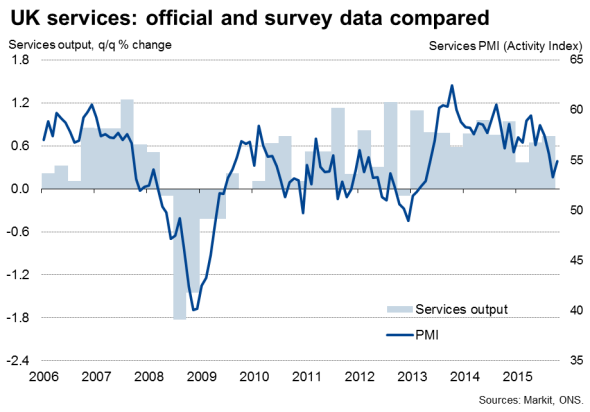 The construction sector bucked the trend, with growth slowing in October, though continued to show the strongest pace of expansion of the three sectors for the third successive month. Furthermore, construction sector optimism about the outlook rose to a four-month high.

The construction sector PMI data continue to paint a very different picture to the latest official data, which showed a steep decline of building sector output in the third quarter. The survey data, in contrast, point to buoyant growth, albeit weaker than seen last year. 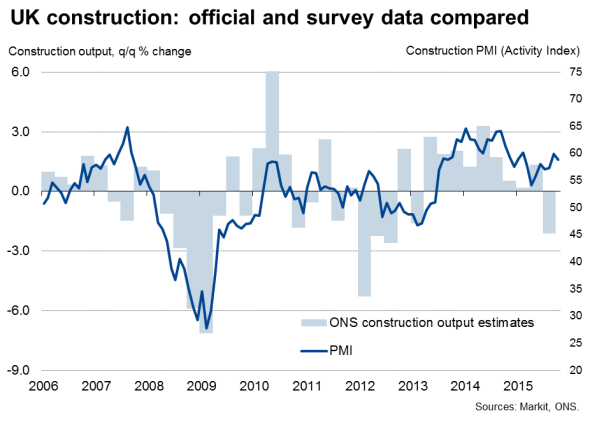