With developments mirroring the recent plight of high cost oil producers in the face of sinking oil prices, we analyse investment flows and sentiment towards gold as the precious metal price points towards $1000 per fine ounce.

The US dollar looks set to strengthen as one of the largest quantitative easing experiments in history has finally come to an end. Expectations are that interest rate increases are on the horizon as inflationary pressures loom post the recent respite of depressed energy prices.

Last week the Bank of Japan announced that it would be increasing the country's asset purchasing program, taking the symbolic baton of global liquidity provider. It seems that the stage is set for a period of sustained dollar strength.

Now that gold's pricing currency is set to appreciate, the precious metals ability to keep afloat above $1000 looks set to tested. With commentators becoming increasing perplexed with recent declines, and camels and rhombuses making the rounds on newswires and financial news networks, it seems the historic safe haven is in for a turbulent close to the current woes.

Gold and precious metal ETFs have continued to see outflows in recent weeks as the case for shiny metals deteriorated. So far this quarter, the 325 precious metal ETFs have seen outflows of $1.34bn, which is already more than the $1.28bn seen in the three months to the end of September. This takes the year to date outflow tally to just shy of $3bn. Issuers can take some comfort in the fact that this is only a fraction of the $40bn pulled from the asset class over 2013. 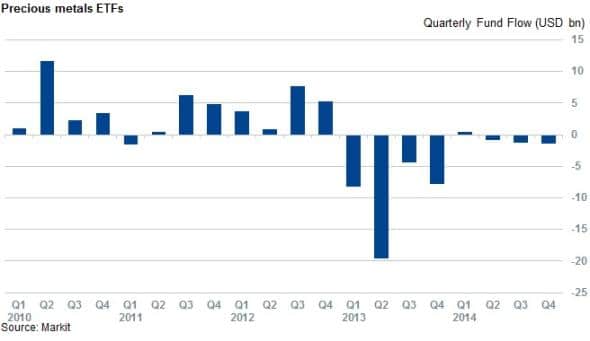 The majority of outflows were absorbed by the SPDR Gold Trust, whose assets peaked in 2012 when it managed $76.7bn in October. This was before cumulative steady outflows totalling $35bn over the next two years. These outflows, combined with the recent fall in the value of gold, have seen the ETF's AUM sink to $27.8bn - roughly a third of its peak. The fund has also seen the majority of outflows since the start of the year, suffering $2.1bn of outflows since January.

The world's largest gold producer by volume in 2013 was Canadian based Barrick Gold. The company's share price has already declined by 30% year to date. With mounting pressure on the gold price, the company and peers such as Kinross may face a credit downgrade according to a recent article by Bloomberg. Kinross has seen some increased short selling activity since the beginning of the year as its share price tumbled 50% this year, but the current demand to borrow remains relatively insignificant. 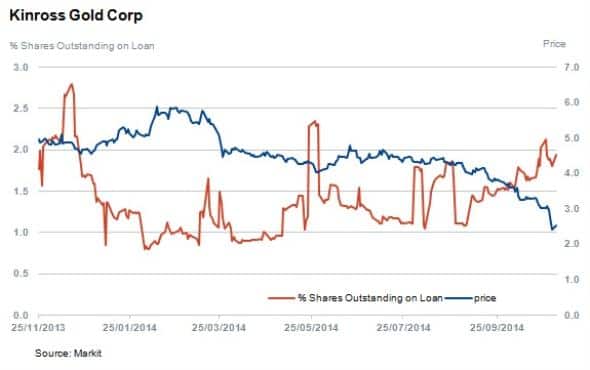 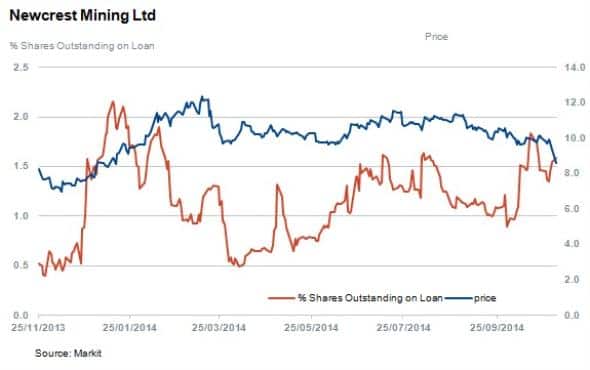 Newcrest is relatively flat so far this year after retreating 20% from gains made earlier in the year. Shares out on loan have tripled though from 0.5% to 1.6% of shares outstanding since March 2013, but again short selling is the name is fairly subdued. 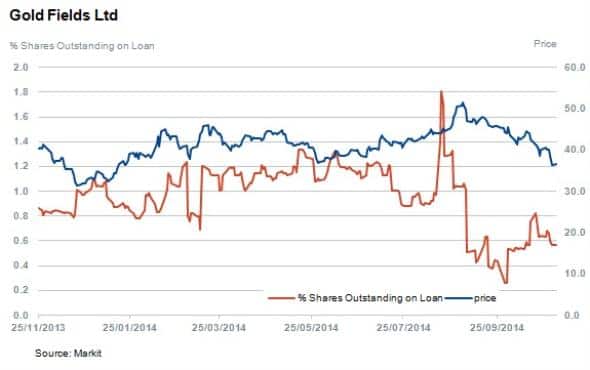 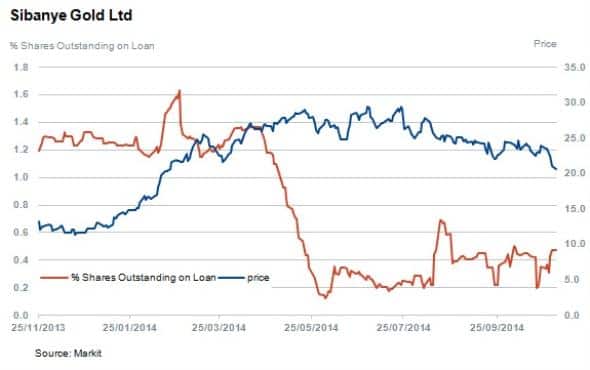 Shorts seem to be happy to stay among minor gold producers as the constituents of the Market Vectors Minor Gold Producers ETFs have attracted more short activity than their larger peers.